Added some more pictures taken before Procol Harum played at Wolf Trap in the USA (thanks, One-Eye)

Added a Procol memoir from a new contributor (thanks, Demetrio)

Added a page about a new way of listening to Grand Hotel (thanks, Paul)

Added a new ticket to this page (thanks, Gian Carlo)

Added another example to the Whiter Shade of Parlance page – look for 'Fudge' (thanks, Martin Awsop)

Added a great review of Procol Harum in Finland (thanks, Charlie)

Added the setlist from Procol Harum's free concert in Bergamo

Added the setlist from Procol Harum's return to Äänekoski

Added a review (received this month) looking back to Procol Harum's previous showing at tomorrow's festival venue (thanks, Ian)

Added a good squirrel specimen to this page (thanks Sue; thanks, John)

Added again to this Finnish planning page (thanks, Paula)

Watch three video-clips – here, here and here – for some news about the history-making plans of  two ex-members of Procol Harum and the true meaning of the word 'gig' (thanks, Charlie)

' ... at their heaviest and most dangerous ... a long, moody reading with the base metal elements clearly to the fore ...'

Added a review (received this month) looking back to what Procol Harum were doing exactly a year ago (thanks, Ian)

Added news of a Gary Brooker concert in August [cf the Haiti benefit that is commemorated on YouTube and elsewhere] (thanks, Paul)

Added some nice information about a special train service to a Procol Harum show (thanks, Jorma)

Exactly twelve months since the London screening, added a review of the restored Separation DVD in which 'the most irresponsible man on God’s earth' explains how to become a filmmaker, and we learn that 'They all got on extremely well, Denny, Michael [sic] and Stanley'. (thanks, Ian)

Added a review of the eighth Procol / Salvo re-release (thanks, Dmitry)

Added a third page of photographs, taken on the occasion of Procol Harum's showcase gig at Tarrytown, USA (thanks, Bert)

Added a great Procol Harum review and illustration (thanks, Bert)

Added the brochure for the free Procol Harum show in Bergamo (grazie, Stefano; thanks, Martin)

' ...real seagulls circled and cawed when the Brooker/Reid masterpiece was played ...'

Added a final June 2010 concert memoir –  one more instalment, in essence, of this indispensible book about Procol Harum on stage (thanks, George) 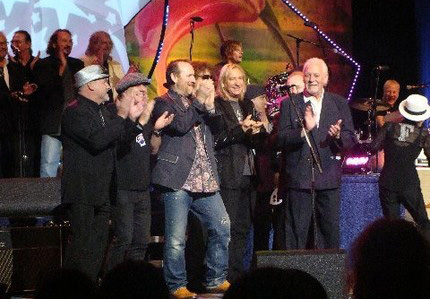 Click the picture for details ... Ringo Starr turns 70 with Gary Brooker on stage among many world-class rock stars

Added some pictures and comments from Procol Harum's recent show at Atlantic City, in the USA (thanks, Chris and Carol)

Thanks everyone for the continuing submissions of photos etc: in which connection, please look at this important guidelines page

Added another June 2010 concert memoir – an additional chapter, one might say, of this entertaining book about Procol Harum on stage (thanks, George)

Added a June 2010 concert memoir – a further episode, effectively, of this excellent book about Procol Harum on stage (thanks, George)

Added some photographs of members of Procol Harum, and their fans, with the inimitable Unsteady Freddie (thanks, Unsteady)

If you like those, have a look at these; if you don't, try these insteady

Added a page of concert photographs from Procol Harum's showcase gig at Tarrytown, USA (thanks, Bert)

' ... this band is so strong that all concerns shall be vanquished ...'

Added a vivid recollection of Procol Harum on tour in 2010 on a night when the organ broke down (thanks, John)

And of course you can buy a recording of a gig when exactly the same thing happened, a little while ago now

Thanks everyone for the continuing submissions of photos etc: in which connection, please look at this important guidelines page

Read the current month's what's new at this website

Read what was new at BtP in previous months