'Beyond the Pale' seems to have been instrumental in some holiday get-togethers, or gets-together, of disparate fans from various countries whose habitual interactions are confined to the cybersphere or to Procol concerts and Palers' Band rehearsals ... here is a growing archive of snaps depicting such merry events:

Linda and Roland (not illustrated) marvel at one mere corner of the huge Treasure-Archive maintained near Amsterdam by
Procol scholar Frans Steensma, pictured here with the Procol Promo Box, one of the rarest items in a remarkable collection 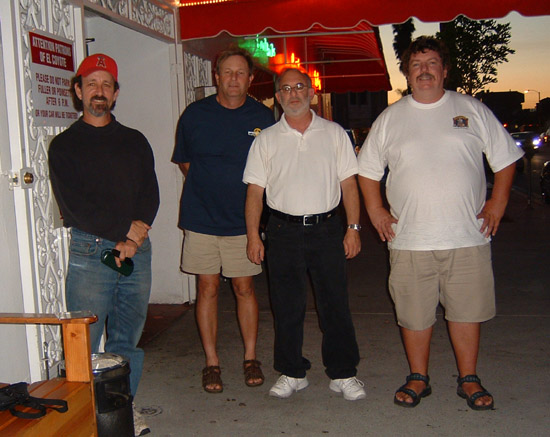 Jeremy Gilien, Bernie Mases, Al 'One-Eye' Edelist and Kurt Harding ...
getting together in front of El Coyote in LA (photo by Jill McMahon)

First meeting for an organist from LA and a film-maker from Clapham: Anglophile Jeremy Gilien drove thither
with all the aplomb of a native, and Henry Scott-Irvine showed a preliminary cut of his  Procol documentary

Outside the famous barn, Messrs Brooker and Gilien, who had last met on British soil at Cropredy a year before

Jeremy and Roland in Bristol, with Isambard Kingdom Brunel's famous Suspension Bridge spanning the Avon behind

London: Palers Peter Christian and Jeremy Gilien (left) with One-Eye and Roland (right): Henry (behind) shows them the plaque
that marks the Soho studios where the Fisher-produced tracks from Home, heard on the Copping Brothers video, were recorded

Palers Karl Severson, Gary Johnson, Al 'One-Eye' Edelist, Jeremy Gilien (in Shoreham by Sea tee-shirt) and Jill McMahon gathered on the occasion of a gig at The Temple Bar in Santa Monica, in May 2005, by LA's fantastic Conjunto Jardín, who play the highly acclaimed Conquistador on From Shadow to Shadow. Gary is the arranger of that track and '... is a whiz on keys and percussive gordos and the like that made one think his twitching body is working in time to an unused mushroom.' writes One-Eye. 'His wife, Libby, intrigued us with beautiful vocals and fine guitaring ... About four songs into the set, Gary called out, "Is One-Eye here?" "Of course," I responded with a yell. Gary then dedicated the next song to the Palers in attendance and with emotive inflection stated "Procol Harum Rules!"'

Nothing remarkable about seeing these three close relations together ... except they are thousands of miles from home:
Pat, Allen and Evan Edelist in the Royal Albert Hall, while Cream are playing onstage.
In the same row, Palers Peter Christian, Roland, Linda and Peter from Bristol and BtP

Stefano (right) from Rome, in a Los Angeles restaurant with his three sons, Jill McMahon and Pat 'Two-Eyes' Edelist (left)

Stefano (right) from Rome again, with the Los Angeleno One-Eye, both in merry mood

Procol Harum fans Sue and Alan (see him in music-making attire here) got together in November 2005 for the specific purpose of
getting married! Paler matrimony is to be encouraged so let us hope this example spawns further such musical yokings. The
lookers-on are Alan's daughter Holly and Sue’s son Chris.

Stefano and Martin Awsop in front of a very limited part of the incredible and huge Whiter Shade of Pale collection.
The whole room is filled up with  LPs, CDs (and other memorabilia) containing different versions, in different
languages, of the world famous song. Really amazing! 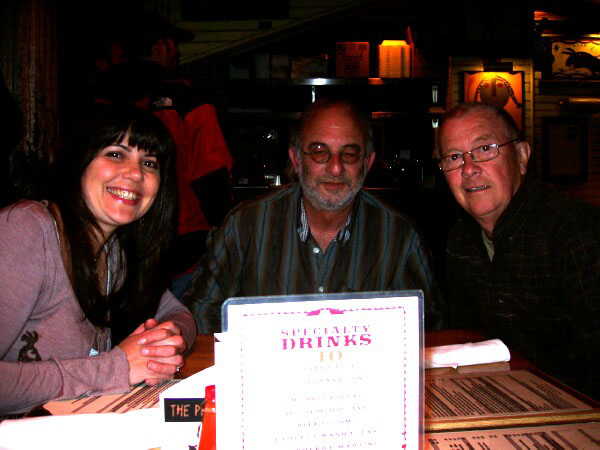 2006: at the House of Blues in LA, Sarah Wilson (BJ's daughter) and Mick Brownlee (the Paramounts' drummer)
were St Patrick's Day guests of Al 'One-Eye' Edelist (centre, behind 'Speciality Drinks').
More pictures from this happy event may be seen here 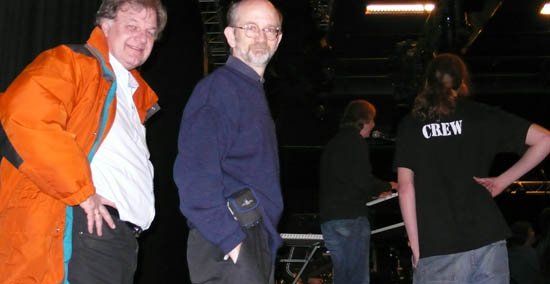 December 2006: Hans Tammes and Roland from BtP: sidestage during a Kayak soundcheck in Holland
More pictures from this happy event may be seen here 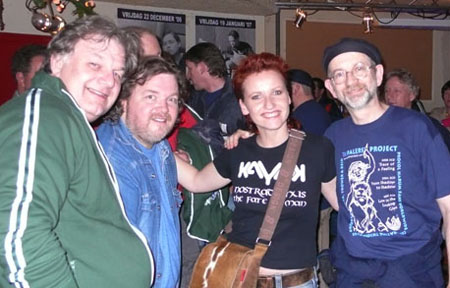 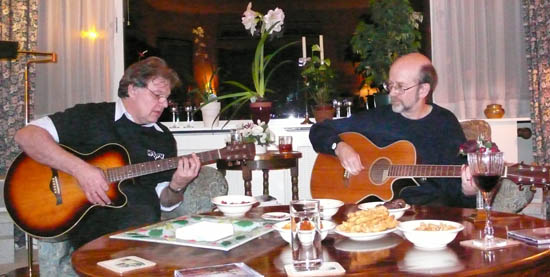 After the second Kayak gig in two days ... Hans and Roland, two guitars, many snacks.
Not pictured, but nonetheless present, Jens from BtP and One-Eye from LA

Martin ('Awsop') and Carmen Barbero from Barcelona make a reciProcol visit to
the home of Stefano and Anna Ciccioriccio (from Rome), February 2006

'We were treated excellently by our friends,' Martin Awsop reports

Swiss Procol fans in Los Angeles! Click the photograph for the full story 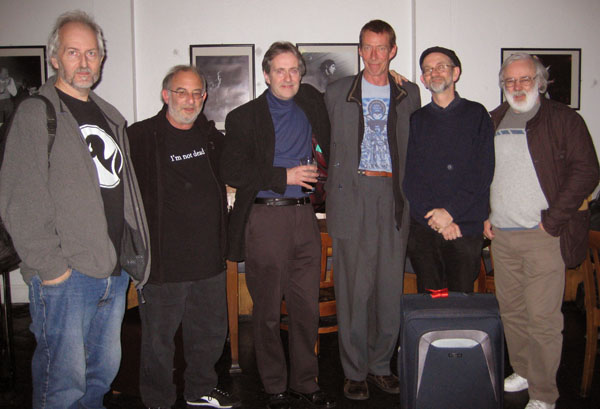 LA's Allen 'One-Eye' Edelist visits the Barcelona home of Martin Awsop, to be
pictured in front of part of his immense Whiter Shade of Pale collection. 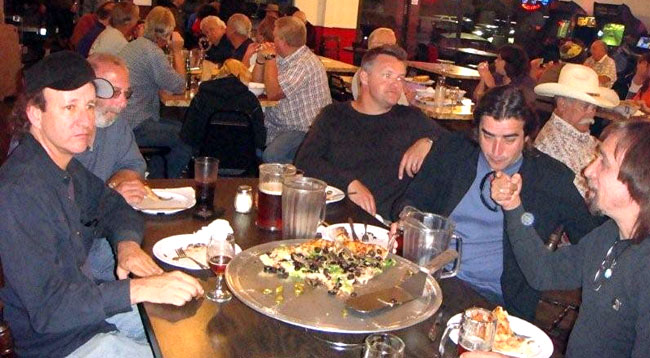 Josh Phillips, with his musical partner Dan McGrath, visits Los Angeles to collect an award
and is entertained by some of the Procol fans in the area. Click the image for more shots

Unsteady Freddie, Allen ‘One-Eye’ Edelist, and Bert and Carina Saraco meet and have lunch at a New York City diner
in Spring 2008. One-Eye’s daughter used one of her eyes to shoot the picture….

Martin urges: 'Take a look to his car (WGL 1PH). George explains: 'The licence plate was
a 50th birthday present, for me signifying that "William George Lovell" [WGL] considers
"Procol Harum to be the number one progressive rock band of all time" [1PH].'
At least that was the logic behind the idea!

May 2008: terrible shot of a brilliant occasion: Gary Haggarty from Essex, visiting Roland from BtP when Robin Trower
and his band played The Thekla, Vivian Stanshall's 'Old Profanity Showboat', moored in Bristol Docks 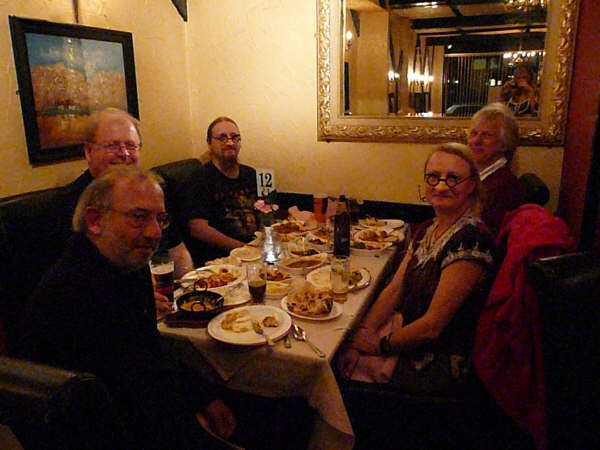 At a curry house in Kent: One-Eye from LA, a Norwegian webmaster and his son,
a Procol manager and his partner: click here for the whole story

26 October 2008: Heidi Widmer (centre) flew from Zurich to Bristol UK to join Linda and Roland from BtP aboard The Thekla for a great gig from Andy Fairweather Low
and the Low Riders (feat. Dave Bronze). The band played for 100 minutes, and the menu was Champagne Melody / Zazzy / Hymn 4 My Soul / Reggae Tune / Mystery Train /
Rocky Raccoon / When I Grow too Old to Dream / Slowly I'm Falling / La Booga Rooga / Sweet Soulful Music / Be Bop'n'Holla / We Shall Not be Moved / My Baby Left Me /
Rolling and Tumbling / Will The Circle Be Unbroken / Women be Wise / Peeping and Hiding / Shine Your Light / I Don't Need / Natural Sinner /  Lightning's Boogie /
Gin House / Wide-Eyed and Legless / Bend Me Shape Me / (If Paradise is) Half as Nice

Kaleidoscope Ken Stasion, Dave Knight, and Don Milione. Dave had flown across the water with his family in May 2008, and was attending a Trower gig
Ken writes 'I had the great pleasure to meet our hero Dave 'Shining' Knight and his really great family at Don Milione's house. I met Dave's wife Liz
and their two very cool kids Holly and Mike. Don's girlfriend Cindy was also there, keeping us all satiated with her incredible culinary skills. Well, I
brought over two Vox Cambridge Twin 30s, my Rick 370 and Rick 481. As Don powered up his keys, he rattled off Rule Britannia to make our limey friends feel
at home ... We did play Dear Mr Fantasy, Long Tall Sally, About To Die then Dave jokingly played the opening to Play That Funky Music White Boy.
I couldn't resist playing those James Brown minor 9th chords underneath, and Don just went crazy playing Hammond and ragtime piano runs over it all.
It really was so much fun. We took a break and as I went to Don's amply-supplied beer cooler, Don and Dave broke into the lead guitar part from
Repent Walpurgis. Well, that was music to my ears. Dave played a killer solo. We had a great time for a bunch of White Paler People!' 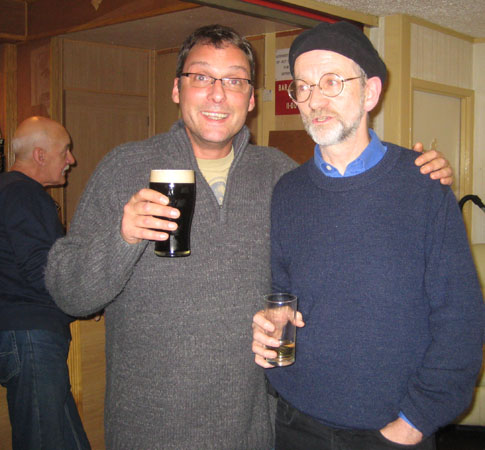 One-Eye (left) and Henry Scott-Irvine (right) with Jack Bond, director of Separation, whose use of  Procol Harum
compositions brought this group of fans together in London in July 2009 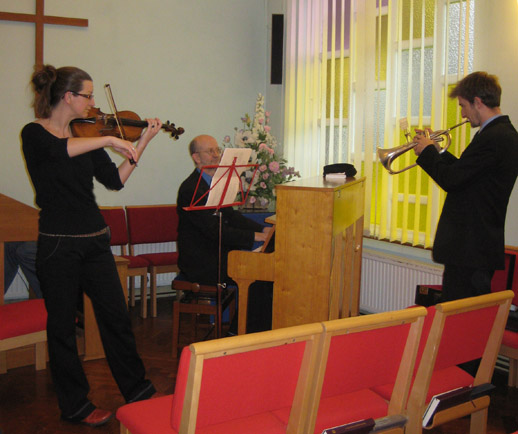 One member of this family is playing a rhinestoned flugelhorn ... more detail, if required 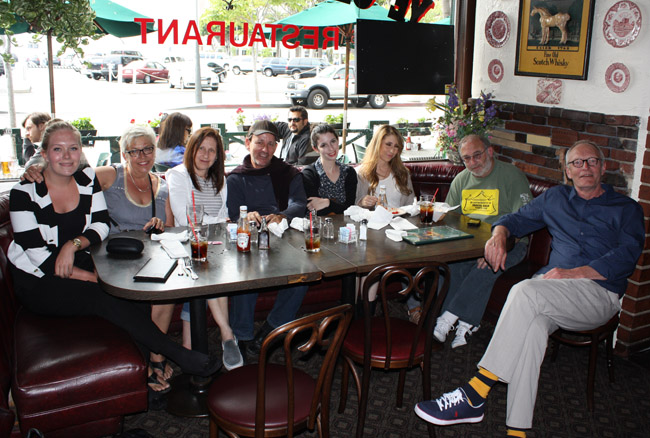 Three households'-worth of Procol Harum fans, from California and Denmark, get together: click here for who, what and where

George Bertok (left), composer, music-teacher and arch Procol-fan, left Ontario for a touring holiday in the UK in July 2010.
The photo shows him meeting John Cabot on Bristol's historic harbourside, whence the explorer set forth (in 1497, in the
Mathew) to discover (from a European perspective) North America. Also shewn, one of the BtP webmasters ... now read on

Lunch for Justesens and Ravnaases, at the house of Mogens and Pia Vinther (left-hand side of the table)
in Aalborg, Denmark, after a Jethro Tull concert in Randers the previous day

In June 2010 Procol Harum went to the USA, and so did one of the 'Beyond the Pale' webmasters, with two Danish Procoholics.
He took this picture of sightseeing on the river in Chicago (left to right, Ingelise Justesen, Titti Ravnaas, Jens's empty seat, Peter Justesen)

In Glenview, outside Chicago, where the house of Jens's uncle and aunt (reciprocally, holidaying in Norway) was at the Scandinavian party's disposal.
In addition to those pictured above on the river trip, Jens's cousin Inger and her husband Rick are seated to the right in this shot

Fellow-pianists/organists in LA ... click the photo to know more 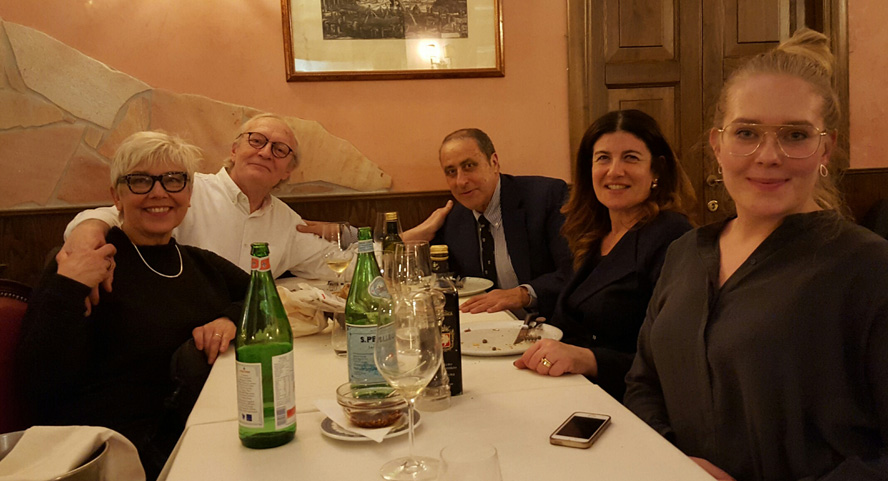 Helle and Henrik (from Dernmark) with Stefano and Anna (from Rome) and Laura (from Denmark) ... ... click the photo to know more
As Stefano writes (February 2016), 'Pictures of a nice reunion that together with my wife Anna we had yesterday here in Rome with Henrik, Helle and their daughter Laura.
For sure when you meet friends you invite them for dinner and in this case it was a nice pizza all together.