This song is the album's novelty item, following in the sporadic tradition of Souvenir of London, Boredom, Mabel and so on. Ostensibly a paean to healthy eating – and as such an antidote to the tales of excess that pervade the preceding album – it is nonetheless also shot through with playful sexual imagery, which the voluptuous quasi-Caribbean presentation is presumably intended to enhance.

At a literal level, the song has claims to being the title-track of the album, whose cover painting by Jakob Bogdani (1670 – 1724) was originally entitled merely Birds and Fruit. However the picture does not show juice, seeds and so forth, nor any expectant dogs or victims of disease, so we can scarcely claim that Keith Reid's song has grown out of the image. More likely the painting was selected on its own merits, a decision perhaps clinched by the part-overlap with a song in preparation. ('We named [the album] after the painting because we liked it and we hate the idea of naming any more albums after one of the cuts on it,' said Keith Reid here). The picture is compiled with some artifice: the fruit itself looks like a still-life, but the presence of the three various birds and the rampant vegetation suggests just the opposite. Yet if these creatures are real, it's hard to believe that they would have left such a trove of posed peaches and grapes unsampled. The picture shares none of the messy, sensuous emphasis that Reid places on pulp-gulping, but its superimposition of two frames of reference is precisely mimicked in the song's ingenious words.

Focussing on the interpolated word 'exotic' in the album-title, and reading 'birds' in its slang relation to women, the thoughtful observer may find the ground being prepared for a realization that Fresh Fruit has a subtext recommending particular sexual specialisms; readers of a prudish disposition will doubtless not want to visit this intelligent link about 'dirty' blues songs, nor to contemplate the notion that the present song (whose blues origins are evident in the chord sequence of the opening bars, and in its characteristic flattened melodic seventh ) is a covert paean to cunnilingus, as a pleasure in itself, and as a way to avoid disseminating sexually-transmitted disease. 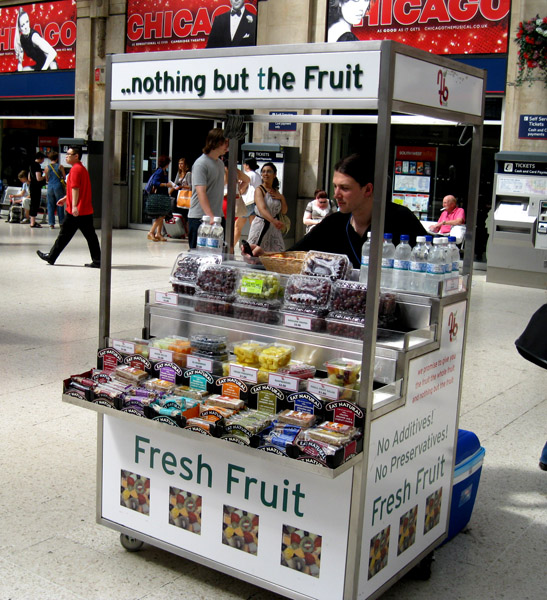 Though Brooker has been known to improvise references to genuine foodstuffs (hear oranges, chives (?) and coconuts in this mp3) while performing Fresh Fruit on stage, a rock audience hearing references to bananas, lost cherries, and so on is not likely to imagine they are hearing a lecture on nutrition. Keith Reid's song, with its references to Vitamin C and so on, achieves a more coherently fruit-oriented surface-meaning than Robert Johnson looks for in 'squeeze my lemon 'til the juice runs down my leg': and even when the joke is decoded – as it surely must be, if we are to find anything funny about Fresh Fruit – we sense that his intention is not so much to purvey a smutty double entendre as to model himself on well-crafted, risqué novelties such as I'm Going to Bring a Watermelon to my Girl Tonight, covered in a 1966 rarity by the Bonzo Dog Doo-Dah Band.

Fresh Fruit is in G, like the numbers before and after it on the Exotic Birds record – a rare lapse of variety for Procoldom. The music itself is in a jaunty four time, harmonically straightforward, slightly varying its blues-basis by visiting alternate chords a fourth above the expected ones. The chorus goes poppily up into the subdominant C major, and passes through a pleasing B7th into E minor, before coming home in unremarkable fourths. The guitar solo, conventionally placed, stays close to the vocal melody, including its characteristic and highly-emphasised flattened seventh; the organ swirls about engagingly, and the marimba or xylophone (presumably Brooker, though Matthew Fisher is credited with that skill on Boredom, the last Procol outing into tuned percussion) nicely offsets the nimble boogie piano. Like the equally diet-oriented Mabel (and like Piggy Pig Pig of course) this song makes use of sound effects that are generated in the studio, rather than being lifted from effects libraries.

Maybe, like the equally suggestive Souvenir of London, this recording accumulated its surprising soundscape in the hope of becoming a novelty hit single (the next time the marimba surfaced, on Pandora's Box, it worked!). The whistling here has none of the nostalgic quality of Lennon's Jealous Guy whistling; rather, it reinforces the aura of innuendo with its cocky suggestion of a nonchalant window-cleaner at work (Oddly enough we also hear a whistle, albeit non-melodic, on the preceding track). In the heyday of hack songwriting, the potential of a hit depended on the 'old grey whistle test': a melody strong enough for the old grey studio doorman to pick it up, and whistle it, had a good chance of success. This epithet became the title of the UK's premier serious TV rock show of the 1970s, hosted by Bob Harris, whose whispered song introductions, so different from the inane jollities of many of his predecessors, were regrettably excised from the commercial release of Procol Harum's 1974 Radio 1 concert. But the whistler has in general been a despised species in popular music: few all-out whistling assaults on the charts have succeeded, though one-hit wonder Whistling Jack Smith took I was Kaiser Bill's Batman (Deram DM112) to number 5 in a chart run overlapping with that of A Whiter Shade of Pale in 1967. Other whistling hits like Roger Miller's England Swings (hit in 1965 and 1966) and the South African Roger Whittaker's numerous smashes followed the mainly-vocal formula offered on Fresh Fruit. The whistle record to which Fresh Fruit bears most conspicuous relation is Guy Mitchell's Singing the Blues [UK No.1 late 1956] with which it seems to share some key musical passages.

Gary Brooker encourages our investigation of the song's sexual content with his determinedly sensual declamation of 'squeeze', and 'squeeze a little more there'; but he simultaneously sends it up in a stage introduction (Vienna, 1975) with the improbable suggestion that Keith Reid will be 'chucking bananas about during this one' (mp3 here). In another introduction he curtly advises that 'this one's about grapes'. There was no mention of any subtext when (at Bilzen, 18 August 1973) Keith Reid enthusiastically told OOR, the authoritative Dutch Rock Encyclopaedia, that he had just written a song called In Praise Of Fruit, and quoted some of its lines while implying that he had worked on this topic because fruit-eating was, to him, a simple enjoyment.

Keith said then that he had finished half of the songs for the new album, but Gary still hadn’t started on the music! Such was the band's heavy touring schedule (see here) that Brooker did not find time to write most of the music until early December 1973. Procol Harum did not tour again until 28 February 1974, so the band clearly had no opportunity to road-test most of these songs … Fresh Fruit certainly presents some difficulties for live performance, since (perhaps because of a mismatch between independently-written music and libretto) some double-tracking is required to fit in the words at the ends of verses: this overlapping is highly unusual. Stage performances were closely modelled on the album version of the track, though the whistling (which was hard to keep in tune) copied the vocal melody, not the recorded variant; the overlap vocals were taken rather indistinctly by Cartwright or Grabham, who also contributed some goofy ad-libs as the song wound up. The song saw active service in promoting the album, and was enthusiastically received by audiences, but has seldom been heard since.