Homburg and Other Hats 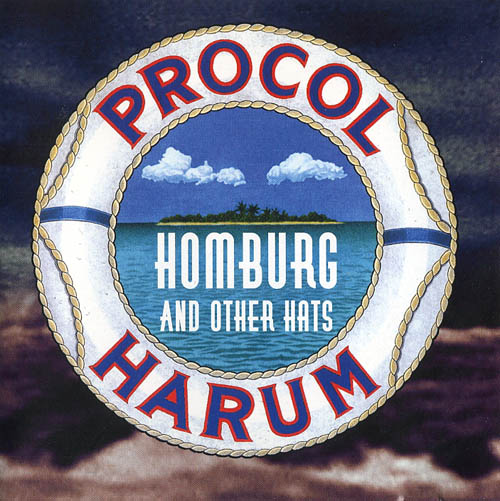 Some songs define a year: others, more rarely, define an era. Procol Harum's A Whiter Shade Of Pale does both, evoking not only 1967 but the beads, bells and bliss spirit of other-worldly abandon represented by that year's Summer of Love.

Yet dig deeper than this greatest of hits, and you'll find many more facets to the group that was once compared with America's Band for an unusual line-up containing both piano and organ. They originated in Southend, a very English holiday resort renowned for the country's longest pier, in 1961 as the Paramounts, playing US-penned rhythm and blues to a club clientèle. And long after the pop charts had lost interest, Procol were turning out classic rock that found a worldwide audience.

Barefoot Eurovision queen Sandie Shaw could have predicted such international acclaim: the Paramounts had been her first backing band! 'They were young, their hair was long and shaggy ... their music was good too,' her autobiography recalled. The pairing wasn't to last long – but, given a year or two and a change in direction, the newly-renamed Procol Harum were at Number 1 and had, to borrow Sandie's title, 'the world at their feet'.

The combination of pianist Gary Brooker's distinctive vocal and the often enigmatic words of non-playing lyricist Keith Reid was the foundation on which the success story was built. The stately Homburg reached Number 6, but the band's first LP failed to include either of the hits and so failed to chart. Things looked brighter in the States: the follow-up album Shine On Brightly reached Number 24, while an impressive appearance at the Miami Pop Festival turned a six-figure attendance into fans in a matter of minutes.

By this time, ex-Paramounts Robin Trower and BJ Wilson had entered the fold on guitar and drums, while 1969[sic]'s Home saw yet another arrive. Chris Copping doubled on bass and organ, giving Trower the space to increase his contribution. (Listen to Whisky Train, his homage to Elvis Presley's Mystery Train.) Even so, Robin quit after 1971's Broken Barricades to front his own outfit which, with its uncomplicated blues-based rock, soon attracted a bigger audience than the band he'd left.

Procol's 1970s output on the Chrysalis label has long been both unavailable and underestimated: Grand Hotel, Exotic Birds and Fruit ('a let's get back to rock' album, according to Gary Brooker) and Procol's Ninth from 1973-75 all have much to commend them. From the first-named, we sample both the majestic title track and Souvenir of London, a tongue-in-cheek track which tells of the same 'social disease' the Paramounts had described in 1963's Poison Ivy.

That R&B classic, first waxed by the Coasters, had been written by American legends Jerry Leiber and Mike Stoller. And interestingly, they were the choice to replace long-time confederate Chris Thomas as producers of Procol's Ninth. It was a daring experiment that straightaway led to friction: ' they wanted us to do an album of their songs!' recalls a bemused Brooker. Problem resolved, they turned in an album that not only charted higher than any original LP since 1969 but yielded a Top 20 hit single, Pandora's Box, featuring the incisive axework of Mick Grabham.

The story that had started so promisingly tailed off in a welter of personnel changes: Procol lacked the strength to withstand the new wave and disbanded in 1977 after Something Magic. Gary Brooker went on to play with Eric Clapton and record solo albums, and it seemed the world had heard the last of Procol Harum.

Yet the 1990s saw three unexpected postscripts, beginning with a 1991 band reunion to record the all-new Prodigal Stranger. Next came an orchestral version of their best-known pieces (featuring Brooker, Trower and original organist Matthew Fisher) which, like their stunning 1971 recording with the Edmonton Symphony Orchestra from which Conquistador is taken, proved that rock and the classics are far from incompatible. Finally, ex-Eurythmic Annie Lennox paid personal tribute to the first record she ever bought by taking A Whiter Shade of Pale back to the charts in 1995.

Covers, classical or otherwise, are all very well – but as this comprehensive collection shows the originals are well-nigh unbeatable. Turn back the clock, wind up the volume and enjoy English rock at its best.

(thanks, Jill, for typing)