Liner note from the Castle CD re-issue
Grand Hotel was something of a Tour de Force for Procol. The recording of the album began in April 1972 at a time when the band were [sic] enjoying a well deserved renaissance. Procol's Live In Concert With The Edmonton Symphony Orchestra was at number 5 in the American album charts and their single Conquistador was at number 16. Special orchestral concerts ensued over the next 18 months with Procol playing with The Los Angeles Philharmonic at the Hollywood bowl [sic], The London Philharmonic at London's Rainbow Theatre, and Das Orchester Der Muenchner on a tour of German speaking countries. Tracks from the forthcoming Grand Hotel débuted at these gigs. 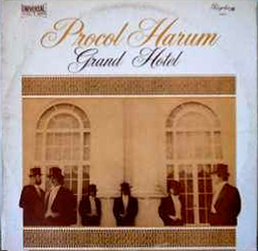 Released in March 1973 Grand Hotel featured new man Mick Grabham on guitar in a Procol line-up which would remain constant for half of that decade. Grabham thought so highly of Procol that he turned down the opportunity of joining former Free artiste Andy Fraser and his band. The UK music press raved about the album. But was it a concept album? The cover showed the band in front of The Grand Hotel at Lake Leman in Switzerland suggesting that it might be. In truth it only reflected the epic title tack [sic]! Melody Maker reviewer Richard Williams felt that the title track lived up to it's [sic] subject; "Expanding on the mood of Van Dyke Parks created with "Hung velvet overtaken me, Dim Chandelier awaken me" in the Beach Boys' song Surf's Up. Keith Reid's lyric speaks of fine wine, rare meats, serenade and sarabande, Dover sole and Oeufs Mornay, Profiteroles and Peach Flambé, and around all this rich imagery Gary Brooker creates sad minutes [sic] and stately slow foxtrots, based on the rock rhythm but amplified by a superb arrangement for orchestra and chorus. He has really learned how to use this medium, making a joke of the most avant-rockers who try to borrow from classical music, and Grand Hotel stands with Whaling Stories and A Salty Dog as the group's finest achievements (they are, too, almost unique in that the more ambitious they get, the more they succeed)." 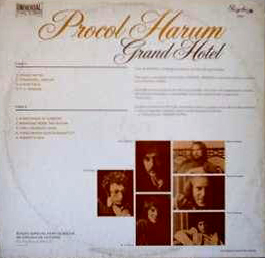 Keith Reid's lyrics display a black humour in the rocking Toujours L'Amour. "The song means long live love", confessed Reid, "And it is an obvious quip about the song itself". The ballad A Rum Tale shows Reid spoofing "love gone wrong", and the epic Tv Caeser [sic] is inspired by the TV chat show "Caesers" watched by people who should be eating their TV Dinners." A Souvenir of London was banned by the BBC because of it's [sic] subject matter and it [sic] features drummer (the late) B.J. Wilson playing 22 mandolins. Bringing Home the Bacon is a belter with classy guitar and organ work from Grabham and Copping, respectively, with arrangements by Gary Brooker that enable drummer Wilson to punctuate with impeccable rhythm. For Liquorice John, with it's [sic] phased piano and chromatic harp sounds, is dedicated to a school friend of Brooker's who committed suicide, and the lyrics nod in the direction of Stevie Smith's poetic line Not Waving, But Drowning. Fires (Which Burnt Brightly) is very European in flavour and could well have featured in a French movie by Claude Lelouch. It features the voice of Christianne Legrand, lead singer with the French based Swingle Singers - a lady with a magically resonant voice. As Andy Tyler said in Disc in 1973, "Her noo nah noo backings and scat solo near the middle are exactly right" (!) The concluding track is lyrically reminiscent of a song about a certain Doctor Robert by the Beatles, but Brooker's rumbling bassy voice refrains, and a full wall of sound production, helps to give this track a unique flavour, and a perfect ending.

Grand Hotel reached number 21 in the US Billboard 100, remaining in that chart for five months. It went on to earn Procol a UK Silver Disc.

Henry Scott Irvine 1995, transc. and [sic]ed by Mark Mott 2002:
thanks for deciphering the exiguous, OCR-defying ornamental font
which is hard to read even with a magnifying glass!