Above: two illustrations from the inner sleeve of the original vinyl issue of this album: the large shot (showing dead tree, Copping's real-ale tee-shirt, and something very odd on Barrie's jacket)
was not included in the Castle CD re-issue; the little shot (showing Keith Reid in contrastingly wintry attire) was reprinted by Castle, but reversed.

Liner notes to the Castle CD reissue: Procol's tenth album, Something Magic, was released in March 1977. It was produced by Procol Harum in conjunction with brothers Ron and Howie Albert at Criteria Studios in Florida - Procol's first [sic] studio excursion outside the UK. These studios had previously been used by the likes of The Eagles and the Bee Gees.

The album featured new member Pete Solley on keyboards, and for the first time in Procol's ten year history the Hammond organ was dropped in favour of a Yamaha [sic] to be used in conjunction with synthesisers, thus altering and adding to Procol's overall sound. Former organist Chris Copping moved over to play bass guitar following the departure of Alan Cartwright.

Side two of the album (the latter half of this CD) featured the concept fable called The Worm And The Tree, an allegorical 'Tale' which looked at 'life', 'death' and 'regeneration'. Keith Reid's lyrics were spoken by Gary Brooker instead of being sung, something that Brooker would later regret. Consequently, this hindered and led to poor reviews. however, upon listening to this for the first time in years, I am stuck by the strong melodies composed by Brooker - as well as his orchestral scoring. 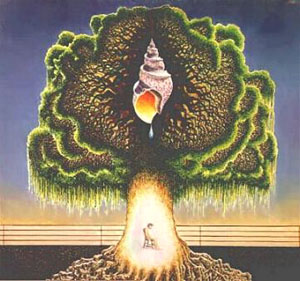 Patrick Humphries said this of the rest of the album in his March 5th review in The NME in 1977; 'The title track opens with a regal sounding orchestra heralding the entry of Brooker. It's a typical Procol song, with Reid's lyrics back in their natural domain of 'The dark hour of the soul, when nightmares take their toll' and the music demonstrating the grandeur for which Procol are renowned. The album's piece de resistance is Skating On Thin Ice with a melody that reminds me of a music box tune. Choir and orchestra blend beautifully behind Brooker's voice and piano, as he sings Reid's doomy, Tarot-inspired lyrics, while BJ Wilson's cymbals and Pete Solley's synthesisers swish away in good atmospheric vein. Wizard Man is a strong choice for a single (indeed, it became a single!) short and simply effective, filled out by Mick Grabham's restrained guitar. The Mark Of The Claw is up to scratch, and Strangers In Space is ethereal stuff'.

Procol saw the departure of Chris Copping at the end of the UK tour in Spring 1977. He was replaced by former Elton John bassist Dee Murray for the North American Tour. Procol played their last gig on their tenth birthday in New York in May 1977. Gary Brooker would go on to make three solo albums as well as joining Eric Clapton's band for several years. 1991 saw the return of Procol Harum and possibly their best album with the release of The Prodigal Stranger. Three tours of North America ensued.

The album that you are about to listen to has not been available on CD until now.