Westside Steve Simmons in Scene, May 1992

No piece of popular music is better known than Procol Harum's 1967 smash hit Whiter Shade of Pale; no lyric more widely recognised than 'We skipped the light fandango'.

Procol Harum, leaders in the genesis of progressive rock, created a style which fused rock, R&B, classical music and lyric. Through ten years and ten albums their music had been at times enigmatic, bitter-sweet, grand, satirical, morbid, violent and even humorous.

Whether written by masterful pianist and voice Gary Brooker, melancholy organist Matthew Fisher or powerful guitarist Robin Trower, Procol Harum's music is bound together by the common vein which runs through it all, the brilliant lyrics of Keith Reid. 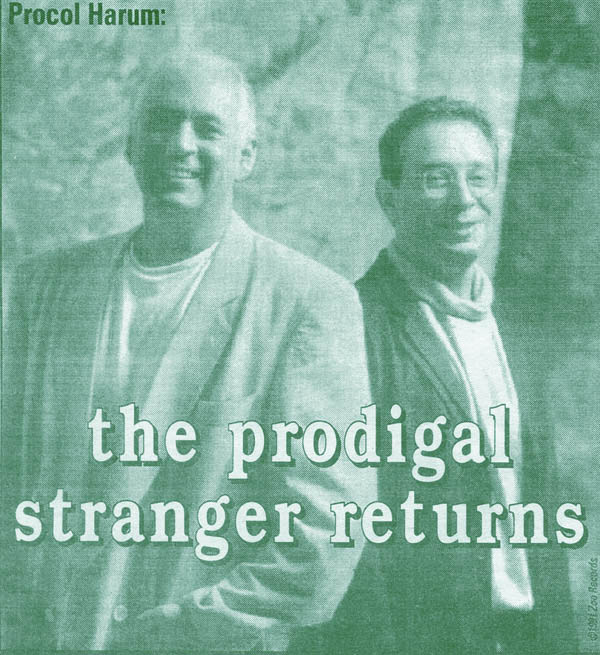 SCENE had the opportunity to speak with Reid about the reformation of Procol Harum, their collective past, their new album, The Prodigal Stranger, and their first tour in almost fifteen years (they appear next Wednesday, May 20, at North Coast Harbor).

You might think the author of such thought-provoking words would possess a dark personality, à la Poe, but Reid is a pleasant fellow with a quick laugh. "Really Mathew [Fisher] is much more like the way people think I am. Actually, I'm pretty light-hearted about the whole deal."

Reid also says his lyrics were never meant to be cryptic. "It's not like I try to be obscure. I always feel like it should be obvious what I 'm saying. You often use image [sic] to express what you're trying to say; but as a writer you hope that your use of the image is illuminating - and it should be."

After the landmark album, A Salty Dog, Procol Harum lost two of its members. Matthew Fisher left the group "for personal reasons".

"An important thing is that when Mathew left we decided not to replace him and carried on as a four-piece band with really not very much organ," Reid says. "That actually lent itself to Robin getting more into the writing end of things." [Trower left the band soon after the release of the Broken Barricades 1971 album].

"I think he felt, at that stage, there were things he wanted to accomplish as a guitar player that he couldn't do in the Procol Harum situation, and thought, if I don't do it now I never will."

Something Magic was Procol Harum's last album. In 1977, ten years after Whiter Shade of Pale, Reid and Brooker decided that the band was no more. From the song Worm and the Tree from that album comes a conditional epitaph: 'Yes although the great tree had fallen and died, they knew from the ashes a new one would thrive.'

Fifteen years later Procol Harum's new album, The Prodigal Stranger, is neither a cannibalisation of their previous work nor a sad attempt to appeal to a younger audience through cosmetic change. (Fisher and Trower are back on board for the album, Drummer Mark Brzezicki is new to the line-up, replacing Barrie Wilson who died in 1989, bass-player Dave Bronze, guitarists Jeff [sic] Whitehorn and organist Don Snow have been added for the tour.) The new record is a logical step in the progression of the group, a true collaboration of the artists rather than a collection of songs by a pool of separate egos.

"We're very proud of this record. It was a big decision for us to do it. We spent a long, long time working on it, writing songs and trying to make the best record we could.

"We didn't do it for the money - that's a point that needs to be made. If we had done it for the money we would have done it years ago. We've been asked so many times to re-form. As a point of fact, we worked on this for over two years and spent a lot of money before we even got a record deal."

According to Reid, there were questions that needed to be answered before the decision to re-form could be made. "Have we got something to say both musically and lyrically, and do we have enough to say to make a record? Because there's no point otherwise. Nobody's going to buy a Procol Harum album for any other reason than the quality of the music.

"It's not like there were half a million people waiting to buy this record. It's like you've got to prove yourself all over again."