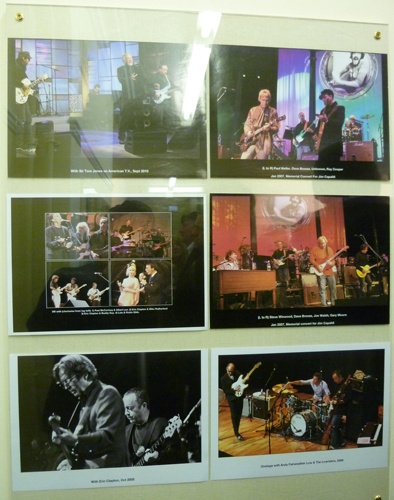 Has recently been working on an occasional basis with Belinda Carlisle, has gigged with Ray Davies (of the Kinks), and has until recently been playing with Paul Carrack on stage and on his most recent album, Beautiful World. Also played on most recent album by the fab Eric Bibb, and made an uncredited appearance on Gary Barlowe's last album, Incidentally

, Dave sent us this update:
Just a quickie. I'm currently producing (and playing on) a new Eric Bibb album, due out in May. Also involved in other production projects, as well as writing for TV and film with Josh Phillips.
I'll be appearing live with Eric Bibb over the coming months in the UK (eg hopefully at this year's Cambridge Folk Festival)

June 2004: another bulletin from Dave:


I have recently decided to leave Eric Bibb's band, having been involved for the last five years or so as bassist and producer. I am currently working with Amy Wadge, a female singer songwriter based in Cardiff, having produced her debut album Woj. We are about to embark on the forthcoming Jeff Beck UK tour as opening act. For more info see amywadge.com . On the Beck tour we are appearing as a duo, but often we play as a three-piece band, along with ex Catatonia drummer Aled Richards.

The highlight of the last few years was the Concert For George, which I am sure all PH fans will be aware of. What a night! What a band!

Sessions list: all non-PH and non-Paramounts records (up to 1986) to which Procol Harum members contributed