'Live at the Union Chapel' : liner-note

State of the Union

Islington's Union Chapel – elegant, non-conformist and Gothic – could have been built for a Procol Harum concert: such was the feeling among a multilingual body of fans, aged eight to eighty, who packed its pine pews one filthy December night, hungry for the music of this National Treasure that has captivated us since its hypnotic 1967 début.

'Old Testament' Procol had toured the world for ten years, recording ten seminal albums, now essential listening on CD; dormant until 1991, the band blossomed afresh (yes, there is an orchid named 'Procol Harum') with new songs and new energy. This 'New Testament' band toured until 1997, when Gary Brooker came into worldwide demand for Ringo's All-Starr Band, the British Rock Symphony, and Bill Wyman's Rhythm Kings. At the turn of the century, however, Procol's star rose again (and yes, there is an asteroid named 'Procol Harum'): twenty occasional gigs preceded the release in March 2003 of The Well's on Fire, recorded by the band's most durable line-up, one that had refined its onstage chemistry for a full decade before venturing into the studio. 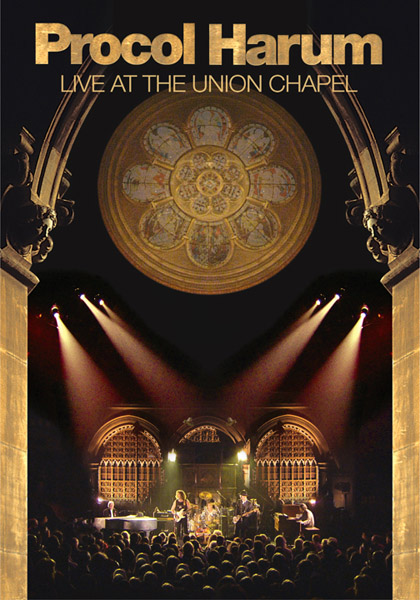 Islington is the final show of a superb world tour celebrating this new album: the day after its release, Procol kicked off in Norway, home of 'Beyond the Pale' (www.procolharum.com, among the web's most comprehensive music sites). Danish gigs followed – delighting throngs of prime Procoholics – then a theatre show in South London, before an eager multinational audience. In earlier days the 'new boys' in this line-up had contended with the memories of some great players, creators of the repertoire they'd inherited; now they were gloriously in their element with arrangements they'd originated themselves.

Very successful shows in Holland preceded the band's first German foray since 1993. (Brooker's 'rest-day' on this leg was spent playing the Albert Hall with his R&B ensemble, No Stiletto Shoes, which includes Eric Clapton – the Shoes have raised thousands for UK charities, and also formed the core band for 2002's George Harrison memorial concert). Procol next flew out to play Canada – where they'd recorded their first live album, with the Edmonton symphony orchestra – and some long-awaited East Coast US dates. Notably they re-conquered New York, a crucible of Harum fervour since the band's maiden voyage there in 1967: one club offered Procol a five-night residency after their first three gigs sold out. Their chops, and harmonies, were much applauded, and any lingering impression of highbrow stuffiness was dispelled when one number was introduced by an electronic rapping figurine, and when a toy bird ('Donald Seagull') was assassinated in a flurry of feathers at the climax of A Salty Dog.

Back in Italy and Germany, the setlist continued to evolve: this tour saw Procol play every song from their new CD – a testament partly to their musicianship, partly to the honest, pretty-well-live way it was recorded. Overall they performed 1,200 numbers in sixty-plus appearances – fifty different songs, representing all their albums: music not made at fashion's dictates is never going to sound dated. More Canadian concerts ensued, then America's West Coast. Memorably the open-air amphitheatre gig in LA was curtailed by a violent electric storm: the band compensated by dropping into their fans' party and resuming their set on equipment belonging to the website's Procol tribute group.

Headlining at Cropredy, Procol kept 16,000 British festival-goers enthralled by musical drama alone, disdaining elaborate sets or crowd-pleasing histrionics. Brooker's antics were limited to lobbing a pack of playing cards across the stage: for decades this peculiar brand of understatement has flummoxed the home media, who restrict their coverage to Procol's unfathomable name (from Latin, or a Burmese cat's birth-certificate?) and their infrequent showings on the singles chart (though they've outshone other ground-breakers like Floyd, Zeppelin and co!). The listening public, however, signal their appreciation each time Procol are voted 'all time best' in radio-station polls.

At three strikingly-lit shows in Japan – their first there since 1972 – Procol Harum were likewise received as musical heroes. Through Denmark and Sweden, then a seventeen-gig return to Germany, fans of all nations tracked Procol's progress via their website's nightly bulletins, glimpsing more of the self-deprecating humour that offsets their art: using toys acquired on the road, the band highlight images from favourite songs, until Buddhas, galleons, clockwork mice, 'Dubya' effigies, cuddly pigs and more bestrew the stage. Their gaffer-tape arachnid, however, alludes to a huge Huntsman spider's excursion across the sound-desk during a Japanese gig, not to a lyric. Procol's occasionally-inscrutable texts don't actually dismay non-English speakers: as founding-organist Matthew Fisher declared, 'They sound great, that's all they have to do.'

In Switzerland – birthplace of Brooker's wife Franky – the band triumphantly sold out Zürich's imposing Volkshaus. 2003's tour covered stages ranging from the Fillmore West's hallowed ballroom, through intimate clubs, to sprawling European festivals: Procol also handled radio broadcasts, journalistic interviews, and the perpetual swarm of enthusiasts queuing to shake hands and say thank you. The band sign memorabilia at the end of every concert, keeping one eye on the new disciples – young fans are a notable feature – and one eye on the odd hyperfan, obsessive enough to catch almost every American show and plenty on other continents beside.

Procol Harum attract worshippers throughout the world, but only on their native turf did they actually play in a church. Union Chapel has stood since 1877, on a site sacred for two centuries: inset over the vestry door is some of the very Plymouth rock that the Mayflower party alighted upon in 1620, a pleasing touch for tonight's transAtlantic pilgrims. This is the heart of Procol territory: Gary Brooker, the band's 36-year constant, was born in neighbouring Hackney, rehearsing the early band in church halls here in North London. Tonight's players live within driving distance; and lyricist Keith Reid, now resident in New York, was nonetheless spotted at UK and US concerts in 2003. Reid's latest output runs his characteristic gamut from angst to whimsy, via topical commentary and eclectic literary gleanings: This World is Rich recasts a Guardian newspaper feature, An Old English Dream adapts WH Auden. In Procol's words, as in their music, this union of opposites seized fans' attention from the outset: record after record was fuelled by judicious conflicts – intellect with instinct, melody with muscle, grandeur with grotesque, precision with passion.

At last the musicians make their undemonstrative way to the stage – the altar – and strike up their 'Underture': this conflation of 1967's Repent Walpurgis and 2003's Emperor's New Clothes neatly epitomises the continuity in their music. The chapel's unusual gradient ensures everyone an excellent view, and the arcaded galleries are a suitable vantage for bellowed requests! The cavernous vault delivers a twelve-second reverberation without assistance from the mixing-desk, and Procol – honed by averaging a gig every 4½ days since the new album's release – sound amazing. This would be a respectable year's touring for a band half their age, yet Procol look neither tired nor jaded.

Beyond the strength of the songs, and the vitality and finesse of the playing, there is rich entertainment in Brooker's patter – bafflingly oblique or downright hilarious – and in the interplay of personalities. The natty threads and hat of Matt Pegg contrast mischievously with the spray-on trousers and sloganed tee-shirts of Geoff Whitehorn; modest Mark Brzezicki powers everything along from behind his perspex screen. Musical jokes abound: Fisher's Question quotes Rachmaninov and Layla; snippets of Mickey Jupp and Johnny Nash are magpied into Brooker's own numbers. 'The Commander' had soundchecked in the handsome suit he'd worn that morning to Buckingham Palace to receive the MBE, recognising his musical work for charity: a tiring day even before the concert started!

Together band and audience scale many lofty peaks (and yes, there is a mountain named 'Procol Harum') in a concert of marvellously-generous proportions, eight of the offerings being taken from The Well's on Fire. Enjoy the consecutive canine contrasts, for example: loose, extended three-chord jamming on the rare Every Dog…, alongside the formal elegance and consummate harmonic strangeness of A Salty Dog, heard for the sixtieth time this year in unvaryingly-poignant arrangement. The crowd's howls of approval before the former, and rapture after the latter, exemplify the breadth of this band's appeal, the success of its new material. Fisher's Weisselklenzenacht – though lacking Brooker's soulful, mesmerising voice – is Procol's new signature: its stately Wesleyan structure, Gothic elaborations, and towering guitar finale chime perfectly with the Union Chapel's 'blustering High Victorian effect' (to quote Pevsner's The Buildings of England). And, finally, the same organ notes usher in A Whiter Shade of Pale, this time featuring the 'lost' verse that never made it to the hit single that eleven million of us own; true aficionados know of an even-more-lost fourth verse, very occasionally heard in concert … let's hope it's played on the next Procol Harum DVD.

As if to prove that this is a band like no other, Procol Harum conclude the evening in a nearby curry-house as guests of their hardest-core fans: despite wrapping up this dream of a year with end-of-tour valedictions, they're back onstage within a week, playing impromptu at the Brookers' Christmas charity fund-raiser. The state of the union? It's never been better!

Read the above liner-note in Portuguese

Read another liner note by the same author, written ten years later, for the reissue of this album