Perhaps 'grandeur' is the one word best characterizing the brand of musical and lyrical brilliance that Procol Harum has prided themselves in creating for over six years. For if that one term successfully summons powerful imagery of sturdy endurance, stately honor and towering attributes, then surely it is also synonymous with the individual and collective genius of Gary Brooker, Keith Reid, B.J. Wilson, Chris Copping, Alan Cartwright and Mick Grabham. 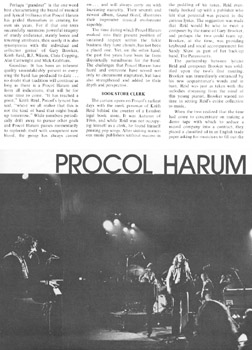 Grandeur. It has been an inherent quality unmistakeably present in every song the band has produced to date ... no doubt that tradition will continue as long as there is a Procol Harum and from all indications, that will be for some time to come. 'It has reached a point,' Keith Reid, Procol's lyricist has said, 'where we all realize that this is not the kind of band that might break up tomorrow.' While members periodically drift away to pursue other goals and Procol Harum pauses momentarily to replenish itself with competent new blood, the group has always carried on ... and will always carry on with increasing maturity. Their seventh and newest album, Grand Hotel, illustrates their impressive musical evolvement [sic] superbly.

The time during which Procol Harum evolved into their present position of sustained respect within the fickle business they have chosen, has not been a placid one. Yet, on the other hand, the past five years have been far from disjointedly tumultuous for the band. The challenges that Procol Harum have faced and overcome have served not only to circumvent stagnation, but have also strengthened and added to their depth and perspective.


The curtain opens on Procol's earliest days with the meek presence of Keith Reid behind the counter of a London legal book store. It was Autumn of 1966, and while Reid was not occupying himself as a clerk, he found himself penning pop songs. After visiting numerous music publishers without success in the peddling of his tunes, Reid eventually hooked up with a publisher who felt that potential was present in the curious lyrics. The suggestion was made that Reid would be wise to meet a composer by the name of Gary Brooker, and perhaps the two could team up. Brooker, at the time, was providing keyboard and vocal accompaniment for Sandy [sic] Shaw as part of her back-up band, The Paramounts.

The partnership between lyricist Reid and composer Brooker was solidified upon the two's first meeting. Brooker was immediately entranced by his new acquaintance's words and in turn, Reid was just as taken with the melodies streaming from the mind of this young pianist. Brooker wasted no time in setting Reid's entire collection to music.

When the two realized that the time had come to concentrate on making a demo tape with which to seduce a record company into a contract, they placed a classified ad in an English trade [sic] paper asking for musicians to fill out the instrumentation. Enter Matthew Fisher and David Knights. Fisher had previously been the organist behind Screaming Lord Sutch, and Knights was a knockaround bassist seeking steady work.


The demo this group recorded met with immediate favorable reaction with the publisher; and the combo was instructed to re-record one of the tunes as a single to be released on Regal Zonophone Records [sic: should be Deram]. The fellows, who at that point decided on calling themselves Procol Harum (after a Burmese bluecat owned by a friend of Reid's) professionally recorded the song selected: called Whiter Shade of Pale. 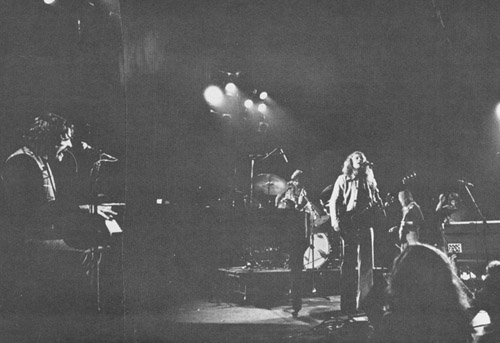 Brooker, after acquiring a rough mix of the song, approached a pirate radio station off the coast of England and asked that they please play the record so the band could hear themselves over the radio. The pirates agreed to air the tune at a specific time in the day, and when they did, Brooker was there to capture the moment on a home tape recorder. Brooker still owns the tape of the first time Whiter Shade of Pale ever crackled over the airwaves.


Upon its official release, May 12, 1967, the song shot to the top of charts around the world, where it lingered for several weeks. The tune, whose organ line was based upon a passage from Bach, was an unanticipated success. Brooker and Reid decided that Procol Harum was a viable entity. The first permanent configuration of the band was Brooker, Reid, Fisher, Knights, lead-guitarist Robin Trower and drummer BJ Wilson. This group managed to record their first album Procol Harum in eleven days.

Starting with Procol Harum, album releases became an annual affair for the group. The next couple of years brought with them a pair of masterpieces, Shine On Brightly and Salty Dog, the bands [sic] second and third albums. These LPs were brimming with such classics and eventual standards as In Held 'Twas In I, Shine On Brightly, Pilgrim's Progress, Salty Dog and others.

In early 1969, during an American tour the group made a guest appearance with a symphony orchestra for performances of Salty Dog and In Held 'Twas In I at the prestigious Stratford Shakespeare Festival in Ontario. Following this success Procol Harum met head on with their first personnel problems.

David Knights and Matthew Fisher were released from the band for reasons attributed to lack of enthusiasm, and were replaced in one fell swoop by the multi-talented bassist-cum organist Chris Copping. Copping, who had been pursuing a PhD in chemistry before junking the degree to join Procol, was yet another member of the same garage band that had spawned Brooker and Trower.

The next album, Home, proved to all that the proficient musicianship lost in Fisher and Knights was more than replaced by Copping. Quite a few critics were overwhelmed with the power displayed on the LP, and songs like Whisky Train and Whaling Stories quickly took their place among the other standards that audiences loudly pleaded for during live performances.

Broken Barricades came next and revelaed [sic] a sleek, overtly sexual collection of songs. Procol Harum had flexed their muscles and flaunted their prowess, and come up with a rockin' album.

After Broken Barricades, it sadly became apparent that the band's growth and evolvement [sic] had not been matched by an increasing audience. Procol, whose album sales had leveled off at about 150,000 copies sold per album, deserved desperately to be exposed to the mass audience. 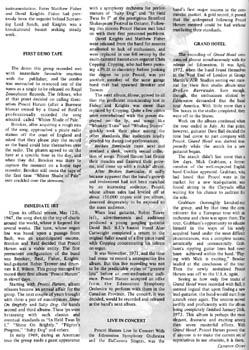 It was November, 1971, and the time had come to record a retrospective live album. But this live recording was not to be the predictable replay of 'greatest hits' before an over-enthusiastic audience. Procol Harum accepted an offer from the Edmonton Symphony Orchestra to perform with them in the Canadian Province. The concert, it was decided, would be recorded and released as the band's next album.


Procol Harum Live In Concert With the Edmonton Symphony Orchestra and the DaCamera Singers was the band's first major success in the commercial market. A gold record, it proved that the widespread following Procol Harum merited could be had without mutilating their standards.


The recording of Grand Hotel commenced almost simultaneously with the release of Edmonton. It was April, 1972, when the band found themselves in the West End of London at George Martin's AIR Studios sorting out material for their first studio album since Broken Barricades. Sure enough, though, the enthusiasm elicited in Edmonton demanded that the band tour America. With little more than a few hours in the studio completed, they were off to the States.

Work on the album continued when the tour ended in July. At that point, however, guitarist Dave Ball decided the time had come to part company with Procol Grand Hotel was shelved temporarily while the search for a new guitarist began.

The search didn't last more than a few days. Mick Grabham, a former member of the well-respected English band Cochise appeared. Grabham, who had heard that Procol were in the market for a new lead-guitarist, was found sitting in the Chrysalis office waiting for his chance to audition for the role.

Grabham thoroughly knocked out the group, and by that time the commitment for a European tour with an orchestra and choir was upon them. The tour, Grabham's opportunity to educate himself in the ways of his newly acquired band under the most difficult circumstances, was a complete success; artistically and commercially. Grabham's rippling guitar lines had never been achieved within the band. 'Playing with Mick is exciting,' Brooker lauded at the conclusion of the tour. Then the newly revitalized Procol Harum was off to the USA again.

Seeing as how only five [sic] tracks of Grand Hotel were recorded with Ball, it seemed logical that upon finding a new lead-guitarist, the band would start from scratch once again. The sessions moved swiftly and proficiently with the album being completely finished January 26, 1973. This album is perhaps the most elegant, dramatic and exciting among their seven masterful efforts. With Grand Hotel, Procol Harum proves that if anyone is to make the current set of superlatives in use obsolete, it is them.