Alan Semok writes: When Procol played the Hollywood Bowl in September 1973 it was, as we all know, recorded for broadcast several months later on the syndicated King Biscuit radio program. The recordings of the broadcast (which was mixed and encoded for quadrophonic sound, but which featured only highlights of the concert) capture a fine performance by the band with orchestra. There are many that feel it even rivals the Edmonton album. In October of 1973, Rolling Stone printed a review of the show, which details some technical problems at the show not evident (thankfully) in the recording; I recently found my copy of this review ...

... to which BtP has added two photographs, taken by Roberta Holyoak of Sherman Oaks, CA, and kindly sent to 'Beyond the Pale' by

Lousy sound systems and poor concerts are not a rarity these days, even for big name attractions like Neil Young or America, but when the show is good and the audio is bad – that's when it hurts. And it was painful at the Bowl for Procol Harum.

The first thing one noticed visually if not aurally was the massive bank of speakers at stage left and the absence of its twin at stage right. So, it seemed, people in the box section (first third of the Bowl) got only part of the story since Gary Brooker's vocals and much of the impact of the Los Angeles Philharmonic and the Roger Wagner Chorale were lost in the mud and imbalance. Customers in the upper reaches of the bowl, those in the rafters, apparently did better, according to several persons who took the hike, willing to sacrifice view for vocals.

Opening with Broken Barricades, Procol was in fine shape – tight and emphatic throughout the evening. Guitarist Mick Grabham, once of Cochise, managed a number of well-executed and well-placed solos that were high points of the night. They were one of the few sounds that stood out through the haze. Brooker was in rare form, his distinctive voice hitting every note on a stirring rendition of A Salty Dog, the show's best number.

Keith Reid made a rare onstage appearance to recite during In Held 'Twas In I, drawing a burst of applause from the audience which was aware enough to know who he was on sight.

Procol did Simple Sister plus much of the material on their Live In Concert With The Edmonton Symphony Orchestra and Grand Hotel albums, including Conquistador, Toujours L'Amour, Bringing Home The Bacon, Grand Hotel, Souvenir Of London.

The last two were the encore, which seemed to be the only bad decision of the night. TV Ceasar just doesn't stand up to Whiter Shade Of Pale, and the audience waited patiently for that one never to receive it. The show ended with a rousing Britannia, tacked on the back of TV Ceasar, and it once again brought the crowd to its feet.

In fact, standing ovations were one of two things that occurred with some regularity that evening: the other was feedback. It emitted corresponding bursts every five minutes or so to the chagrin of all attending. Thankfully, Procol Harum transcended the problems. 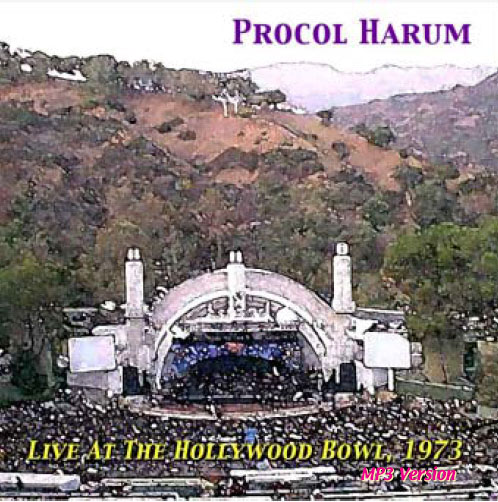 Judging from the audience applause (regular standing ovations, according to one report), no one would know that this concert was plagued by sound problems. As David Rensin wrote in Rolling Stone: "People in the box section (first third of the Bowl) got only part of the story since Gary Brooker's vocals and much of the impact of the Los Angeles Philharmonic and the Roger Wagner Chorale were lost in the mud and imbalance. Customers in the upper reaches of the bowl, those in the rafters, apparently did better, according to several persons who took the hike, willing to sacrifice view for vocals."

Fortunately, this soundboard recording, which was broadcast on the King Biscuit Flower Hour, does not betray any sound problems. In fact, it is quite an excellent recording, highlighting Brooker's vocals and even showcasing the Los Angeles Philharmonic on Conquistador and the closing tracks. As those who were present at the concert or anyone who had heard the broadcast, the major letdown is that the group did not perform their signature hit, A Whiter Shade of Pale. Other than that, Procol Harum, who were touring behind the just-released Grand Hotel album, could easily have given Queen (on a good night) a run for their money.