Here's the seventh question in this year's excellent Christmas Conundrums

Here is the seventh clue of the day. It's not necessarily the right clue for today's question, but it will be useful eventually.

Here's the sixth question in this year's excellent Christmas Conundrums

Here is the sixth clue of the day. It's not necessarily the right clue for today's question, but it will be useful eventually.

And maybe it would be worth your while to check the How to Play page again. Though the procedure remains unchanged, a couple of sentences (about brackets) have been added by way of reassurance to competitors who wrote in with questions.

Here's the fifth question in this year's excellent Christmas Conundrums

Here is the fifth clue of the day. It's not necessarily the right clue for today's question, but it will be useful eventually

Here's the fourth question in this year's excellent Christmas Conundrums

Here is the fourth clue of the day. It's not necessarily the right clue for today's question, but it will be useful eventually.

Here's the third question in this year's excellent Christmas Conundrums

Here is the third clue of the day. It's not necessarily the right clue for today's question, but it will be useful eventually.

Here's the second question in this year's excellent Christmas Conundrums

Here is today's clue of the day. It's not necessarily the right clue for today's question, but it will be useful eventually.

Here's the first question in this year's excellent Christmas Conundrums

We're adding a fresh clue daily. It's not necessarily the right clue for today's question, but it will be useful eventually.

'Tusind tak' to DR2 in Denmark for ushering Christmas in with that magnificent excerpt from the forthcoming Procol Ledreborg orchestral DVD. And bravo Procol Harum!
Missing tracks (to fit in the sixty-minute slot) were Butterfly Boys, The VIP Room, Simple Sister, An Old English Dream and Whaling Stories.
Credits at the end included Keith Reid (texts) and Chris Cooke (project leader).
Now ... we await the DVD ... which you can win in the Christmas Conundrums, starting tonight

December 24: We wish you all a Merry Christmas! 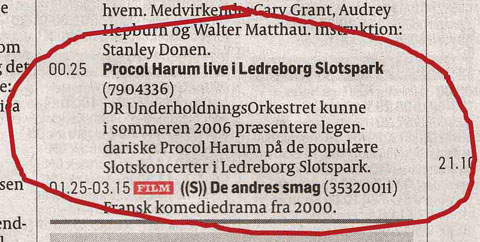 Get ready to watch Procol Harum at Ledreborg Castle on Danish TV: the one-hour edit of the show from 20 August 2006 will be broadcast at 00.25 European Time, early on the morning of Christmas Day, 25 December.
It can be viewed on web TV following this link (thanks Mogens). Alternatively use this DR2 link and double-click on the little screen at the top right of the page: the picture will expand to fill your screen  (thanks Chris, Pat, Tim, Henrik).

Unfortunately it seems the first of these functions for Danish IPs only, but it might be worth giving it a try if the second fails you. If you live in Norway and receive TV signals from Canal Digital, you could follow webmaster Jens and purchase a one-month subscription to Danish TV. This may be possible for subscribers of other satellite companies and in other countries as well. The rest of us will have to wait for the upcoming DVD from the Ledreborg concert, available in 2009. This DVD (which features the full concert) is also one of the prizes (twice) in our annual Christmas puzzles..

Added a page that explains how to play the coming season of twelve Christmas Puzzles, by solving which you stand to win some pretty good prizes

Sadly no No Stiletto Shoes at Chiddingfold Club ... the latter no longer exists: take yourself back there with 1989 YouTube clips here and here

And who needs a winged horse, when you can run this short film?

Updated the list of the excellent prizes you can win in this year's Christmas Puzzles at 'Beyond the Pale' (thanks, everyone)

Also added a page that explains how to play ... it gets easier every year ...

Enjoy a preview of this absorbing Bach film by Procol Harum fan Will Fraser of Fugue State Films (thanks, Will)

Added news of Procol Harum's 2009 plans for record-releases (thanks, Chris)

Coming soon: the annual BtP puzzles, in which the above DVD will be one of the glittering prizes.

Added the setlist for one of the 1972 Chicago shows that has been causing interest the last few days (thanks, Peter)

Good to be getting lots of responses from our many readers (thanks, everyone)

When doing your online Christmas shopping for books, music, electronics and so on, please use the Amazon links in the box above.
It costs you nothing extra, but each transaction contributes a few cents towards keeping this website online.

Added brief follow-up information about the Chicago gigs in 1970, 1971 and 1972 that we recently added to the tour schedules (thanks, George)

Maybe somebody out there can help with a precise date for Procol Harum's Mansfield State College appearance in the winter of 1972? (thanks, Arley)

Attention all Danish Procol Harum fans ... can you assist with a date / origin for the AWSoP picture-sleeve that we have listed as 1967, but which clearly isn't (thanks, Tormod, for pointing this out)

Visit this website to find out all the wrong words to Gary Brooker songs (thanks, Scobie)

Also added a striking Robin Trower portrait from the year 1974  (thanks, Jim)

' ... many can remember where they stood when they first heard its momentous mix of classicism and surrealism ...'

Added an article in which Crimson and Brooker lyricist Pete Sinfield asserts that 'Whiter Shade of Pale was very important from a lyrical point of view' (thanks, Dave)

Continuing our theme of Procol gigs and dates from 35+ years ago, added a probable setlist from Syracuse USA (thanks, Marvin)

Added the sleeve for a Procol 45 rpm 'Golden Greats' re-release (thanks, Lars) – anybody able to tell us the date of it?

It's probably a while since you've read this page, which BtP posted following a long Procol lay-off. Quite a lot of it came true. And now there's been another long lay-off ...

Added a vampire reference to the BtP page about the words 'whiter shade of pale' deployed in a non-Procol context (thanks, Joan)

Here's the link to an interesting recent web-chat with best-selling genealogical author Peter Christian, who is well-known to fellow Procol concert-goers.

Many thanks to various correspondents who have supplied further Procol dates for the annals.

Maybe somebody out there can help with a precise date for Procol Harum's Ravinia Festival appearance in 1970?

Added the sleeve for an excellent-value 1978 Procol Harum 7" disc (thanks, Lars)

Thanks for the good response to our questions about the possible further nine 1972 Procol Harum gig dates at the foot of this page: please let us know if you can confirm any more of those conjectural Procol November dates.

Added a good note about a Procol show in Boston in 1972 on Firework Night (thanks, Art)

Thanks to some thoughtful sleuthing by a correspondent, we now have a possible further nine 1972 Procol Harum gig dates (thanks, Marvin). If you were in America in 1972, please look at the list at the foot of this page and let us know if you can confirm any of those conjectural Procol November dates.

Added some interesting 2006 photographs (thanks, Jeremy)

Added a Dutch review (and a version of it in English) about the CD from The Keith Reid Project, The Common Thread (thanks, Frans)

' ... it manages to capture the very essence of understated Procoldom ...'

A Procol Harum musician visits a Netherlands shrine to the band ... pictures, stories. (thanks, Dave; thanks, Frans)

Added a question to the bottom of this page (look for the strange-coloured background in the gig-list): please write in with suggestions. For instance, is it in fact this gig ? (thanks, Tom)

Added a good setlist from very early in 1976 ... and, therefore, amended the speculative notes about the origins of the Five and Dime setlist (thanks, Richard)

Procol manager Chris Cooke recorded a brief piece at the BBC yesterday Radio 4's iPM today: listen out for his idea about improving ATM access for the visually impaired: read his comments here

Added two shots of a 1982 picture-sleeve here (thanks, Lars)

'All things considered, conquistador, you are advised never to leave your stallion in need of company ...'

Added a link to this Conquistador response, posted at Hooting Yard by the UK's foremost nonsense blogger, coincidentally following his fine gig in Bristol this week, organised by half of the BtP team (thanks, Frank)

Remind yourself of a related item, showing here

Added a self-referential item to this populous page (thanks, Kim) ... search for 'perfect shade of blue'

Added the text of another Keith Reid collaboration (thanks, Kim)

' ... he was controlled by the corporation to such an extent that he was given 'scripts' telling him how to approach interviewees ...'

It's never pleasant to hear of someone losing their job. Terry Christian, whose remarkable interview with Gary Brooker is commemorated here, has apparently not succeeded in retaining his. (thanks, John)

'And so it was, a little later ... ' Is there a Procol quotation embedded in this Lupine Item? (It also includes the word 'cartwheels') (thanks, Wilfried)

The Procol Harum December calendar is ready (thanks Sergey, and best wishes)

Updated this index of all past pages at 'Beyond the Pale'

The new Procol Harum album, One Eye to the Future, is now available from iTunes, in case there are people who would rather buy their music from that source than from here