From the 'Something Magic' tour programme

The text of this 1977 programme is dated January 1976: it is a cut-down, now somewhat out-of-date, version of that featured in the Procol's Ninth programme: see here. 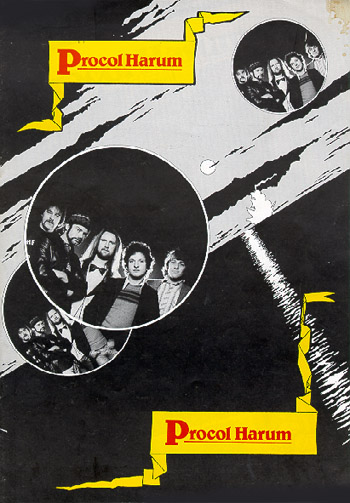 A great deal of rock music produced since 1965 has dated very quickly. Nostalgia seems to be chasing itself in ever decreasing circles. How long will it be until you run into a kid wearing a Beatle jacket and cuban [sic]-heeled boots? Procol Harum have survied [sic] all this. They have sidestepped passing fashion despite every attempt to lumber them with the responsibility for "The Summer of '67". It seems ridiculous that the band who did not know which coast of America San Francisco was on were almost strung up in a kaftan for all time by the excesses of the era. They escaped and toured extensively abroad, thereby gaining credibility, and returned determined to rely on the music to project their image rather than manufacture a public face.

In an environment that imposes severe restrictions on its participants Procol have enjoyed a remarkable career. Not content to suffer the rock world's traditional short life span they have consistently delivered the goods. The music has stood the test of time because it is distinctive and has style and character.

Their live performances draw on every album the band have recorded. Not content to rely on their obvious successes the band prefer to work on refining and developing live appearances drawing from their diverse repertoire. It is an attitude that prevails over everything Procol Harum do.

Procol Harum was conceived as a band out of the Brokker [sic]-Reid songwriting partnership. The project's first notable success was A Whiter Shade of Pale. The record sold eight million copies world wide, leaving an inexperienced and bemused Brooker and Reid the unenviable task of writing the follow-up. Homburg appeared and only sold a million copies. The band by now comprised Barrie Wilson (drums), Matthew Fisher (organ), David Knights (bass), Robin Trower (guitar) and Garry [sic] Brooker singing and playing piano. The first album, Procol Harum, released mid '67 [sic], was recorded in a very short time. So brief was Procol's flirtation with their first label that the second single was in fact on a different label. For many people it is still their favourite album. 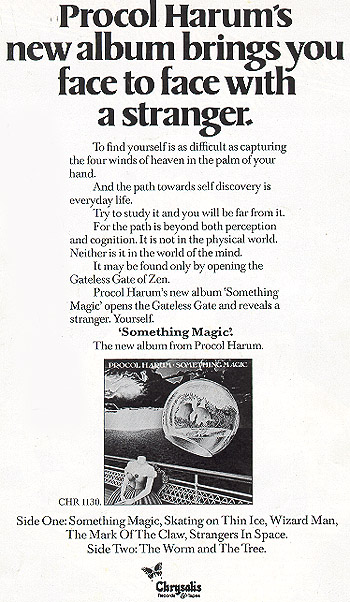 The whole publicity number about who played what where was irrelevant and very much beside the point. To set the record absolutely straight, the augmented Paramounts became Procol Harum to fulfil the potential of the Brooker-Reid songwriting team.

It was at the West Coast of America that Procol were first recognised beyond their hit records as a musical force. Shine on Brightly appeared in October 1968, some months before it was released in England, due largely to the strange machinations of the record industry at the time. Observers claim the album had the impact on Los Angeles that Sargeant [sic] Pepper had on London. American musicians and a whole generation of new English bands drew inspiration from a style Procol established. Moody Blues, Spooky Tooth, Yes, Genesis and the Elton John-Bernie Taupin partnership can be traced back to Procol. They became something of a cult and in the States. Keith Reid even received letters from American University students wanting to do theses on his lyrics.

Come early 1969 Procol returned to England from America intent on making a record that would re-establish them on a world-wide basis. They spent a solid month rehearsing in the Rolling Stones' rehearsal rooms and gave Matthew Fisher the chance to realize his production ambitions. Procol booked into Abbey Road studios and emerged some months later with Salty Dog - the title track becoming a classic Procol song.

At his point it was becoming obvious that a committed Procol core had emerged in Gary, Barry [sic] and Keith whereas Matthew and Robin were looking forward to other projects of their own at some future date.

The committed decided that Procol would exist for some time to come and plans were laid accordingly. Brooker's distinctive voice and melodies, together with his blues-influenced singing, and Wilson's unique style of drumming had given a strong identity and a sound people attributed readily to Procol Harum.

Salty Dog dented the English public once again; chart appearances were made. The sleeve, a dry spoof on the old Players cigarette packet design, admirably encapsulated the spirit of the band. It was a source of constant amazement to this writer at least that no-one had publicly unearthed Procols [sic]wry humour.

Matthew was finding touring arduous and Salty Dog gave substance to his producer's ambitions. David Knights also moved off at this time. Chris Copping, The Paramounts' original bass-player and an accomplished keyboardist, filled both vacated slots. Copping had departed for Leicester University before Procol emerged, to study snooker and serious drinking. He received the recall midway through his post-graduate thesis on 'The Relative Specific Gravity of British Beers' (Chris was a chemist). Home, the fourth album, was recorded with this more economical line-up in 1970 and proved to be the way forward. It was a proper group album (The Paramounts plus Reid on words) with minimal overdubs and total reliance on the musicians [sic] abilities to convey the material. It is their most underrated set and produced Whaling Stories which re-appeared again on Edmonton later in the story.

Regal Zonophone, the groups [sic] eccentric British recording organisation, keeled over backwards at this stage leaving Procol Harum no alternative but to seek alternative accommodation. Chrysalis, having the longest beards, were duly selected as the record-company of the future.

Broken Barricades hit the streets in August 1971. It was the first studio-recorded album for the new label and contains some of their most popular live numbers. Power Failure is the first full recorded display of BJ's remarkable drumming ability and Simple Sister is a favourite finale number in concert. The title track was picked as 'song of the year' by one British DJ. It was on this album that Robin Trower's musical aspirations became more clearly apparent and it is from here that his very successful solo career started.

Shortly after Barricades' release Mr Copping was relieved on bass by Alan Cartwright (before the accidental live album). Procol were again restored to a full compliment [sic] of musicians. Chris gained enough breathing-space to become the world's worst banjo-player and the live potential of the band moved forward again.

Cartwright played in the ill-fated Brian Davison / Graham Bell Every Which Way that produced one excellent Marquee Festival appearance, a good album and then, regrettably, sank without trace. Alan had known Garry [sic] for some time and was an obvious candidate. His first recorded appearance is on Edmonton which is the accidental live album recorded in Canada during November 1971. Despite lack of rehearsal opportunities the resultant recording, Live in Concert with the Edmonton Symphony Orchestra exceeded all expectations. Not only was it excellent album material, it produced a hit single in Conquistador in the late summer of 1972. Most rock bands had approached orchestral projects with the equivalent sensitivity Manchester United supporters reserved for Euston Station. Procol always retained a talent for absorbing influences and ideas to produce original music.

The unexpected commercial success of Edmonton delayed the next project a few months providing time to work in the newest member. Lead guitarist Mick Grabham, now a veteran of over three years, replaced Dave Ball, himself an interim replacement for Robin Trower. Mick's previous band Cochise remained a media favourite without ever paying the rent or fulfilling their strong potential. Mick débuts on Grand Hotel, released later than anticipated and recorded by the line-up that has remained stable up to the present day [sic!].

After the release of Grand Hotel the band decided to concentrate on developing as a live band with particular respect to England, their most neglected area. By the time Exotic Birds and Fruit was released in April 1974 the band's live appearances were paying off, particularly in Europe.

From Grand Hotel onwards Procol built up a following all over Europe and Scandinavia. They worked out that everyone who owned a gramophone in Portugal bought a copy of Grand Hotel. Songs from these two albums, As Strong as Sampson [sic], Bringing Home the Bacon, Grand Hotel, The Idol, Nothing But the Truth soon became stage favourites.

Procol's Ninth, released in August 1975, proved to be a new departure for the band. Leiber and Stoller came in to produce and two non-Procol songs were included for the first time: Eight Days a Week, the Lennon-McCartney classic, and trick-question portion of their encore; and a song written by the illustrious producers, I Keep Forgetting. Pandoras [sic] Box re-established Procol Harum in the British singles charts.

Shortly after the recording of Ninth Procol Harum became the first European band to play in Mexico City at the President's request. Around the same time an album was recorded in Europe to celebrate the 150th anniversary of the birth of Strauss: Procol were asked to contribute The Blue Danube to the project.

Procol's knack of doing concerts in Transylvania when they are needed in London and a penchant for visiting unusual places had earned them their slightly unjustified invisible band reputation. It is more correct to say that Procol Harum are more concerned with their long-term existence than making flash headlines in the short term. Their music has matured rather than aged, which is really the ultimate compliment to any music.

Adverts in the programme include