Like all the new PH re-releases on Repertoire, this CD comes in a handsome 'digipak' with freshly-written liner notes by Chris Welch, in a liberally illustrated booklet including several hitherto-unknown shots of the band. Not all of them have bonus tracks, but fans will be interested in the quality of the digitally-remastered sound.

"Soundwise my first impression was very positive," wrote audiophile Hermann Braunschmidt to BtP. "Very clear, strong, powerful and loud ... I compared the CDs to the old Castle re-releases, and my impression proved to be right that the material was highly compressed (more than 6 dbs) which makes the CDs sound far from a typical mid-seventies production. So definitely not a bad job, and you can expect to hear maximum subjective improvement under listening conditions such as in the car, or on a portable system in the office etc."

Procol Harum's illustrious career was drawing to a close, when the band unleashed their tenth and final album of the Seventies. Although still selling out concert halls throughout Europe after a decade of achievement, it seemed their sophisticated style of music was falling out of favour. In future, the concept of romantic themes and grandiose ideas would be superseded by the simplistic energy of punk, disco and heavy metal.

When Something Magic was released in March, 1977, the Sex Pistols were at the peak of their notoriety. Instead of the sophisticated sound of Procol's A Whiter Shade Of Pale dominating the airwaves, the pop world was besieged with the uproar of Anarchy In The UK. This clearly made life difficult for a band formed in the Sixties and their latest offering tended to get overlooked amidst the hubbub of punk rock. This was a pity, as the album contains many fine moments and pleasant melodies.

Certainly the band embarked on the project intent on trying out fresh ideas. The recording sessions held at Criteria Studios in Miami, Florida during 1976, witnessed a number of changes. For starters they had Peter Solley on keyboards and synthesizer, a new recruit to the band. They also took on board the studio's in-house producers Ron and Howie Albert.

Recalls Gary Brooker: "When it came to doing this album there was a feeling it was time for a change. Alan Cartwright our bass player had left and so Chris Copping stopped playing organ and went back onto bass guitar. He hadn't played bass with the band since our 1970 album Home [sic]. Chris had been the bass player with our first group The Paramounts, in the early Sixties. He was able to play both organ and bass - as badly as each other! So we got Pete Solley on organ who had previously been with Chris Farlowe and Terry Reid. I had great respect for Pete, who was a fine player. He introduced a slightly different sound to the band because he didn't use a Hammond organ. He played a Yamaha synth, although he could make it sound like a Hammond when necessary."

was the first album Procol Harum had made in America, having spent many years recording at London's Air Studios. "We were always looking for ways to make something different. We wanted a different angle, so we thought we'd go to Criteria, which was a happening studio. The Bee Gees were making an album there and it's where The Eagles made Hotel California."

The Procol project proved somewhat contentious to the feisty dudes who ran the studio. More used to down-home guitar rock, Procol Harum's floaty concepts presented the young American producers with a problem. In its final form Something Magic had only six tracks but they included The Worm & The Tree a lengthy saga by Procol's lyricist Keith Reid. This allegorical tale about life, death and regeneration eventually took up the whole of the second side of the album.

Explains Brooker: "We actually went to Criteria with sixteen songs. The record was to be a co-production between ourselves and the studio's engineers, Ron and Howie Albert. We didn't get off to a good start. We had a few experimental songs they didn't particularly like. But that was the way we did things. They actually said: 'What do you want us to do with them?' And we said 'We want you to produce them!' In the end we had a few discussions and Keith came up with a fairy tale he'd written a year earlier. Because it was so long, I'd never really done anything with the piece. But I had a few ideas that were all in my mind. I explained to the producers there was one long theme about a tree and another theme that represented the worm. The worm eats the tree and it dies. It was all rather allegorical because it was actually about the people who had screwed up Procol Harum! The worm eating the tree was really about the band being undermined. So the producers said: 'Okay, let's do that then!' They picked about five or six numbers from our choice of 16 and made the album."

The title track has a very strident and dramatic introduction courtesy of a session outfit called the Miami Orchestra. Skating On Thin Ice is a lilting waltz arranged by Chris Copping. The Mark Of The Claw, written by Mick Grabham and Keith Reid, is described by Gary as: 'A horror story. It's got some good old haunted house sounds on that one." 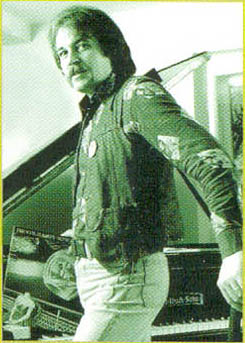 Pete Solley is featured on synth on Strangers In Space, which has an attractively melodic chorus. Gary: "It's a Procol blues really! The Wizard Man [sic] was a bonus track on the original vinyl album, but it wasn't mentioned on the track listing because they had already done the artwork. Backgammon was the B side of the single. This is an instrumental done in the manner of Booker T and the MGs. These tracks were all done in Miami at the same session. If you listen to Wizard Man you can tell that The Eagles were in the studio next door. Their influence filters through."

Gary has fond memories of the young American band, then enjoying great success. "They were completely crazy! The Eagles used to support Procol Harum on tour when they first started. We had a Top Five album and they'd just released their first single Take It Easy. But by 1976 they were completely out of it and you could hardly talk to them. I don't know how they made such a good album!"

Procol's major work The Worm And The Tree is sectioned into three parts. However, it was performed as one continuous piece. Says Gary: "It was only divided up for publishing reasons. We started playing the producers the music, so they'd get the idea, but it was such a half baked idea, I hadn't actually conceived how I was going to sing it. In the end it didn't get sung at all. It was done as spoken word. We were going to get James Mason to read it, but for some reason it ended up with me reciting the words of Keith's fairy tale. All the characters and happenings are reflected in the music. It was an interesting concept. I won't say that it all worked, but I'm not ashamed of the final piece."

Procol Harum's second album Shine On Brightly (1968) also featured a long musical suite and it was a sense of déjà vu when they revived the idea.

Gary: "By the time we had finished this album and had taken it out on the road we thought: 'Listen lads - we've gone full circle here.' We did the album at the end of 1976 and it came out in 1977, by which time the punks had arrived and disco was happening. And here comes Procol Harum with an 18-minute spoken word fairy tale! It was as far away from the mainstream of pop as you could get. It was the age of Johnny Rotten and Saturday Night Fever. Ironically our old producer Chris Thomas was working with the Sex Pistols. This proved to be our least successful album, partly because half of it was taken up with a recitation. It would be marvelous for primary school drama classes. I think that's where its strength lies. We all agreed we were in need of some sort of rest. So we disbanded three months after the album came out." 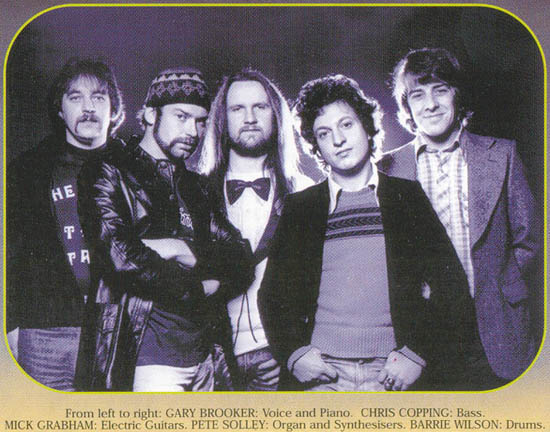 Procol Harum played their farewell British and American shows during the Spring of 1977. Chris Copping quit at the end of the UK dates, to be replaced by Elton John's bassist, the late Dee Murray. The tour finished up in New York.

Says Gary: "New York was always a great town for us. By coincidence the last gig was on 12 May 1977, ten years to the day since A Whiter Shade of Pale had come out."

Looking back on Procol's final days, Gary admits it was bad timing to release a piece like The Worm & The Tree. "We had become trapped into a cycle of making an album every year and it was hard to get out of that. We were victims of our own art. What did I do next? Nothing. Absolutely nothing. It was the first time I'd done nothing for ten years! It was wonderful. Suddenly I found I had a home and raised chickens, happily doing all the things I'd never had time to do before."

However, Brooker felt sad at the demise of the band and recommends that listeners to this CD should note the last few moments.

At the conclusion of The Worm & The Tree Gary intones:

'The worm can be killed yet the tree be not dead. For from the roots of the elder a new life will spread.'

There is a pregnant pause before Gary plays a few wistful piano notes, his subtle requiem for the lost dreams of Procol Harum.

Gary Brooker did not remain 'doing nothing' for long. He made three solo albums including No More Fear Of Flying (1979) produced by George Martin. He joined Eric Clapton's band and also toured with Ringo Starr's All Starr Band. In 1991 Keith Reid and Gary Brooker were reunited as a songwriting team to make a 'come back' Procol Harum album The Prodigal Stranger. This was followed by several American and European tours when the band played all their greatest hits to ecstatic crowds. It was good to have them back.