Frans Steensma writes to BtP: 'a very interesting item at BtP today: it really shows a rock musician's life is not only sex, drugs and rock & roll. It prompted me to do another feature …'

It can't be coincidence. Procol's biggest triumph in the seventies happened in Edmonton (a city of 500,000 in Northern Alberta, Canada). As all Procoholics know Edmonton (a suburb in the northern part of London) played a large role in Procol's history. Here's why:

This was one of the first artistically successful unions of rock and classical music, but it was not the first such collaboration for the Edmonton Symphony Orchestra. A full year earlier, the ESO had presented a pair of concerts with the Canadian rock band Lighthouse. These concerts were so successful that the Board was amenable to doing more of that type of 'Pop' concert. It was sometime early in 1971 a guy called Holger Pedersen suggested to Bob Hunka (Assistant General Manager ESO) that Procol Harum was a natural for an orchestral collaboration. Next to that rock columnist Ritchie Yorke (dean of Canadian rock critics, big Procol fan and writer of a Led Zeppelin biography) had heard about ESO's history of collaborating with pop groups and he had approached Hunka at a rock competition in April 1971 (see here also). Although Hunka didn't immediately act on the suggestion, on 7 August 1971 Procol Harum, on a cross-Canada tour, made a stop in Edmonton. A meeting was arranged between Hunka, Derek Sutton (Procol's road manager) and Gary Brooker at the Edmonton Inn. In only one meeting the idea for the live concert took shape. A date was set for 18 November of that same year.

Procol's twelfth US and Canada tour started in Atlanta, Georgia on 5 November. After that they played, among others, Toronto, Detroit and Los Angeles. Hunka remembers: "The ink was still wet when they landed here in Edmonton. In fact, Gary's wife copied music during the entire flight!" For what happened between 16 November and the concert see Gary's pre-concert notes at BtP.

To break even financially on the concert, Procol had to sell 150,000 albums (Mark Plummer in Melody Maker (27 November 1971) stated 120,000). Ticket sales (3,000) covered the group's transportation fees and the $2,000 hotel bill run up during the stay at Edmonton's Holiday Inn, but in order to pay the staggering rates demanded by Heider's recording unit, and the ESO, yet still to come up with a profit, Procol had to sell more copies of this LP than of any record they had ever put out before. With this in mind, the concert opened on a nervous note.

Before the actual concert started, Chris Copping alone (+ orchestra) played Albinoni's Adagio (it was recorded four years later by Procol at the request of Chrysalis France (see here)). During the concert Shine On Brightly, Luskus Delph, Simple Sister and Repent Walpurgis were also played but didn't make the album. Luskus Delph appeared later on the b-side of the UK Conquistador single. After the concert Procol re-performed three songs of which Conquistador and Whaling Stories were two. These redone versions ended up on the album. [BtP understands that In Held was reprised also, at least in part]

Ritchie Yorke asked GB in May 1972 [from a Canadian music magazine, Rainbow, 26 June 1972]:
"You're fairly satisfied then with the new album now it's all mixed and you can listen to the completed thing. Are you very happy with the way it all turned out? I remember the night right after the concert you really didn't know at that point, you sort of figured until you heard all the tapes and everything you really didn't know."

GB answered: "Yes, it was hard to know how the recording had turned out, I enjoyed the concert that night. We all really enjoyed that. But, well you know, I think everyone will like the actual sound of the album. Of course, there's always a few problems you know; in a couple of places it's not as tight as it should have been. But then how can you get really tight with about a hundred people on the stage?"

The official title of the album is: PROCOL HARUM LIVE IN CONCERT WITH THE EDMONTON SYMPHONY ORCHESTRA but this proved to be a very long and a very difficult name. The following bloopers occurred: 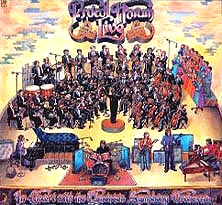 The chairs the choir sat on disappeared in the drawing, but everything else is there.

Which is more than can be said for the poster a German artist made in 1991 for Gary Brooker's German 'Rock Meets Classic' tour. He re-did the complete cover, but had two problems. Firstly he didn't have the original photo (only the drawing) and secondly the proportion of the poster (breadth, height) differed from the album sleeve. So he just cut off the two violin players on the left and relocated the complete - now they're 30(!) singers - choir (suddenly it stands behind the orchestra). In addition, hardly any person is still to be recognised. Still a great poster, if only for BJ suddenly being an attractive blonde!