B J Wilson, Player of the Month

'NS' in Beat Instrumental c.1970: anyone know the exact date? 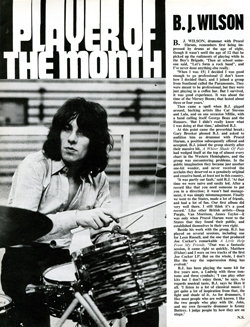 BJ Wilson, drummer with Procol Harum, remembers first being impressed by drums at the age of eight, though it wasn’t until the age of  twelve that he picked up the rudiments of playing while in the Boys' Brigade.  ‘Then at school someone said, “Let’s form a rock band”, and I’ve never done anything else really.

‘When I was 15½  I decided I was good enough to go professional (I don’t know how I decided that), and I joined a group from Southend called the Paramounts.  They were meant to be professional, but they were just playing in a coffee bar.  But I survived, it was a good experience.  It was about the time of the Mersey Boom; that lasted about three or four years.’ 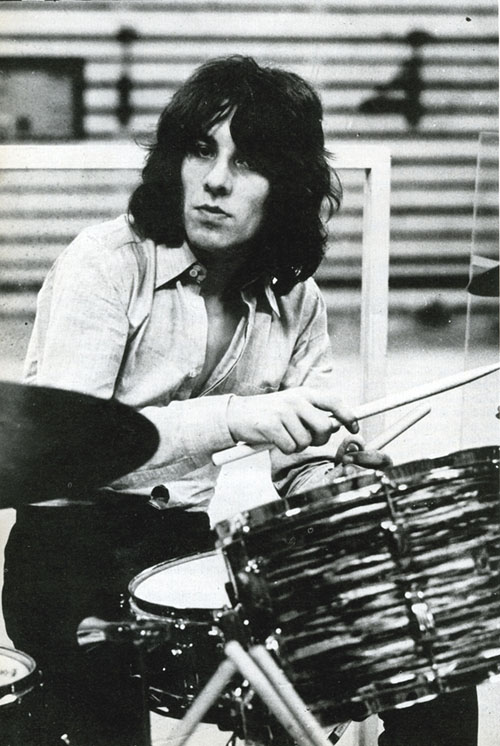 Then came a spell when BJ gigged around, backing artists like Cat Stevens and Lulu, and on one occasion Millie, with a band calling itself George Bean and the Runners.  ‘But I didn’t really know what I was doing at that time,’ admitted BJ.

At this point came the proverbial break; Gary Brooker phoned BJ and asked to audition him as drummer with Procol Harum, a position subsequently offered and accepted.  BJ joined the group shortly after their massive hit, A Whiter Shade of Pale had wedged itself at the top of almost every chart in the Western Hemisphere, and the group was encountering problems.  In the public imagination they became just another one-hit wonder, and never received the acclaim they deserved as a genuinely original and creative band, at least not in this country.

‘It was partly our fault,’ said BJ.  ‘At that time we were naïve and easily led.  After a record like that you need someone to put you in a direction; it wasn’t bad management, it was simply mismanagement.  Finally we went to the States, made a lot of friends, and had a lot of fun.  Our first album did very well there.  I still think it’s a good record.’  Like other British artists – Deep Purple, Van Morrison, James Taylor – it was only when Procol Harum went to the States that they found their public, and established themselves in their own right.

Beside his work with the group, BJ has played on several sessions, including one for Leon Russell, and the one that produced Joe Cocker’s remarkable A Little Help From My Friends.  ‘That was a fantastic session, it came right so quickly.  Matthew (Fisher) and I were on two tracks of the first Joe Cocker LP.  But on the whole, I don’t like the way the supersession thing has evolved.’

BJ has been playing the same kit for five years now, a Ludwig with three tom-toms and three cymbals; ‘I can play other kits but I don’t enjoy them,’ he says.  As regards musical taste, BJ says he likes it all.  ‘I listen to a lot of classical music;  I  get quite a lot of inspiration from that, the light and shade of it.  As for drummers, I like most people who are well known.  I like the two people who play with Dr John, and my own favourite drummer is Kenny Buttrey.  I judge people by how they are on stage.’