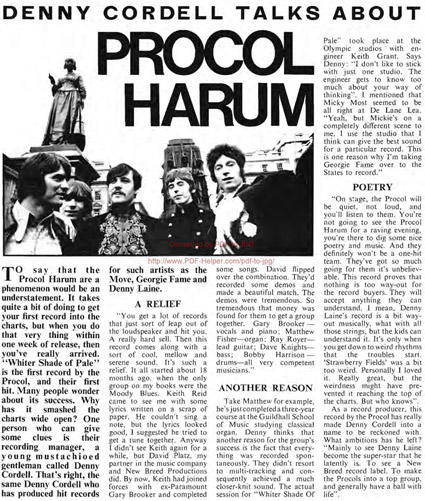 To say that the Procol Harum are a phenomenon would be an understatement. It takes quite a bit of doing to get your first record into the charts, but when you do that very thing within one week of release, then you’ve really arrived. Whiter Shade of Pale is the first record by the Procol, and their first hit. Many people wonder about its success. Why has it smashed the charts wide open ? One person who can give some clues is their recording manager, a young moustachioed gentleman called Denny Cordell. That’s right, the same Denny Cordell who has produced hit records for such artists as the Move, Georgie Fame and Denny Laine.

A RELIEF
‘You get a lot of records that just sort of leap out of the loudspeaker and hit you. A really hard sell. Then this record comes along with a sort of cool, mellow and serene sound. It’s such a relief. It all started about eighteen months ago when the only group on my books were the Moody Blues. Keith Reid came to see me with some lyrics written on a scrap of paper. He couldn’t sing a note, but the lyrics looked good. I suggested he tried to get a tune together. Anyway I didn’t see Keith again for a while, but David Platz, my partner in the music company and New Breed Productions, did. By now, Keith had joined forces with ex-Paramount Gary Brooker, and completed some songs. David flipped over the combination. They’d recorded some demos and made a beautiful match. The demos were tremendous. So tremendous that money was found for them to get a group together – Gary Brooker, vocals and piano; Matthew Fisher, organ; Ray Royer, lead guitar; Dave Knights, bass; Bobby Harrison, drums – all very competent musicians.’

ANOTHER REASON
Take Matthew for example, he’s just completed a three-year course at the Guildhall School of Music studying classical organ. Denny thinks that another reason for the group’s success is the fact that everything was recorded spontaneously. They didn’t resort to multi-tracking and consequently achieved a much closer-knit sound. The actual session for Whiter Shade of Pale took place at the Olympic studios with engineer Keith Grant. Says Denny: ‘I don’t like to stick with just one studio. The engineer gets to know too much about your way of thinking.’ I mentioned that Micky [sic] Most seemed to be all right at De Lane Lea. ‘Yeah, but Mickie’s on a completely different scene to me. I use the studio that I think can give the best sound for a particular record. This is one reason why I’m taking Georgie Fame over to the States to record.’

POETRY
‘On stage, the Procol will be quiet, not loud, and you’ll listen to them. You’re not going to see the Procol Harum for a raving evening, you’re there to dig some nice poetry and music. And they definitely won’t be a one-hit team. They’ve got so much going for them it’s unbelievable. This record proves that nothing is too way-out for the record buyers. They will accept anything they can understand. I mean, Denny Laine’s record is a bit way-out musically, what with all those strings, but the kids can understand it. It’s only when you get down to weird rhythms that the troubles start. Strawberry Fields was a bit too weird. Personally I loved it. Really great, but the weirdness might have prevented it reaching the top of the charts. But who knows?’ As a record producer, this record by the Procol has really made Denny Cordell into a name to be reckoned with. What ambitions has he left? ‘Mainly to see Denny Laine become the superstar that he latently is. To see a New Breed record label. To make the Procols into a top group, and generally have a ball with life.’