Procol Harum in Nashville and Atlanta 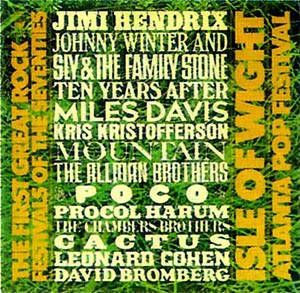 I had always known about Procol Harum. I was an avid follower of the music scene. Everyone knew AWSoP but I had never bought one of their LPs and didn't really know any of their other songs. In 1972 I bought an LP on Columbia called First Great Rock Festivals of the Seventies. On it was Procol's Isle of Wight Festival performance of A Salty Dog. It was just Procol minus orchestra and fancy studio production. The song totally grabbed me. I loved the playing and Brooker's vocal.

In the Summer of 1973 Procol was booked to play Nashville in the cozy (about 2,200 people) War Memorial Auditorium. They don't use this venue anymore (a shame). It was not too big and had great sound. I took my fifth-row seat knowing only two Procol Harum songs.

The opening act was an unknown act supporting their first single, Take it Easy, the Eagles. They were good ... those guys can play AND sing ... but I wasn't there to see them. Procol Harum, in a word ... ate their lunch. It must have been one of those nights bands have when everything really works. They played GREAT (despite difficulty which popped up later)!

I can't remember the whole set list (it is said that if you remember that era, you weren't there) but I do remember some cool highlights. A Salty Dog was a high point as well as Whaling Stories which as I recall started with a loud (recorded) explosion. Sitting at the piano, Gary's head flew back as if he was hit. Midway through the show (unbelievably) the power went out! I've never seen it happen before or since. There was a stunned silence, shrugging of shoulders and the band looking around wondering what the hell happened! The audience started to get into the act (remember it was a small venue) and began to call out requests. Someone called for BJ to do a solo (he just smiled) Suddenly Gary (in Jerry Lee Lewis style) broke into Great Balls of Fire and BJ followed. Terrific! Sometime later the power was restored. They showed a great sense of humor throughout the trouble and still turned in a moving performance. They ended with an intense version of Repent Walpurgis which left me totally spent.

I didn't know the song and my reaction was, WHAT WAS THAT! I talked about the show for days I enjoyed it so much.

I started picking up their LPs. The first show I saw, they were supporting the Live album. The following year, Grand Hotel was released. A good friend called me from Atlanta and said Procol was coming to Atlanta and he had two tickets and all I had to do was be there. The date (as I recall) was 26 April 1974; the venue, the Fox Theater. This was another small venue (2,500 to 3,000 people) with an orchestra pit!

We arrived and took our seats. I had come armed with an LP cover and an ink pen, determined to get autographs. (I have been a collector since 1970 when I got Eric Clapton's ... but that's another story). I left my seat and walked down front of the auditorium along the wall. This was a theater with curtains onstage and a set of stairs on each end of the stage.

There were police and security all around yet I walked right past them like I owned the place and before I knew it I was backstage. I made my way back until I got to the dressing room. The door was open and, noticing there were a lot of people in there, I casually walked in. The smell of pot was in the air and they were happily passing joints around.

The first one I approached was BJ who smiled this huge smile and shook my hand with much gusto. I asked if he would sign my album cover which he happily did. Next I got Gary Brooker's and Chris Copping's (who had groupies sitting either side of him). Finally I spoke to Keith Reid and told him how much I liked their music. I mentioned that I had seen them in Nashville and they all had a bit of a laugh remembering when the power went off. I asked if they were going to do Repent Walpurgis: I mentioned how great the version they did in Nashville was, and that it just about knocked me out.

Keith said," That's why we're not doing it this time ... too many casualties."

The LP cover I got signed was the Live at Edmonton album. I went to Mick Grabham and said, "I know you're not on this album but would you mind signing it for me?" He very kindly did so. I then thanked them all and made my way back to my seat, one very happy guy. (Incidentally, Mick Grabham seemed to be playing the same three (gold) pickup, white Gibson SG that Dave Ball was playing the first time I saw them)

Once again it was a great show. There were two highlights for me. As A Salty Dog began, and Gary sang, 'All hands on deck' (in the studio version there is a two note boatman's whistle that sounds) I stood up and hit those two notes (I can whistle pretty loudly). Smiles from the band, and the guy sitting in front of me turned smiling and gave me a high five.

The finale of Robert's Box was also scorching. I drove the over 300 miles back home with memories of another great show and the autographs are still with me and are included here.

Fast forward to 1985 and I'm at a Robin Trower concert at Nashville's National Guard Armory. One of Robin's roadies took me back to meet Robin so I could give him some collector tapes. I am a major Hendrix collector, and my name can be seen in a couple of major books on Jimi as a source.

On 4 September 1970, Hendrix topped a bill in Berlin along with Canned Heat, Ten Years After, and Procol Harum [setlist]. I gave Robin tapes of Jimi's performance from that night as well as some other rarities. I told him I had been a fan since I heard his solo on Repent Walpurgis many years ago and what a fan I was of Procol's music. He made a good natured remark about my age and posed for a picture with me.

At that moment, a man stood up across the room and said, "Let me see those?" (tapes): I thought it was Keith Reid but the classic curly hair and specs were gone and I wasn't sure. So I said nothing. I've been kicking myself ever since. I knew Keith had been managing Robin. Keith … if you ever read this ... I'm sorry about that … I am a life long fan.