These excerpts from New Musical Express, kindly selected for 'Beyond the Pale' by Yan Friis, show the release and the chart success of Broken Barricades, several Trower-induced personnel changes ... but the non-return of Matthew Fisher.

Chairmen of Board (sic)

Led Zeppelin put down in America (pic of Robert Plant)

Alice: A name that hopes to shock you (pic of Alice Cooper)

Tipped for the charts by Derek Johnson:
I Don't Blame You At All, Smokey Robinson & The Miracles
What's Going On, Marvin Gaye

Album pages has what the NME calls "two album review scoops", the second being Graham Nash's Songs For Beginners", the first (yes the heading is bigger and the picture too):

Members of the Procol Harum group discussed with me their new album, their fifth, aptly named Broken Barricades, because once again they have provided new directions in contemporary music. Procol has broken down the barricades presently surrounding rock and opened a new brand of music to young musicians and a wider spectrum of sounds for record buyers.

Despite the 5-million sales of A Whiter Shade Of Pale, the group's first single, they have since become a minority taste, their Home album selling a mere 200,000 in the US. Unlike noisy contemporaries (Grand Funk Railroad, Led Zeppelin, Humble Pie etc) Procol play rock music which is virtually indefinable because of its paradoxical intricacy and simplicity.

If the group's lyrics, all penned by resident poet Keith Reid, are difficult to understand, so is the group itself. Theirs is music that must be listened to carefully. They shun publicity and any explaining of what it is about. You have to listen to find that Home was about death.

Piano player-singer Gary Brooker agreed with me: 'Yeah, Keith writes the lyrics and whatever he's into the group just follows along. Last year it was death. This year it's sex ... sex and violence. That's Keith's current trip. Last year he was a bit gloomy.'

We talked in his hotel room, he lounging comfortably on the bed as he told me about the tracks of the new LP ... 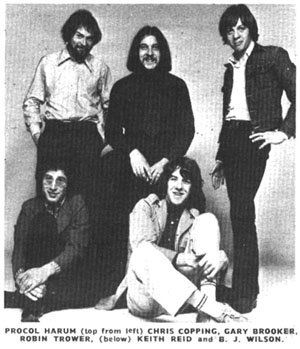 SIMPLE SISTER
'Music from the 23rd Century,' Gary quipped. 'Lyrically quite simple, but there's something very personal about it. A quick summary of a situation Keith ran into somewhere.'

BROKEN BARRICADES
BJ Wilson, drummer: 'A very personal song for the group.' Gary: 'Yeah. I agree with that. A bit strange really. Very internal. The words are the leaders and the rest of the album follows on.'

MEMORIAL DRIVE
'The song we start our concerts off with,' said Gary. 'It's good to dance to and went well in the studio. A bit of a boogie woogie number.'

LUSKUS DELPH
Gary: 'An obscene song. The treatment of it should be banned.' BJ Wilson: 'Like a Viennese Waltz, kind of.' Gary: 'When I think of erotica, I don't think in modern-day sense, with women in cake make-up, and incredible perversions. Luskus Delph is very gentle and dated. Fragile really. It may remind you a little of Sleepers Awake, at least in the way it falls right into your head.'

POWER FAILURE
'We're going to edit this into a single,' revealed Gary. 'I like this one. It's all about touring on the road and the situation when electricity is somehow cut off and we leave it to BJ and his drum solo to keep things going until we get the power back on.'

SONG FOR A DREAMER
Keith Reid explained this one: 'Robin Trower, our lead guitar, wrote it. He was most responsible for it and gives an indication the way he's going as a player and everything.' Gary: 'Think it works, too, whatever it is. It's a puzzle to me.'

PLAYMATE OF THE MONTH
'Another obscene song, at least to some people. It was recorded live, even the vocal, during a show,' said BJ. 'When I sent a copy to my mother I damaged this track!'

POOR MOHAMMED
Keith: 'The first track we recorded. It was our first time in the AIR, London, studios, those luxury rooms George Martin has in Oxford Street, London, and we were just finding out the sounds of the studio. We were really knocked out. Robin Trower sings on it, but he won't do it on concerts. Says he can't sing and play guitar at the same time. He plays steel guitar on the record, recorded before he sang.'

The whole of the album was recorded in London during February - March and very little was ready before the group went into the studios because they had just a week between ending an American tour and starting it. The songs just came to them as they went along and took about 35 twelve-hour sessions to complete.

They all consider Broken Barricades very important to their future and Gary is pretty confident it will be okay. 'By the standard of the album, it should be, but if it isn't a success it will be a foul miscarriage of justice!' he says.

'We just make the records and if the listeners are ready for them, great. We don't try to cater for mass taste, it's just what we want to do at the time and not what is selling at the time.'

A 648k scan of this article is here

THREE WAY SPLIT - WHAT NOW? (big pic of each of the four Free members)

Tipped for the charts by Derek Johnson:
River Deep - Mountain High, Supremes & Four Tops
You And I, Brotherhood Of Man
I Sure Like Your Smile, Southern Comfort

NMExclusive. WINWOOD ON THE FUTURE OF TRAFFIC (big pic of Steve Winwood)

Leon Russell and Shelter People, Leon Russell
Take A Swing With Me, B.B. King
34 Hours, Skid Row
If You Could Read My Mind, Gordon Lightfoot
House On The Hill, Audience

Tipped for the charts (picked by various journalists)

Ringo Starr topping the charts with It Don't Come Easy

Midde of the Road

Quote from Roy Carr's Question & Answer with ELP's CARL PALMER
(regarding ELP's first US-tour)
...All the bands that we played with... Procol Harum, T.Rex, the James Gang, all freaked out over our stereo p.a. system. In fact we are going to leave one over there and hire it out...

Carole King topping with It's Too Late.

Just some comments as we pass the half-year mark:

The NME news pages are dominated by stories on bootlegs this summer. Looks like it has turned into big business, and the record companies are in shock - and rage.

And Procol Harum? Are they in the news picture, new album out and all? Of course not. As usual they pick the perfect time to involve themselves in domestic trouble. So while everybody else is happy touring, doing the festivals, plugging their new records, Procol Harum are losing the guy who more than anyone put his stamp on their latest album: Robin Trower. What a clever move, just before they were off for their US tour! The summer of 1967 isn't that far away, is it?

TROWER QUITS PROCOL
Guitarist Robin Trower has left Procol Harum to form a new group, and his place in the outfit has been taken by Dave Ball. Procol also added bassist Alan Cartwright from Every Which Way - this will enable Procol's Chris Copping, who has been doubling on bass and organ, to concentrate on his organ playing. But Matthew Fisher, an original group member who left after its initial success with A Whiter Shade Of Pale, will not now be rejoining Harum as was intended.

Procol's lyricist Keith Reid explained: "Matthew was going to rejoin us, but he had taken on commitments which made it impossible for him to be a permanent member of the group. We felt it would be unfair to our audience if we changed the line-up again after a few months."

Harum, whose current album is Broken Barricades, returns to America at the end of this month for its 11th tour of that country.

(And wouldn't you know, this is the week that yours truly arrived in London for the first time in his life. Living in a camp at Wormwood Scrubs, drinking lagers at the pubs down Leicester Square, buying bootlegs in Carnaby Street as well as the Procol Harum-compilation on Fly, being offered LSD by a smiling Frenchman, but not daring to try it... )