1997 July: Ringo and friends at the Mohegan Sun: Brooker was musical star of the show 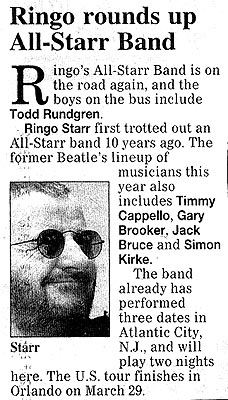 1998 August: reviews from Skanderborg, where some squirrels stole the beer

1998 August: Dublin: A Salty Dog sails the Liffey, and AWSoP brings Dubliners to their feet

1999 16 February at the Beacon Theatre in NYC: more on this here

Ollie writes: the Ringo All-Starr video is currently available through Beatlefest (1-800-BEATLES). It has footage that we didn't get in the Connecticut show, including A Salty Dog. Just thought folks would like to know. Taking turns in trying to pass it on ...

Marvin Chassman writes: here's a site with Gary / Ringo photos and stuff; and here's another with a bit more commentary: BJ got a mention! And for all you complete-niks out there, check out this link in regard to the 3-disk Ringo's All Starr box set: Gary is featured on 4 songs on disk 3: The Devil Came from Kansas, A Salty Dog, A Whiter Shade of Pale and Conquistador.