Ringo Starr and his All Starrs

Ringo Leads Mystery Tour Back to the '60s

Ringo Starr fronted his All-Starr Band for only half of the 20-song set at the Mohegan Sun Monday Night, but the once-and-always Beatle acted as a master of ceremonies as his crew of notables led the Baby Boomer audience through a musical tour of their youths.

The decades rolled away as peace signs and Bic lighters waved in the dark over the heads of the 40-something crowd in the casino’s Event Center. While Ringo evenly split his songs between Beatles songs and material from his solo career, the evening included the music of Cream, courtesy of bassist Jack Bruce; Procol Harum, thanks to keyboardist Gary Brooker; and '70s guitar hero Peter Frampton.

Introducing You're Sixteen, Ringo said, 'I’d like to do a number for all the young girls in the audience.' He peered out and asked, 'Are there any young girls?' There were at least a few dozen among the 1,400 in the sold-out crowd – all there with their moms and dad, who grew up on the night’s music.

Ringo makes an unlikely front man for a rock band. Through his 10 songs, which included It Don’t Come Easy, Boys, and Act Naturally, he shuffled around the front of the stage in his silver shoes and star-studded shirt with a hunched posture, occasionally punching a peace sign over his head.

Guitarist Frampton, whom Ringo aptly called 'an audience hog', urged the audience to dance, giving Sun security headaches as the anything-but-dangerous group crowded the stage. Ringo urged the crowd, 'I want to hear a lot of singing on this song, because you all know it,' and lit into Yellow Submarine. He was right; everyone knew it and everyone sang.

The band punched out a loud, arena-rock set. No one has to convince Bruce and Frampton to play loud, and the line of Marshall amps onstage gave ample notice.

But the musical star of the night was Brooker. Wearing a black suit with a diamond-studded G-clef lapel pin, the 50-something Brooker wore his white hair slicked back, looking more a distinguished banker than rock musician. His distinctive voice soared through his three Procol Harum songs – The Devil Came from Kansas, Conquistador and Whiter Shade of Pale, as if three decades made no difference.

Each of the band members, including drummer Simon Kirke of Bad Company, fronted the All-Starrs for hits from their original bands. Ringo introduced the set by saying, 'Everyone on this stage is a star in his own right. And I’m just lucky we could all go on holiday together.'

Bruce sang Sunshine of Your Love, I Feel Free and White Room, with drummer Kirke proving a fine student of Ginger Baker’s unique tom-tom style. Frampton showed his respect for Eric Clapton by starting each of his guitar solos for the Cream songs with a cover of Clapton’s original – before taking off on his own brand of one-style-fits-all soloing.

For two of his songs – Show Me the Way and Do You Feel Like I Do – Frampton employed his trademark talking guitar solo, in which he sticks a plastic tube in his mouth to vocalize the amplified guitar sound, a technique that mercifully found no imitators.

While the other band members took their turns in the spotlight, Ringo retreated to stand at a second drum set. Bruce’s mega-bass style and Frampton’s excesses gave the show an arena rock sound that worked fine with the Cream material and the power chords of The Devil Came from Kansas, but was too heavy-handed for some of the Beatles numbers.

The set was tight – except when Frampton hammed it up through a couple of interminable solos – and good-natured, with Bruce seeming particularly amused at banging out the high-volume fare again. It had the feel of a 25th class reunion, with the mates getting together for rave-up, just like the old days.

As the set was ending, Ringo introduced the band a second time and paused. 'Okay, let’s hear it for me.' The delighted crowd needed no coaxing. 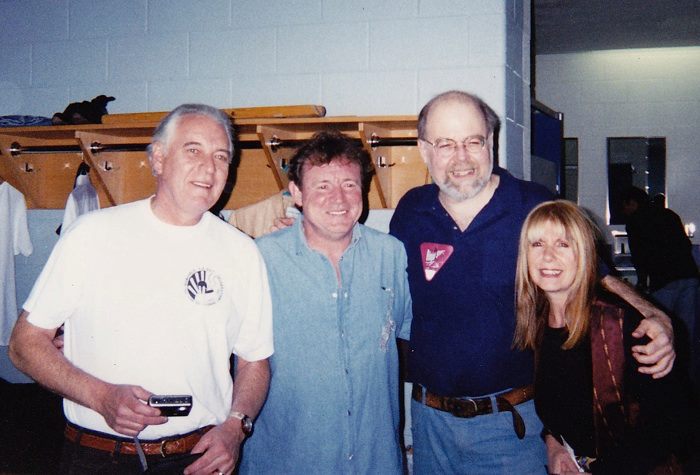 My friend Gary Brooker, Jack Bruce, Ed Sciaky and me ... Ed and I had gone to see them in Ringo's All Star Band in NJ, can't remember the year!!!

Kerry Holloway, who sent us this review, adds: [the gig] was held at the Mohegan Sun Casino, an Indian casino which is outside the city of New London a few miles. The review is from the New London Day, the city's newspaper. I was able to attend, and Gary was fantastic. AWSoP got a standing ovation and was probably the best-liked song of the entire evening! Gary also had a few solo lines at places where his piano playing was fantastic. Some could even be a song in themselves.