and his Procol Harum connections

Mickey Jupp is a great songwriter with very down-to-earth lyrics and a lot of connections with Procol Harum.
Mikael Werkelin details these connections for 'Beyond the Pale'.

They followed that with one gig at Staines, Middlesex and broke up just before the album's release. The album was an acoustic pop / R&B album with Jupp on vocals, guitar and piano, Chris East on vocals, twelve string guitar & harmonica, Steve Geer on string bass (on some songs played with a bow) and vocals and Nigel Dunbar on drums . The "unplugged" album stills sounds fresh today.

Jupp still had a record contract, but no band: he got some help from the Procol camp. David Knights, who had just left Procol Harum, became Jupp's manager. With help from some old friends from Procol Harum, he recorded a single as Legend. The song is called Georgia George (Part One) and is a primitive rocker close in style to some of the rawest Paramounts tracks. [See here for Frans Steensma's authoritative additions to this account]

The story of Legend then continues when Jupp came to put together a new band. The new Legend had Jupp on vocals, guitar and piano, Bill Fifield on drums, Mo Witham on guitar and John Bobin on bass. They recorded an album called, once again, Legend, for Vertigo in 1971: it is known as 'The Red Boot Album' because of the red boot on the cover. It's a very good album, produced by Tony Visconti for David Knights Productions. Bill Fifield then left to join T Rex as Bill Legend. At his home page, Tony Visconti says: 'Bill and I had worked together when he was the drummer in the group Legend, a superb rock and roll group headed by Mickey Jupp, from Southend. Bill played great on Hot Love and Marc made him an offer he couldn't refuse.'

The second and last album by Legend was called Moonshine, also on Vertigo (1972). Bill Fifield had been replaced by Bob Clouter. The album was not as good as its forerunner, but the contributions from Procol continued. Once again it was produced for David Knights Productions, but by the band themselves this time. Matthew Fisher arranged strings on three songs. Legend Mk III (Jupp, Bobin, Clouter, Witham) broke up in 1971. Now, the story goes as follows (a conversation Paul Moules -of the Mickey Jupp homepage- had with John Bobin). "We played a gig somewhere in the north of England and was driving down to Dover to catch the ferry to drive across to Italy (MJ didn't fly at this stage of his life). They were trying to think of ways of getting out of doing the gig, in the end John rang the promoter and said they couldn't make it, thinking that they were one of several bands doing the gig. They ended up going across to Italy as they found out they were the only band booked at this venue. On their return, Bob and John left the band which spelled the end of Legend.

It was complete silence until Dr Feelgood, The Kursaal Flyers and other new pub-rock bands started mentioning Mickey Jupp as a source of inspiration. It was 1977 and Jupp got a new manager in Keith Reid and Strongman Management. Arista Records signed Mickey Jupp and released a new single, Nature's Radio in 1977. The song was beautifully produced by Pete Solley (of Procol Harum) and should have been a hit, if 'if' didn't exist. Tim Renwick, who later played with Brooker, played guitar on the track. A Stiff record deal and a compilation in 1978 of old Legend material followed the single.

Mickey Jupp's first solo album, Juppanese, was released in 1978. Nick Lowe produced side One, and Rockpile backs Jupp. The musical style on Side One was British R&B with the piano on the foreground. Side Two is produced by Gary Brooker, a very tasteful production with very good musicians: Gary on piano and Hammond organ, Jupp on vocals, guitar and piano, Chris Spedding on guitar, Bruce Lynch on bass and Dave Mattacks on drums, the last two from Gary's Fear of Flying album. The songs on Side Two are much more varied in style and the production is superb! The album is re-released on CD and is highly recommended. . Mickey then set up a touring band in which Mick Grabham played guitar for a while. Grabham did not appear on any studio album but his great guitar playing can be heard on four tracks on 12" BBC tapes from 1981 (wrongly credited as Ian "Chuck" Duck) later re-released on the CD Oddities in 1987. Three of the tracks was released in poorer sound quality on Live At The BBC released in 2004 (but with Grabham credited for the guitar this time).

As a thankyou for producing the album, Mickey gave a song, Switchboard Susan, to Gary and Nick of which they both made their own versions. Gary Brooker also recorded Pilot, one of the tracks from Juppanese. I don't know if Mickey ever performed on any Procol or Brooker records, but the backing vocals on Chasing The Chop (b-side of Leave The Candle by Gary Brooker) are sounding suspiciously like Jupp's very special backing vocals. Though it is said that Gallagher and Lyle sang these, I believe the style was very much influenced by Jupp.

Between 1977 -1984, all of his songs were published by Bluebeard Music (Keith and Gary's company). In 1979 Jupp made an album for Chrysalis (same record company as Brooker), Long Distance Romancer, which was produced by Kevin Godley and Lol Creme: a very funny album with a lot of different styles.

His next album, Oxford, (Smash Records, 1980), was produced by Gavin and Iain Sutherland of Sutherland Brothers & Quiver. Iain Sutherland later contributed with some lyrics to Brooker's Echoes In The Night album. Dave Bronze (later to be a member of Procol Harum) played bass.

Then Jupp signed with A&M and produced two albums: Some People Can't Dance (produced by Mike Vernon) in 1982 is Jupp on top form and includes the single for the London Marathon in 1982 Joggin'. Shampoo, Haircut and Shave in 1983 (produced by Francis Rossi and Bernie Frost) was not as good as its forerunner. On the cover he thanks Keith Reid and Nick Blackburn (once Procol Harum's manager) 'for making me an overnight success' ... which he never was! 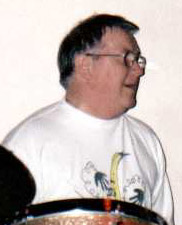 MJ was then sent to Nashville to try and write/record with various artists. He did some stuff with Ry Cooder and out of this trip Tears For You was picked up by The Judds which sold more than three and a half million singles! In 1988 he got a record-deal with Line Records in Germany (who also reissued Gary Brooker's solo albums). The CD-album X from the same year has some very good songs, but the performance is disturbed on most of the tracks with a drum machine. He was now collaborating with guitarists Chris East from the first Legend and Mo Witham from the second Legend. On four tracks a drummer with Procol Harum connections joined him: Mick Brownlee, the original drummer of The Paramounts (pictured)! On As Years Go By (Line, 1991) and on You Say Rock (Gazell, 1994), the latter recorded in Sweden with the Swedish singer Jerry Williams (real name Erik Fernström) as producer and Swedish musicians, Jupp is back on good form again.

Nowadays Mickey has not performed live since 2001 as he's living a quiet life in Cumbria running a craft shop! Mickey Jupp has never reached the success he deserves. His only success is that he has been covered by artists like: Gary Brooker (of course), Dr Feelgood, The Records, Elkie Brooks, Nick Lowe, Dave Edmunds, Roger Chapman and many more.

The Procol Harum connections will never end! In 2000 a live concert CD from 1992, One More Time, with Procol Harum was released. In the beginning of Whisky Train, Gary sings and plays a few bars from Jupp's Bartender's Blues, from the first Legend album.

Thanks to Paul Moules and Lars Kärrbäck for providing me with additional information for this page. Please take a look at the Mickey Jupp homepage: www.mickeyjupp.se

Great news: Legend release a brand new album in 2008. Please visit http://mickeyjupp.com/ for more information. The Legend album is re-released on CD by Repertoire and they will soon release all Jupp’s solo albums on CD.

Many thanks to Mikael for sending us this excellent article, and updating it twice later