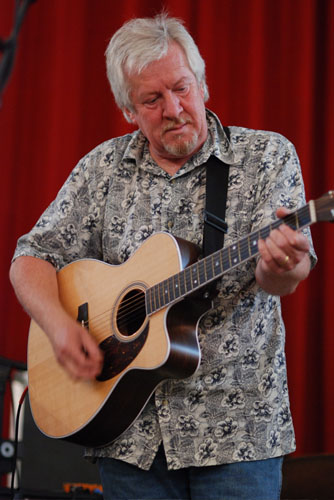 Frans Steensma writes: Tim Renwick learned how to play acoustic guitar in 1966 and before working with Gary Brooker played with The Wages Of Sin, Little Women, Jackie Lomax Band, Juniors Eyes, Quiver, Sutherland Brothers & Quiver. The very first band he played in (before Wages of Sin) was called The Spanish Gentlemen. He says: "I inherited my stage outfit - a string tie, black waistcoat and 'Zorro'hat - from the previous guitar player."

Played in the seventies on a unique guitar (Morch), designed by Thomas Puggaard Muller and made in Denmark (a prototype). His "old faithful" is a Fender Stratocaster.

First played with Procol Harum on 18 October 1977 at a show held at Wembley Conference Centre, London to mark the Queen's Silver Jubilee (1952-1977). A Whiter Shade Of Pale was named joint winner (with Queen's Bohemian Rhapsody) as Best British Pop Single 1952-1977 at the British Record Industry Britannia Awards. The line-up (see illustration below) was Brooker, Tim Renwick, Copping, Cartwright and Wilson: it was the last time BJ played with Procol.

Tim played too many sessions to mention; his own discography is here, but the following records are interesting for Procoholics: Matthew Fisher, Mickey Jupp's Legend (on a song called Nature's Radio, with Spinetti on drums and Pete Solley on piano / production), two Lazy Racer albums (again with Spinetti): Lazy Racer (1979) and Formula II (1980) and Tim Renwick (his solo album from 1980 (CBS 84082) where Gary Brooker can be heard playing a Yamaha CS 80 on three tracks: Two-way Track, Lip Service and Dark Island. The first two are Renwick / Davis compositions, the last one traditional, arranged by Renwick. 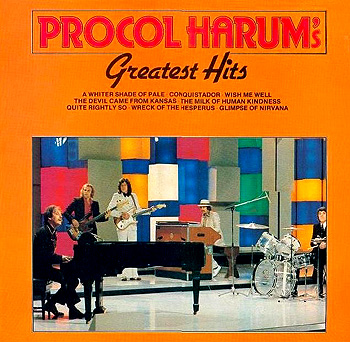 Tim also toured with Mike Oldfield (he had to play, among other things, recorder there!) in the early eighties and with Mike And The Mechanics.

He was also on stage as the guitarist on Pink Floyd's Tour (Pulse a.o.) and played the guitar on several albums  of Elton John (A Single Man) (thanks HanDs)

Tim also played on Al Stewart's hit albums Year of the Cat (1976) and Time Passages (1978), the latter with Procol's Pete Solley on keyboards (thanks, Joan)

Toured with Eric Clapton (85) and can be heard on 'Live Aid' show from Philadelphia with Eric in '85 and a video recording Live from Hartford Connecticut that same year.

Tim also played on these singles by China Crisis [all produced by THAT Walter Becker] : Black Man Ray no.14 UK singles chart; King in a Catholic Style no.19 ditto; You Did Cut Me no.54 ditto; most interestingly to Procoholics, however, he is the guitarist with Gary Brooker band, who played an 18-song set on German TV in 1983 on the Rockpalast programme (thanks, Sam)