Paramount Mick Brownlee writes to 'Beyond the Pale' with this news item and mini-biography. The photograph – Jupp on guitar – was taken at the gig itself by Peter Christian

The man they call the “Godfather of Southend Rock” is returning to his home-town for a one-off concert for the first time in more than five years.

Mickey Jupp, who has released more than twenty albums and compilations, will be appearing at his old stomping ground at Club Riga, at the Cricketers Pub, in London Road, Westcliff, on Saturday 12 March. 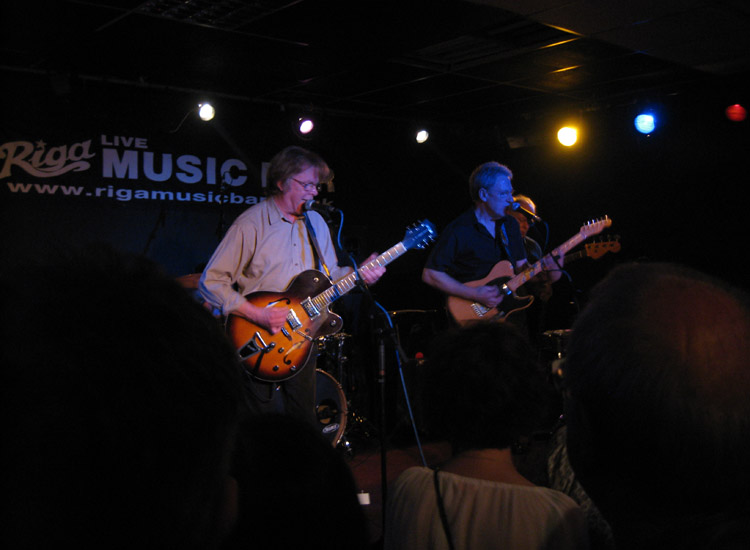 Jupp has recorded for major record labels like Arista, Bell, A&M, Stiff and Vertigo, and has seen his songs covered by acts like Rick Nelson, Nick Lowe, Elkie Brooks, Delbert McLinton, The Judds and Darrel Higham. Not to mention local heroes, Dr Feelgood.

Semi-retired at 67, Jupp now makes his home in Cumbria, playing live infrequently, but has been persuaded to make the Southend appearance by long-time cohort Mo Witham, who has put together the band for the occasion.

Show organiser Mick Brownlee, drummer in support band Hunt Runt Shunt and Cunningham said, “The evening will be like a Who’s Who of the rock’n’roll scene in Southend dating back to the fifties. We anticipate a full house, and suggest early booking.”

Lead singer of Hunt Runt etc is Tony Sumner, named by hitmaking Southend band The Paramounts as a major influence when he fronted seminal Rockafellas, who played Southend dancehalls in the late fifties. Bass player in the band is John Bobin, who played alongside Jupp in Legend, the band that bequeathed Marc Bolan’s T-Rex a drummer when he went electric.

Mick Brownlee played in the first line-up of The Paramounts, who morphed into Procol Harum when they were based at The Shades nightspot on Southend seafront, just a few hundred yards away from where Mickey Jupp grew up in Thorpe Bay.

Jupp played in several Southend bands after leaving art college in 1962 and was in the R&B group The Orioles (1963 – late 1965), which included Mo Witham (guitar, vocals) and Bob Clouter (drums), but the band never recorded.

After a break from music, Jupp formed Legend in 1968, signed to Bell Records. They released a self-named album Legend, a mix of pop, rockabilly and blues rock styles acoustically. A second  lineup, with Mo Witham on guitar, John Bobin on bass and Bill Fyfield on drums signed with Vertigo in 1970.

Confusingly, their second album was also called Legend, but is  referred to as the "Red Boot" album, after the cover picture. Fifield left to join T.Rex (where he was re-named Bill Legend, after the band he had left, by Marc Bolan), and was replaced on drums by Bob Clouter, who had played with Jupp in The Orioles. This lineup recorded the second Vertigo album Moonshine issued in 1971 (and re-released on CD in 2007),

Returning to Southend, Jupp formed the Mickey Jupp Big Band that featured at Southend’s first and only Rock Festival at Roots Hall, which featured Bob Fish, later of The Darts – until the pub-rock revolution featuring local bands such as Dr. Feelgood, for whom he wrote the hit single Down at the Doctors created fresh interest in rock and roll. He signed to Stiff Records in 1978, and they initially released a compilation album of the first three Legend albums, which was also called Legend, giving three albums with this title.

It was subsequent to that release that the influential NME magazine dubbed Jupp “The Godfather of Southend Rock,” and he appeared on the second national Stiff Records tour, the subject of a TV documentary. This was followed by his first solo album, Juppanese.

The follow-up album Long Distance Romancer was produced by Godley and Creme, of 10 CC, and he worked with a number of name producers, and despite music industry acclaim, Jupp always managed to give mainstream success a swerve.

Jupp went on to release a further seven solo albums, some appearing on Swedish and German labels, and last year released a live album with Mo Witham’s band that included some of the stage favourites from yesteryear that Jupp had not otherwise recorded.

He continues to be held in high esteem, but prefers to keep his head down, running a gift shop in one of the most picturesque parts of the UK