but who was Procol Harum's final guitarist in the 70s ?

Procol Harum have transplanted a guitarist's head before ... Mick Grabham's head got grafted on to Dave Ball's body on the cover of Grand Hotel. But did it happen again? In January 2000 the following [edited] conversation arose on the Procol Message list about the identity of an unfamiliar guitarist in a compilation album cover. Further down this page, the speculation is settled very interestingly by Procol historian, Frans Steensma, with a footnote by Alick Leslie.

RC: who is the guitarist with Procol Harum on this album-cover [here] ... can anyone inform me please? It should be Mr Ball or Mr Grabham, shouldn't it ... maybe it's another head-transplant, as on the cover of Grand Hotel ... but why?

SC: I think it is not the ongoing combo: it's after they split up and it could be Tim Renwick or somebody like that on guitar for a TV one-off reunion ? Brooker does not look like the up-to-1977 model and Wilson looks as if it's 1965: so is it a picture of fakery dubbed from different pictures? I have seen this before and thought it looked a bit like Fisher in Copping's clothes with a hat on: hey why stop at guitarist head-transplants? We can do organ transplants too...

BP: Oh, 'tis more than a head transplant. Dave never dressed like that, not to my knowledge. Are those even BJ's drums?

LP : but ... it is Dave Ball. Look really closely at the face and he DID stand like that too 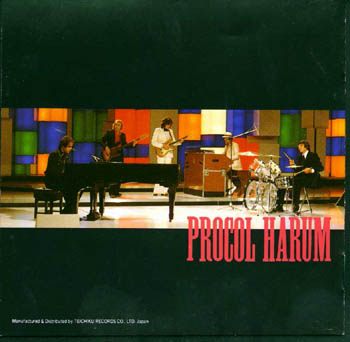 SC: does nobody else think this is Tim Renwick on guitar circa 1983-6, as he looked like that in those clothes ... I thought I saw this same picture on another compilation possibly the Dojo with either no guitarist at all or a different from this one but I suppose I am only imagining things ... the Alan Cartwright looks of 74 / 75 vintage ...

BP: I sent that photo to Dave and this was his response: 'You're absolutely right. It could not be me : in a SUIT???'

LP : You're right. I was mistook! ;+). Just how blind ...SC: it turns out I am not totally daft: if you go to the Japanese Procol comp [here] you will find a picture with a lot in common with the one we discussed today; it maybe crops up in some guise on some other comps as well.

RC: here's the more familiar shot of the same line-up ...

PK: I showed this to Gary B. (at Minneapolis or Edmonton '92, I think), and he said it was from the "one off" show in '78 (I think) when AWSoP was named co-Best Song of the past 25 years along with Queen's Bohemian Rhapsody (or whatever). I believe they performed AWSoP live, and the line-up was Brooker, Fisher, Wilson, Cartwright, and Renwick. (As usual, any of this information should be verified with Gary B. or other knowledgeable sources.)

LP : my understanding is, however, that Matthew and Gary did not have any interaction at all until the early 1980s, right before Echoes ... How then could it be Matt on organ? Renwick it does look like after all. And that synth on top of the C3 is Copping's Arp Odyssey.

BP
Good observation La.....(I wouldn't know about any of that btw BUT another observation of all things? That cleft in the chin of Maf definitely belongs to Chris.

Speculation looked set to roll on and on, until BtP contacted Frans Steensma, the first 'knowledgeable source' who springs to mind when questions of this nature arise. Frans's response was immediate, and did not disappoint!

The guitarist in the picture is Tim Renwick (as usual, Sam and Pat were dead right).

On 18 October 1977 a show was held at Wembley Conference Centre, London to mark the Queen's Silver Jubilee (1952-1977). A Whiter Shade Of Pale was named joint winner (with Queen's Bohemian Rhapsody) as Best British Pop Single 1952-1977 at the British Record Industry Britannia Awards.

Procol reformed for this occasion to perform AWSoP live. The line-up was Brooker, Tim Renwick, Copping, Cartwright and Wilson. This was remarkable as Alan Cartwright had left Procol in June 1976 and Chris Copping had joined Frankie Miller's Full House (managed by Keith Reid) in April 1977 (and toured the States with Frankie in June 1977). And because Renwick was part of Procol for the first time. It's also interesting to note that it was the last time BJ played with Procol (I bet it was the first time he wore a tie while playing with Procol!).

At the same show Julie Covington performed Alice Cooper's Only Women Bleed. She was backed by Procol. This was the first time GB & BJ had backed a female singer since the Paramounts backed Sandie Shaw for five months in 1965.

On 20 October 1977 this award show was simultaneously broadcast on BBC Radio & TV. BFI listing is here

At the time of this show no official announcement had been made about Procol's future since their last gig at the Academy Of Music (15 May 1977). The only announcement that was made was the one by Mick Grabham (''I've quit Procol" - NME, 11 June 1977). Here Mick stated: "I'm currently in the studio with the Sutherland Brothers & Quiver, taking over temporarily from ... Tim Renwick, while the band prepare and record their new album".

True, as Mick is credited for playing lead guitar (together with Ray Flacke and Tim Renwick) in the liner notes on SB&Q's Down To Earth (1977). On the cover it can be seen that Renwick had left SB&Q (only Gavin, Iain & Willie Wilson pictured).

So it was no real surprise that when the Procol split was confirmed in MM & NME 6 January 1979 it said (in MM): "Former Procol Harum singer and keyboard player Gary Brooker is about to start recording his first solo album with producer George Martin and a band that includes Tim Renwick (!) When I asked Gary what he had been doing after Procol's split in May 1977 (next to fishing and resting after ten tough Procol years), he stated: "I started writing some songs with ...Tim Renwick." (!)

The rest of the story is well-known: Renwick played lead on No More Fear of Flying, co-wrote Give Me Something To Remember Me By, played on a couple of songs on Lead Me to the Water and performed exquisitely with GB's SS Band on The Rockpalast Show (18 February 1983, Markthalle, Hamburg). Renwick also guested on Echoes in the Night, where he played rhythm on the title track and lead on The Long Goodbye (great solo!) and Missing Person. Which makes him the only musician (next to GB of course) to have played on all three Brooker solo albums ...

One final addition: in December 1977 a Procol 12" was released in the UK: AWSoP / Homburg (Cube LBUG 77). On the front of the black and white cover it says: Winner of the Britannia Award for the best British Pop Single in the last 25 years.

Seems I got carried away a little with the subject. I promise my next contribution will be a short one!

Alick Leslie adds
There is another CD with the same picture shot, called Pilgrim's Progress. It's a CD / CD-ROM with a 36 minute show from 1971, both in audio and video. The show [aka 'Beat Club'] has Shine On, Wee Small Hours, Still There'll be More, Pilgrim's Progress, Quite Rightly So, Magdalene, Power Failure, Salty Dog, Simple Sister: it's not bad at all, a bit grainy on the video side but can't complain. I'd puzzled over the cover too, couldn't work it out. I think the CD is official - I just ordered it from one of the big mail order firms in Mojo.

Frans adds
With Pilgrim's Progress (Video CD, MasterTone Multimedia MM5117, Germany / UK, 1995) is a booklet with the same shot that's on the cover of this Video CD, reprinted in black and white.

Per Hermansen (thanks for the scan!) adds that the track-listing, as written on the inlaycard, is: Shine on brightly / In the wee small hours of sixpence / Still there'll be more / Pilgrim's progress / Quite rightly so / Magdalene, my Regal Sonophone [sic] / Powerfailure [sic] / Salty dog [sic] / Simply sister [sic] (4 of 9 spelt wrong!)