These excerpts from New Musical Express, kindly selected for 'Beyond the Pale' by Yan Friis, show how the Procol split was confirmed only by the start of Brooker's solo career: he's still a 'cult figure' to his publicist, but damning reviewers consider the music of this 'friendly old ruminant' to be 'too tasteful by half' (unless they're closet Stalinists!) 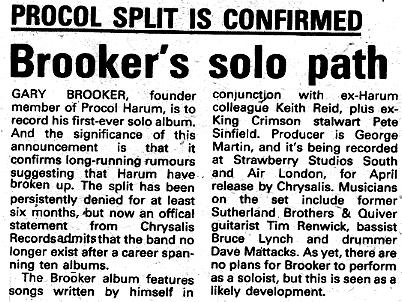 Gary Brooker, founder member of Procol Harum, is to record his first-ever solo album. And the significance of this announcement is that it confirms long-running rumours suggesting that Harum have broken up. The split has been persistently denied for at least six months, but now an official statement from Chrysalis Records admits that the band no longer exist after a career spanning ten albums.

The Brooker album features songs written by himself in conjunction with ex-Harum colleague Keith Reid, plus ex-King Crimson stalwart Pete Sinfield. Producer is George Martin, and it's being recorded at Strawberry Studios South and Air London, for April release by Chrysalis. Musicians on the set include former Sutherland Brothers & Quiver guitarist Tim Renwick, bassist Bruce Lynch and drummer Dave Mattacks. As yet, there are no plans for Brooker to perform as a soloist, but this is seen as a likely development.

Can you imagine? Asylum just gets worse. It's getting to the point that whenever Jackson Browne rings me I have to pretend I'm not in. I ran into Joni in MacFisheries before Christmas and when I signalled that I'd lost my voice and was in a hurry she gave me a most frightful glare. What to do? (This is the complete 'review', honest!)

Gary Brooker does not get an individual review. He is thrown in with the following 45s:

The cynical desecration of the big ballad, the torch song, the easy-listening landmark - now that Bacharach and Webb have had their heads up their asses for years - is a modern day horror-story.

Once the territory of Anyone Who Had A Heart or Wichita Lineman - MOR is now a faded party-girl, drunk on attention and flattery, the playground of any jaded old rocker who's (a) been rejected by the youth market, (b) is totally tired and wrung-dry when it comes to writing half-way decent lyrics or melodies, yet has no other trade save that of making records and finds that MOR is the market where you are most likely to get by stringing cliché after cliché together, (c) has no say in the material he is given, and possesses so little chart-potential that song-writers have started giving him the freedom of their dust-bins ...

... Doesn't Gary Brooker feel silly singing about an esoteric Southern state, or does he feel smart when he hears people like Linda Hayes singing about California? Does he hold any hope for a successful come-back on this record? Will he get them to re-release A Whiter Shade of Pale again when the thirst for that certain chart placing gets too great?

These questions may not seem relevant, but the people concerned are so obviously treading water till something - anything - else comes along that it would be unkind to take these records as pieces of product, even to me they're just the flotsam of an industry that is so inflated, soft and over-crowded, which has so much money just floating around within it that record companies can string along unwise, unexceptional entertainers for years, fooled into thinking they're in with a chance. There should be some kind of quality-control board for this sort of thing; come back, New Faces - better that the sub-mediocre should be warned off while there's still time for them to go after something else, Or else ...

Ian Dury & the Blockheads, Do It Yourself
Gerry Rafferty, Night Owl
Donna Summer, Bad Girls
Dr. Feelgood, As It Happens

Here come The New Barbarians, same as The Old Barbarians, On the road wiv Ron & Keef by Charles Shaar Murray (big pic of Ron Wood & Keith Richards)
Bowie's Lodger - Glooms To Let, Off the road with Angus McKinnon
The Tubes - Life Is Just One Long Talk Show, On the box with Fee Waybill by Tony Parsons
Beneath The Undertones, In the back of a Transit with Feargal Sharkey by Paul Morley
Whatever Next Dep, ZEP PLAY GIG SHOCK, Knebworth, actually. 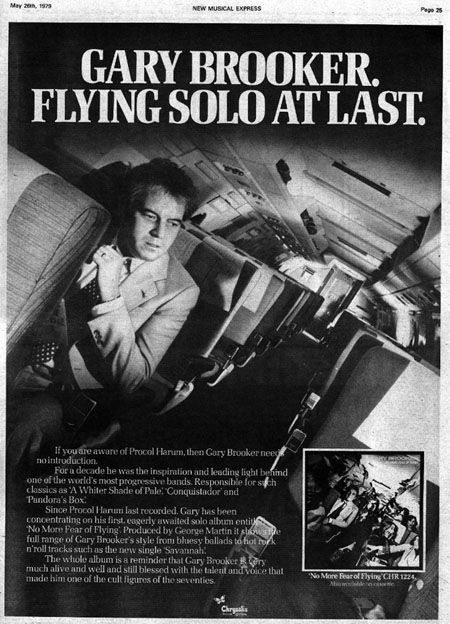 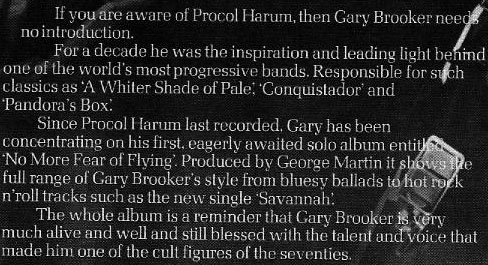 Procul [sic] Harum always was an ungainly beast, about as capable of conveying urgency as Colin Cowdrey or Bobby Moore. They even did a rocking tape for radio once, using a pseudonym to try and shake off their Il Ponderoso image, but with some of Britain's more faceless musicians usually in the ranks, such attempts were doomed to failure.

After finally packing it in, Gary Brooker very nearly joined The Hollies during one of Allan Clarke's sabbaticals and in fact wrote and performed on Harlequin, a track from their recent 531-7704 album. But instead he took a deep breath and made No More Fear Of Flying, of which only the title track - an indifferent shuffle celebrating the end of Procol - was written with lyricist Keith Reid.

In his press release, Brooker explains that 'it makes a difference when you're singing about a woman as opposed to singing about a typewriter'. Fair enough, but what does he do next? Ropes in Pete Sinfield, that's what - nothing like jumping out of the dictionary into the thesaurus.

Produced by George Martin and featuring Tim Renwick on guitar, the album is inevitably too tasteful by half. Bruce Lynch contributes some incisive, McCartneyesque bass to Let Me In. But most of the material confines him and drummer Dave Mattacks to a steady plod.

Trouble is, Brooker's voice is irredeemably doleful, rendering Mickey Jupp's Pilot listless rather than evocative. Only Savannah and Jupp's Switchboard Susan break the stranglehold. (With Susan recurring on Nick Lowe's next album and a swing version of Down At The Doctor's as the current Feelgood's B-side, Mr Southend should have no trouble keeping himself in 'Kiss Me Quick' hats this summer.)

Sinfield's words aren't audibly offensive - I refuse to read lyrics - but the Don Juan sentiments of Get Up And Dance and Angelina fall laughingly [sic] flat when sung like Levon Helm after a heavy lunch. Similarly, Murray Head's Say It Ain't So Joe, a 'whither mankind?' effort of some substance, is done far better [sic!] by Allan Clarke on '531-7704', suggesting The Hollies would've been hard done by had the transfer gone through.

Gary Brooker's delight at his new freedom suggests the musical equivalent of some lusty stallion released from the paddock. Instead Flying reveals him merely as a friendly old ruminant.

Singles reviewed by Julie Burchill:
SINGLE OF THE WEEK:

The song not the singer. Gary Brooker sings Say It Ain't So Joe as well as I've heard it sung, which isn't to say he sings it best, but it will suffice.

I remember back when I was young. Murray Head - the poor man's Paul Nicholas, imagine! - did the only useful thing he's done in his actor's bloody actor's life and wrote this song. At the time he emoted the first Jesus Christ (Superstar) in the wretched Timmers and Drew production. He was probably on fifty quid a week while the woosome twosome were on the way to their first few million.

Mr Head was pissed off. 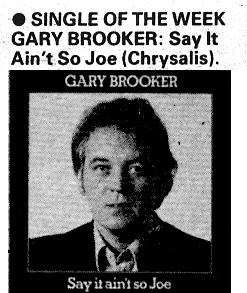 Say It Ain't So Joe sounds like the finest moment for a musical that never was. When I first heard it, I'd just about decided that politics were about the most glamorous and righteous thing on earth - politicans and power and TV following you everywhere, every gesture taken down for posterity. I felt about it the way most rock critics feel about rock. I had my list of heroes: De Gaulle, Bobby Kennedy (you angel you) and his dirty old brother, Boothby, Manny Shinwell, Churchill, Trotsky, Indira Gandhi (and her passive old ancestor), Roosevelt ...

The 'Joe' is obviously Stalin. The anonymous narrator - the wild-eyed Leon T, the passionate idealist on the verge of being cast into the black abyss of exile and assassination? Mrs Stalin, Nadezha Alliluyeva, on the night of her suicide after learning of the misery outside the confines of Moscow? Stalin's daughter Svetlana, prior to escaping to the West and selling her story to the News Of The World (this actually happened)? The flower of the Red Army destroyed as Stalin refused to act and acknowledge Hitler had broken their non-aggression pact while the Krauts smashed towards Leningrad, Kiev, Moscow? ...

A beautiful, beautiful record. I am very selective about the politicians I favour these days, but they still have for me the unimpeachable mystique and loyalty that rock has for my elders. I admit I sometimes try to bend the rules and let politicians get away with the kind of grossness that other critics let their fave rockers get away with. Does this make me more irresponsible, or more realistic, or what?

No More Fear Of Flying rises to #28 on the Our Price Top 60, "London's Original Album Chart".

No More Fear Of Flying drops to #34

And stays at #43 for another week.