Procol Harum: in Bern, 15 January 1977, and on the Something Magic album

I did not quite know what to expect from tonight’s Saturday gig in Bern’s Kursaal. Not having seen the group performing for the last two years I was wondering what kind of song material they would play. Their new record Something Magic had just come out two days ago.

Inside the venue there was a heated discussion going on. Due to the unexpected and sudden demand created in the last minute by concertgoers the venue was not able to meet that with its seated capacity. Agreement was made to remove all the chairs in order to create more room for additional audience. Should this arrangement not be complied with the band would refuse to play. I still see Keith Reid in the entrance arguing with cold blood.

But everything turned out fine. The show started at 8.00. We witnessed a revitalised and tight-fit unit playing very well consisting of Gary Brooker, BJ Wilson, Chris Copping, Mick Grabham and Pete Solley (July 1976 saw a departure and a lateral shift in the group’s lineup, as Alan Cartwright left the band and Chris Copping took over on bass, while Pete Solley joined as keyboard and violin player (formerly with Snafu, founded in 1973 by Bobby Harrison))

The group played with two exceptions nothing but stuff from their own, relying entirely on the extreme wealth of accumulated song material from the last years. Every song from Something Magic was presented, Mick Grabham’s first Procol Harum song The Mark Of The Claw, The Worm And The Tree performed in its full length. Gary was in excellent spirits and translated the lyrics in French. Furthermore he chatted and flirted with the exhilarated audience. Wizard Man came over very strong with a Latin touch. Non-original songs were Eight Days A Week and Jambalaya.

Procol Harum improvised and played extended versions from last records, Nothing But The Truth, Butterfly Boys, Drunk Again, Whisky Train, A Christmas Camel to name but a few. The set was dominated by a professional and highly motivated musicianship. It lasted 3½ hours having an interval of 30 minutes, a concert strategy initiated by the band in mid 1975 allowing themselves to play three-hours-sets.

Leaving the venue I was sure that the future would hold good things in store for this fantastic group but history sadly proved us all wrong. May 1977 would see the demise of one of the world’s best and most influential groups.

A farewell concert at New York’s Academy of Music would take place on May 15th, 1977. And only five months later the band was back together for a one-off performance of A Whiter Shade Of Pale which had taken on a life of its own separate from the group – the song was named joint winner (along with Bohemian Rhapsody) of the Best British Pop Single 1952 – 1977 at the Britannia Awards to mark Queen Elizabeth II’s Silver Jubilee – and the band performed it live at the awards ceremony.

You can’t keep an excellent band down, can you! Beanstalkish regards from Zurich, Switzerland and all the best! 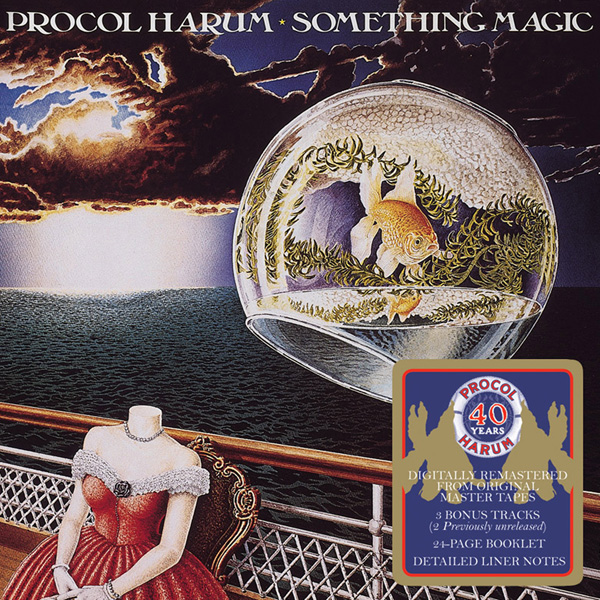 I kind of wonder why this effort – and an effort it was indeed – was treated in what I call a very step-motherly way by the time of its release and even later on.

It would have deserved a much better treatment worldwide. It is an impressive and beautiful album with timeless songs. Compositions like Something Magic, Skating On Thin Ice and Strangers In Space impress by their sheer beauty. Wizard Man is one if not the happiest tune Gary Brooker has ever written. Mark of the Claw, the first Procol song conceived by the excellent Mick Grabham, sounds as interesting and fascinating as it did then. And so does the opus The Worm and the Tree which the group performed live in their entire length in 1977. Who else in these days is able to write such songs any more? Nobody! It’s as simple as that.

When this album was recorded it needed guts to do it. We all remember 1976 and the following years when Punk broke out worldwide. Groups like Led Zeppelin, Genesis, Yes and even The Rolling Stones were classified as Dinosaurs or BOFs. All of a sudden they were faced with dropping ticket and album sales as well as with a growing loss of interest by their audiences. And along comes Procol Harum doing their very own thing. Once again it needed a great deal of courage, perseverance and a declared intention to cut the songs one encounters on this album.

Am I the only one who does not spot one single weak tune on this album? Am I the only one who hopes that in the very near future The Worm and the Tree will be re – recorded in another version with an orchestra? 1977 marked not only the demise of this fantastic group, it was also the year when I saw the group performing live in Bern, January 1977, for a very long time. What a great gig this was!

Anyway I will spread the word – and I already have – what a fantastic record Something Magic is!

Best wishes from Zurich, Switzerland: have a great 2010,