Below, the death announcement the Essex County Standard on 28 January 2020 (thanks, John Twitchett) 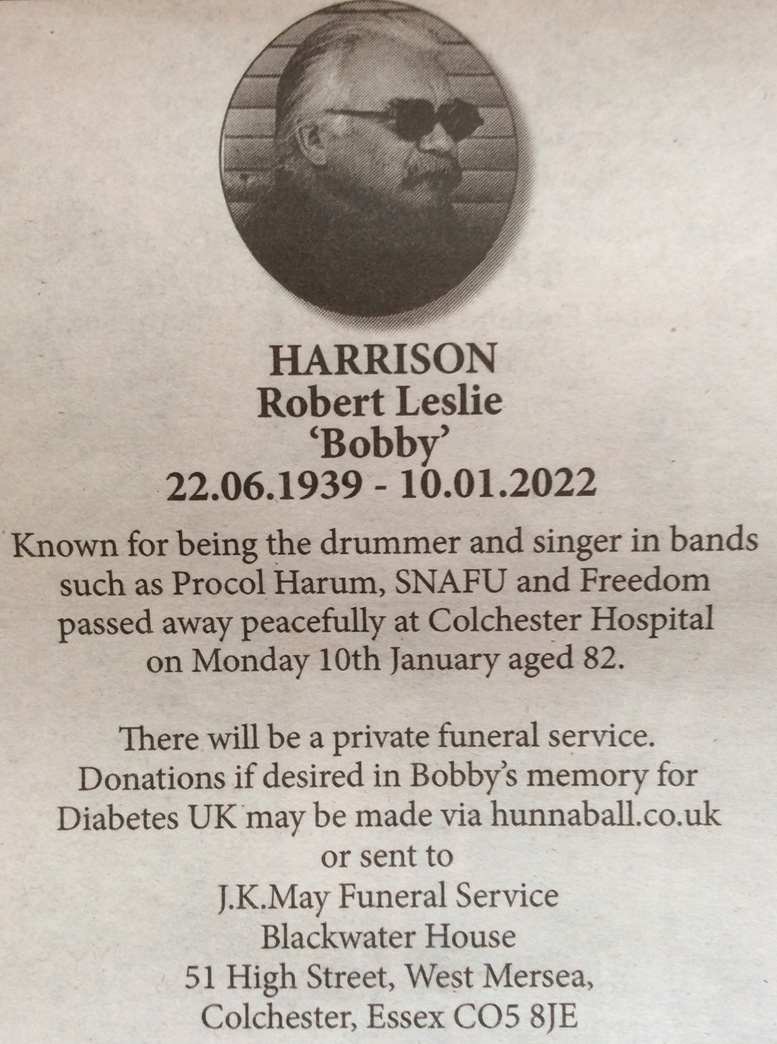 Who played drums on AWSoP? From Q Magazine

Left Procol Harum after AWSoP to form Freedom (review from Record Collector here) with Ray Royer. Was later to join SNAFU alongside, among others, Peter Solley.

In the mid-80s Bobby recorded a solo album, Solid Silver, with the band Mezzoforte in , which has been recently remastered and reissued: review here, related interview here. He now lives in , playing with a pool of local musicians. In April 1998 he became a born-again Christian and was ‘currently hoping to put his musical talents to the service of God’.

In a conversation with BtP in October 2006, Bobby told us that he was playing with a seven-piece band (sometimes including two girl singers) named 'Journey', playing Christian-oriented rock around the Southend area. He's also writing an autobiography that will relate his life and musical career, with plenty about Procol Harum: it is entitled 'Journey to Freedom' and you will find all necessary purchase details at this website.

Bobby Harrison sings backing vocal on 's Journey's End: so Going for a Song, with its explicit lyrical and musical references to AWSoP, is probably the only Procoloid recording we have of Fisher and Harrison performing together, except for Lime Street Blues. The contribution to 'Going for a Song' consists of two phrases only: 'It makes me feel so bad' and 'It really brings me down' ... more detail here

Bar'n'Bus true love story
The drummer with 1960s band Procol Harum is about to wed a girl he met in Southend's mobile drop-in youth centre, the Bar'n'Bus.

Bobby Harrison, of , , a member of the group when its major hit A Whiter Shade of Pale topped the charts in 1967, will marry Wendy Mitchell on December 28.

Bobby, who became a born again Christian five years ago, has set up a band, the Journey, at .

He said: "The band has been a vision for the last five years or so. I wrote most of the stuff and it's now a working band.

"I left Procol Harum because of the lifestyle in the rock business. There were a lot of Mafia-type agents round in the 1960s and 1970s."

Tunes Music Network on Bobby Harrison
Bobby Harrison's musical legacy with Procol Harum
Harrison and Freedom on film: a page about the Tinto Brass movie, Black on White
Harrison's Funkist album
Sessions list: all non-PH and non-Paramounts records (up to 1986) to which Procol Harum members contributed
Bobby Harrison playing live in August 2009, and in May 2010, and in August 2010 (details here, here and here)