On 8 October 2014, thanks to the generosity of Gary Brooker, fans of BJ Wilson were offered,
by eBay auction, items from the Pearl Ludwig drum kit BJ used in the 1960s / early 70s.

Here they are in pictures: but what happened to them?

In advertising the items, some of which are depicted below ...
kick drum and heads ; tom tom and case ; snare drum and stand ; sizzle cymbal, stand and soft case ; two hi-hats and stand ; thin crash ; variety of heads, mostly used ...
we said they were 'more items of memorabilia than musical instruments'.

Palers' Band percussionist Richard Williams, from the USA, had other ideas however! His acquisition of various items in the eBay sale
– so sadly followed by the unexpected death of his wife, Dixie – led eventually to an ambitious and inspiring renovation project. 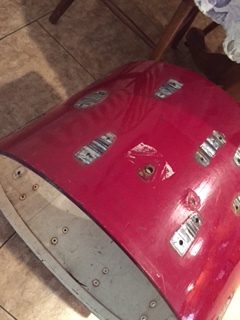 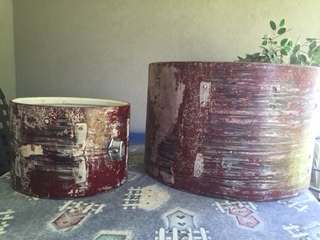 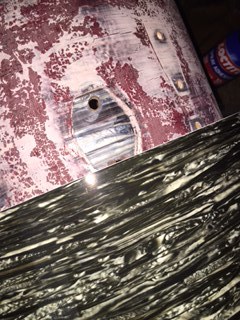 I began working on the bass and tom. The photo is of the bass after I removed the lugs. I had to strip paint off all the bass lugs and tom lugs.
The project is moving ahead. I also have his ride cymbal and stand.
This kit will remain in my possession to my death. One of my deserving sons will inherit the kit.
You will be amazed at this set when I am finished. They will appear new and sound new!
I removed all the lugs from the bass and tom tom. You can see the original black oyster pearl wrap under the paint.
I applied citrus-based paint stripper to remove the maroon paint but it would not all come off.
The black oyster pearl is visible in many areas of the drum shells but not enough of the paint came off to use the original finish. 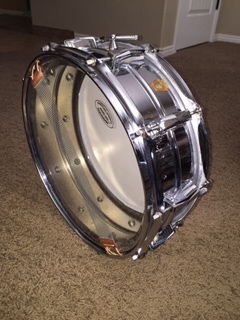 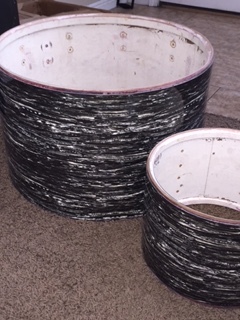 I got the shells stripped and sanded. I bought black oyster pearl wrap. You can see the original wrap through the maroon paint.
The new black oyster pearl is a very close match.
I hope to have the entire kit finished and playable before 8 October, the 25th anniversary of Barrie's passing. 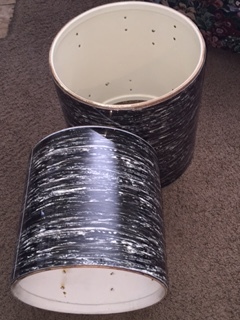 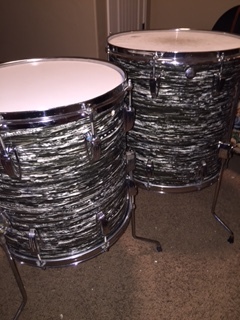 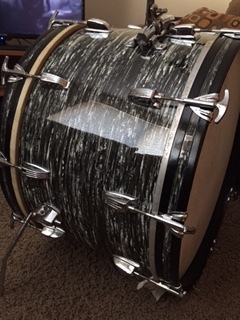 Barrie's Ludwig 14x22 bass and 9x13 tom stripped, sanded and re-wrapped to the original color of choice.
I re used the drum heads sent in the shipment assuming

[correctly!] they had been Barrie's. 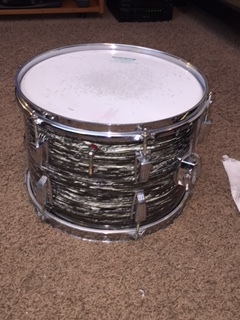 This is the first of the restored drums. It's Barrie's 9x13 ride tom.
I re-used the same heads that were sent with the tom. 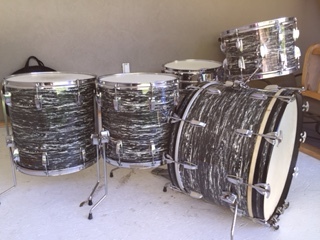 Since no floor toms were available during last year's BtP auction, I searched for keystone badge Ludwig floor toms,
built in Chicago, Illinois, from the mid 60s era.
Found a 16x16 and a 14x14 and re-wrapped them in black oyster pearl
to match Barrie's bass and tom.
Barrie's kit originally was identical to Ringo's (story here) save for the addition of a 14x14 floor tom. 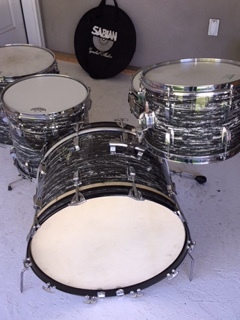 Look lovely, don't you think? They sound lovely as well. 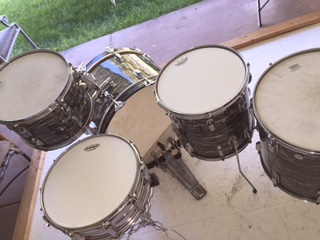 What a LOT of work ! 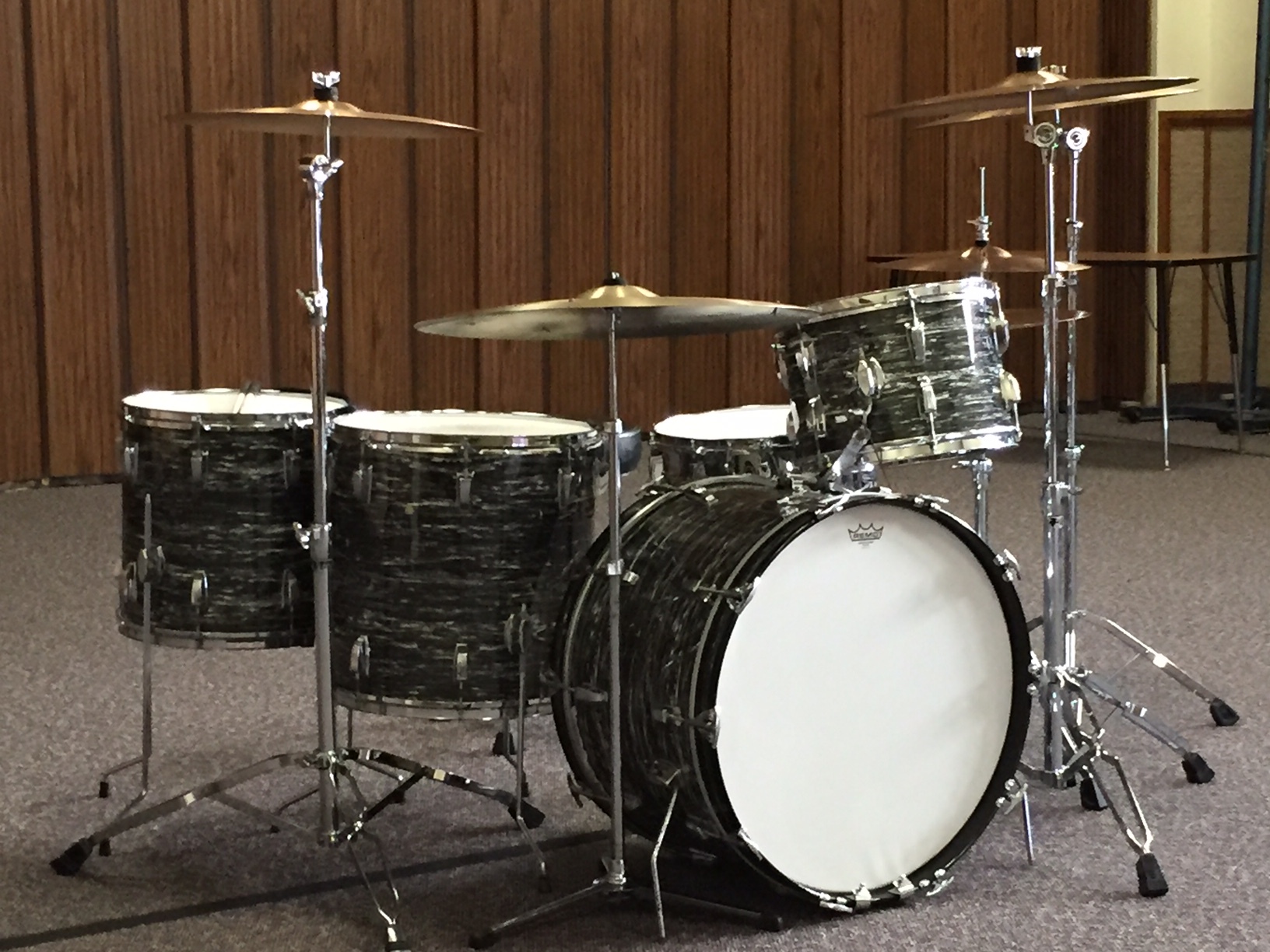 It's alive again! I know there are still some of BJ's licks and fills living in these drums.
Now I'm off to get a stage set so I can play them for anyone to hear!
I obtained the use of a recreation facility and asked a friend to record me playing to Conquistador and Grand Hotel. (click links to see and hear)
Sorry it's not professionally done! I just got the kit finished ... 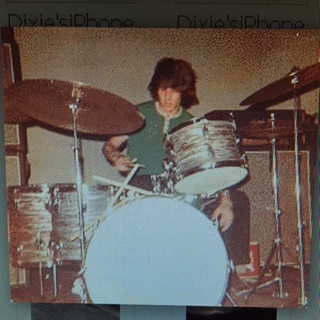 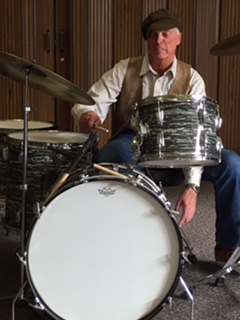 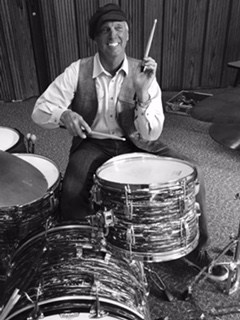 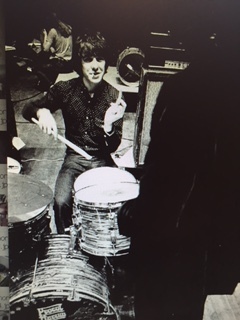 Congratulations Richard on a superb job!