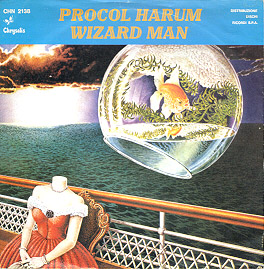 Wizard Man is a genuine curiosity among Procol Harum songs, with its country-pop approach, its chart-hungry hand-claps and 'ooh-ooh-ooh' backings, and its curious release history.

Harmonically it is extremely slight, employing only three chords, the classic I IV V root-position majors that were the lingua franca of the punk bands that were to unhorse Procol in the coming months. Though it's quite a pounding, insistent song in Procol terms, the tempo is actually quite a gentle one, and the key is a genial G. Structurally it is repetitive but not entirely predictable, with its five three-chord verses, three sung, two not; and its vestigial, wordless hook. The playing is tasteful (as is the vocal harmony, which grows verse-by-verse in the manner of the Something Magic vocal) but almost all the instrumental work could be classed as generic filler rather than melodic invention, with the exception of Peter Solley's organ work, which is similar in style and key to that heard live on the unpublished One Eye on the Future (mp3 here). There's a curiously splashed wrong note on the piano in the very final seconds of the fade-out.

BJ was probably referring to Wizard Man when he mentioned to his family that the band was planning to put out 'a country rock single', and Gary Brooker told Chris Welch (Repertoire Liner notes, 2000) that 'you can tell that Eagles were in the studio next door. Their influence filters through.' But in fact the 'country' influence is mild, certainly compared with the unpublished This Old Dog – a relatively elaborate piece with its five chords – which, with its vigorous bluegrass violin, would have been a more engaging, and no less surprising, choice for a single, or even for the 'B' side (which was ultimately to be Backgammon, the other exiled genre-experiment surviving from this session.)

Mick Grabham told Déjà Vu (1977): 'Originally Wizard Man wasn't going to be included because it doesn't fit in with the rest of the album, but then record companies being what they are, said "You've got to put that out as a single", which suited me because I thought that it would have been a hit. As it was, I was totally wrong ... ' Maybe the upbeat, poppy feel of the music slated it for omission: yet the magical allusions in its text do very much cohere with those of the other pieces on the album.

Yet the status of Wizard Man as an album track remains uncertain: it was missing from the test pressing of the Something Magic album and from both the German LP release (Chrysalis 6307 593) and the Spanish release (Chrysalis 28448-1). No European LP release had the track listed on the back cover, and none featured the words. It was announced on the European albums by an intrusive little yellow sticker on the front proclaiming 'contains the hit single', which was a common ploy at this time ... before the single scored its inevitable miss.

Wizard Man was never destined for chart success, but it made good sense as the middle track on side one of the Something Magic album, leavening the complexity of its weightier neighbours. Its place in the recorded repertoire has been subsequently consolidated: it has appeared (still without printed words, except in Japan!) on all CD re-releases (as track three on the Castle one, as a bonus afterthought on the Repertoire version) and featured on Chrysalis compilations (Portfolio in 1988 and The Chrysalis Years 1973-1977 in 1989).

Wizard Man (backed with Backgammon) was released as a UK single (Chrysalis CHS 2138) on 18 February 1977, and has become a collector's item because, unlike most other Procol singles, the release was not mirrored in most other countries. In the USA (CRS 2115) Warner Brothers selected Something Magic for the B side (though their promo copy featured Wizard Man (mono and stereo) on both sides); in Italy (Chrysalis CHN 2138) Backgammon was the B side. The single was scarcely promoted in the UK: the advertisements for Something Magic give it a small mention ('including the new single, Wizard Man') and the 1977 tourbook doesn't refer to it at all. It was contrastingly reviewed ('Laid-back mid-tempo wallpaper, slight appeal in its predictability' said New Musical Express: 'No messin' about here. A straight smash into the kind of song which could well kick the ghost of A Whiter Shade... into the bucket. Just the stuff to rid us of the cynicism which dogs the idea that PH will ever be big again. Their best single in a long time. Chart potential,' said Caroline Coon in Melody Maker, 5 March 1977). It didn't chart: presumably anyone who wanted it already had the album – which Chrysalis or Warners had hoped people would pick up on because of its inclusion.

It was performed regularly on the promotional tours, sounding much like the record, and diffidently promoted by Gary 'We hope it does something.' It has not been heard live since.

'Don't wait for Christmas join a travelling show': is this an instruction to 'get out of town'? The 'travelling show' could in a sense portray the touring rock band: once musicians acquire sound and light technicians their entourage begins to resemble the American touring shows of earlier times (as presented in The Band's WS Walcott Medicine Show from 1970's Stagefright album)