The title Beyond the Pale was first used musically, to our knowledge, by Keith Reid on Exotic Birds and Fruit, then adopted by this fan website, and then by Claes Johansen's publishers for his Procol Biography. In each case there's a pun involved: from the Procol perspective it is 'beyond A Whiter Shade of Pale' as well as being 'beyond established borders'; but – bearing in mind the Eastern European flavour of this particular piece of music – it could equally be beyond Catherine the Great's 'Pale' (from Latin palum, a stake or fence-post), that ghetto which helped ferment a great national music of lamentation. In that connection it's also the name of a recording by a fine klezmer band (see here), and of a band playing traditional Irish music.

In fact 'Beyond the Pale' probably makes the UK person-in-the-street think not of the Russian but of the Irish Pale, that district of Ireland where English rule was effective following the 1172 invasion. But the phrase remains particularly ambiguous: it might well mean 'outside our oppressed community' in an Irish mouth, and 'outside our control' in an English one. We may well wonder what it meant to Brooker and Reid.

Keith said, in the liner notes for the Exotic Birds CD, "It's a toasting song to all those in search of something that they will never find. They who continue to look for looking's sake" which sounds as though it sympathises with the 'they' who hope for rescue by the Idol later on the album. Gary acknowledged the lyric's ambiguity when he said (in a 1974 UK interview on Exotic Birds & Fruit) "The words are tremendous to this. A lot of Reid-type questions with no answers. Rhetorical, I suppose you call that. It starts off with 'Who will search for Holy Grail' … immediately you know you’re not down the Portobello Road or anywhere. The chorus I particularly like: 'Who will share this bitter cup …' Reid has got into somebody here." Reid also like the words enough to select them for his book, My Own Choice.

It is interesting to wonder whether Brooker's treatment of these words offers any definite geographical or demographic pointers, either in the musical arrangement or in the vocal performance. Tape-collectors will recall how he croons 'Mammy Blue' over the song's introduction on the Five and Dime bootleg, and the 'Oy ve, Shalom brothers, Shalom!' with which he concludes it on the 1974 KZEW broadcast from Dallas. Is the song intended to sound Jewish, or merely 'ethnic' in some vague sense (at Dallas one of his bandmates shouts 'Olé'!).

Elsewhere it has been suggested that the mood of this piece reflects the band's quasi-Jewish lifetime of oppression following, and notwithstanding, the early revelation that – as Procolers – they were self-evidently a chosen people, apparently endorsed from On High, yet doomed to spend an epoch in exile. Certainly good numbers of their songs deal with themes of exile and alienation, but this started long before they 'fell from grace and hit the ground'. 1967's Homburg, for instance, is said to predate their first single, and overtly deals with self-consciousness about Jewish garb, and was introduced by Gary Brooker in 1992 (see here) as 'a protest against anti-Semitism'.

In October 1999 Gary mentioned to BtP that he'd been aiming for some sort of 'Eastern European feel' in this song, though in concert introductions he has playfully mentioned influences as widespread as Iceland and Japan. 'Bit of an Eastern Bloc one, behind the Iron Curtain, but not Behind the Iron Curtain, Beyond the Pale,' he claimed in Boston (23 March 1974); alternatively 'It comes from up Iceland somewhere, from an Old Nordic folksong,' (Olympia, 1 January 1976), and, interviewed in Discoveries, January 1992, 'It's kind of Eastern European …I guess one of Liszt's pieces is always banging around in my head"

None of these regions' native music really calls for the clashing hammers BJ plays on this track, nor the rasping banjo that Chris Copping played when this number was aired live ('Luckily no-one threw the tomatoes that my banjo-playing deserved!' Chris told BtP); maybe the time needed to tune that difficult instrument explains Brooker's various protracted introductions. In the aforementioned Dallas performance Gary finds time to explain (in bewilderingly erudite detail!) the origin of the phrase 'Pop goes the weasel' while Chris tunes up, and finally announces that he hopes to play this 'Neo-Slavic' number 'before men land on Venus!' …). The song did live on in the band's repertoire when Chris moved over to play bass: but at Liverpool in February 1977, for instance (when it was briefly introduced as being 'about the search for the Holy Grail', and played with exceptionally whimsical rhythmic freedom). Pete Solley's right-hand synths counterfeited not the banjo down-beats, but the interpolating high off-beat jangle that we hear on the record. At Guildford in September 2000, when the performance was dedicated to this website (mp3 here), Matthew Fisher replaced this jangle with a fascinatingly nagging little barrel-organ figure (mp3 here), reclaiming a sense of mystery in a number that has perhaps grown rather familiar. Gary recalled that the studio twangling sound was originally BJ Wilson on mandolin; (he also vouchsafed 'I played guitar on Beyond The Pale' to Contemporary Keyboard, July 1978) Mick Grabham has mentioned bouzoukis in that context; but whatever its origin, that exotic, 'ethnic' effect is further emphasised by the unusual harmonisation of the first four phrases of the vocal melody.

The opening chords, I, V and IV, might seem rock'n'roll standard, but despite the quickly-established minor tonality the V chord is also minor, not major as the dominant usually is. This gives the song its 'Eastern European feel', though Alan Cartwright's oompah bass moves the ambience westward a bit into the territory of a Bavarian drinking-song (the oompah bass distinguished 1974 hit single Mr Soft by Cockney Rebel … but it's a rare feature in 'serious' hits). There's something faintly exotic, to the English ear, in the melody's alternation of wide leaps and semitone steps, but we hear this in lots of Brooker songs (For Liquorice John for example) that don't sound remotely Jewish. Furthermore the guitar playing is standard-issue Grabham, with some very nice fills … indeed the sequence at 1:28 would have stood up as another solo in its own right; the rhythmical quotation (apparently unwitting) from Simple Sister at 2.54 clearly links the piece to the rest of the Procol corpus.

The lurching pause that precedes the 'Who will share …' section seems to recall the characteristic hiatus that marks the theatre songs of Kurt Weill, Jewish of course. In concert Brooker occasionally used these lurching pauses to indulge his fondness for comic accents: On the Five and Dime bootleg he can twice be heard singing a Dietrich-like 'Who vill share', and once 'ziss bitter cup' which also enhances the Germanic feel. The Mannheim concert, 18 January 1976 (dodgily, on German territory, another 'who vill ...' venue) is one of several occasions when Beyond the Pale is introduced as 'one you can join in', despite the rhythmical minefields of the lurching-stops: the stompers are understandably foxed by BJ's 7/8 drum-break, and a sole clapper doggedly persists on the off-beat for most of the first verse. Such community clapping perhaps has European folk-music connotations. Strangely the audience in Vienna six days later (another 'vill'!) negotiates the rhythmic hiatus perfectly. There Gary has asked them '… if we've got any gypsy violinists in the audience … we invite them up to join in this one … from the Serbo-Croats' …

Following those unusual minor dominants (their impact heightened by the sudden transition to a major V chord at 'share'), the Brooker Muse goes on to auto-pilot for a spell, treading a well-worn path round the cycle of fourths (Gary told BtP that bassist Matt Pegg, in rehearsal, had learnt fifty-four Procol songs and had pointed out that Brooker only uses about five harmonic tricks: but Gary thought that this was OK ('that's style, isn't it!') and asserted that he 'always used a different melody over the top'!). 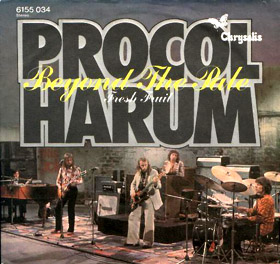 From here on, however, Procol's Beyond the Pale throws the Euro-pop / R'n'B rule-book away to most exciting effect. A path of surprises has already been laid by Barrie Wilson's odd little 7/8 drum-break: now the middle-eight (itself a surprise in a Procol song) announces itself by a bafflingly unpredictable modulation from C minor into A minor, via B and E passing-chords on consecutive beats. This middle-eight seems to have rediscovered the sweet, perhaps naive, Brooker style that we hear at work in Shine on Brightly, A Christmas Camel, the middle of The Thin End of the Wedge and so on, songs where the melody leads the chords, rather than being fitted in over a logically-constructed chordal scaffold. This song has to wrench itself back on-course to join up with the home key again, and this is very ably done when the A minor subdominant, D minor leads naturally into a B flat bar and the 'music-hall' G+ chord before the drum break brings us back into C minor. Yet there's an astonishingly bold key-change up a semitone into C# minor for the final chorus … maybe this was done just to make things as difficult as possible for the hapless banjo player!

/ Fresh Fruit (Chrysalis 6155034) was released as a picture-sleeve single in the Netherlands, where it was also promoted on Dutch TV by Procol Harum. The band visited the Netherlands in November 1974 for a 'Top Pop' appearance, and pictures taken in the studio during that visit can be found on the BBC Live In Concert CD and the re-issued Procol’s Ninth on Repertoire. So much appeal had been packed into three minutes, it must have been a great disappointment that the record didn't set the world alight.

The song was first heard live during the eight-date UK university tour that started on 28 February 1974 at Exeter University. It remained in the setlist through the promotional tours and made occasional appearances until the end of the Old Testament band; as noted above, it re-emerged – bereft of banjoing – for Procol Harum's first gig of the new Millennium at Guildford, September 2000.

Frans Steensma for additional information about this song