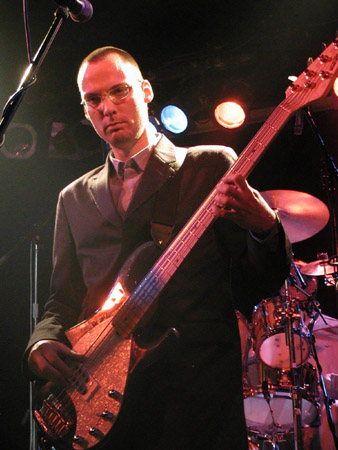 Procol albums: The Well's on Fire, One Eye to the Future, Live in Ledreborg (CD, DVD, download), DVD: Live in Copenhagen,  Spirit of Nøkken, MMX, ... Some Long Road ..., Novum

Previous work
From about 1989 Matt used to play with the band Blinder, in a prog. style not unlike It Bites, whom they supported on tour. When Blinder folded Matt played some It Bites sessions. Through Cropredy Festival connections, and through Dave Pegg's Woodworm Studio, he became involved with Ian Anderson of Jethro Tull, and can be heard on such tracks as Still Loving You Tonight and Rocks On The Road from the Catfish Rising album. Matt could be found helping out with merchandise on the Autumn 1997 Fairport Convention tour. (Thanks to Scott Hunter)

At Shepherds Bush in August 1995 Matt mentioned to guests in the bar that he knew the whole Fairport Convention set (through Fairport's Dave Pegg, his father) but preferred the PH one; he did not know the PH material when he joined the band, having heard only AWSoP and maybe Conquistador. (RC)

Matt drew BtP's attention to this biography of him, which is found at the Aquarian Nation website:

Being the son of Fairport Convention bass player Dave Pegg, Matt started his musical education early and was an eager student.

He began his professional career aged 16 with a band called Blinder who later became the Polygram recording artists, Headswim. Because of their musical ability, Blinder had two very successful support slots with It Bites in the late 80s and it was apparent even then that Matt had something very special to offer the musical world.

Matt’s next role was to stand in for his father on the Jethro Tull world tour: 1993 YouTube clip here. He also played on several Tull studio recordings such as Catfish Rising and became Ian Anderson’s first choice for many years until a move to Australia made it impossible to carry on.

He played bass guitar on Francis Dunnery's second solo album Fearless, showing his range and technical abilities on songs such as King Of The Blues and Home-Grown. This was the beginning of a musical understanding that Francis and Matt share to this day.

He joined Procol Harum in 1993, and once again become the first choice bass player and has been touring consistently around the world for the past 20 years, a position he still holds today.

He hooked up with Francis Dunnery once again in 1999/2000, and played what most people consider to be his best work to date on the CD Man. Of his performance, Francis said, "No one plays my music like Matt, he plays everything exactly as it should be played."

He played bass on Ian Brown's hit CD Music Of The Spheres and after recording he was then asked to perform "live" on several concerts with Ian: he toured extensively with Ian in the early months of 2010. He is a member of the Aquarian Nation Record Company and is always the first choice bass player by all the artists making CDs for the label.

He was asked by Chris Difford to play on his new solo album and once again delivered another fantastic performance. He has also been involved with Stephen Harris’s as-yet unfinished CD Songs From The Mission Of Hope which will be released in early 2003, which contains bass playing reminiscent of a youthful Jaco Pastorius.

He has done countless bass sessions including a solo project from Jethro Tull's Martin Barre; he can be found on a tribute record to John Lee Hooker, and has also played with Andy Fairweather Low, Henry Spinetti and the Hallé Orchestra.

Described by Francis Dunnery as "a reliable and extremely hard working musician", Matt will be recording a Bass solo album sometime in 2003, that is if the rest of Aquarian Nation leave him alone long enough for him to write it!