Encores
All Our Dreams are Sold
Repent Walpurgis 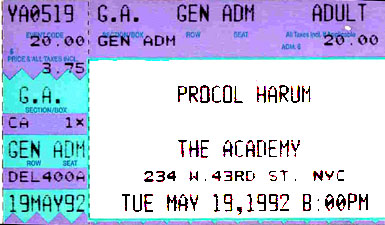 Before Homburg, after mentioning that Procol Harum had visited Poland a few months ago, and apparently getting some comments about his pronunciation, Gary put on his best American accent to say 'POH-LEAND' a few times, and then 'Leech Waleezy', who used to be a shipbuilder, riveting bolts into ships and is now the president; then some comparison of him to Ross Perot (to scattered applause and boos). He then said that while they were in Katowice they had a day off 'and what do you do when you have a day off in Katowice? You go to Auschwitz ...' And then he said that 'this has always been an anti-semitic song in my mind' and went into Homburg.

When they finished, he said that halfway through the song, as he was sitting there singing it, he started to get visions of bald-headed women and men in striped pajamas and realized that he had called Homburg an anti-semitic song. 'Of course it's not an anti-semitic song. It's a protest against anti-semitism. An anti-ANTI-semitic song ...' (applause) '... that's what happens when you have half a Budweiser before you go onstage.'

I remember that Gary played a few bars from the intro to Luskus Delph as a teaser before going into one of the new songs. After All Our Dreams, he announced that this was an important date in PH history ... the 25th anniversary of Lime Street Blues. Also of AWSoP! He said that they only had time for one more song before the hall closed and put it to a vote between Repent Walpurgis and AWSoP, as measured by clapping and noise. Some late stamping put Repent over the edge. However, they then came back for a second encore. GB said the stage manager or hall-owner or whatever said he loved the group and allowed them to play one more song.

Have a look at other set-lists : one from Boston, and another from Chicago, show similarities