PROCOL HARUM was well established as one of the most creative bands of the classic rock era when Broken Barricades was released in July 1971. The music press greeted it favourably and Melody Maker's Mark Plummer wrote: "They are one of the top bands to have emerged from Britain and with Broken Barricades we have another beautiful piece of music." The NME's Ritchie Yorke also enthused: "Broken Barricades is aptly named, because once again they have provided new directions in contemporary music. Procol Harum has broken down the barricades surrounding rock ..." 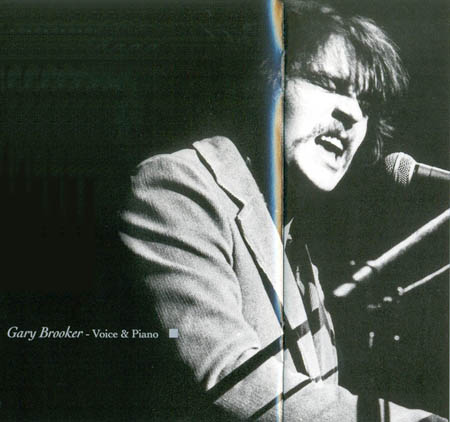 The band came to fame in 1967 with A Whiter Shade Of Pale, a wonderful song that remains one of their defining musical statements. It was the product of a meeting of minds, between singer and pianist Gary Brooker and clever lyricist Keith Reid. They set a precedent with a song that topped the charts and sold millions. It also opened the floodgates to many more great compositions, hit singles and a succession of splendid albums.

During their early years, the group – featuring Brooker's haunting vocals, Matthew Fisher's funky organ, Robin Trower's bluesy guitar and BJ Wilson's solid drumming – produced such works as Shine On Brightly (1968), A Salty Dog (1969) and Home (1970). The latter album marked the end of their contract with EMI's Regal Zonophone label. Their future albums were released on Chrysalis, including Broken Barricades which got to No 32 in America, No 41 in England and No 46 in Germany. The Chris Thomas production also marked the departure of Robin Trower, who went off to form his own highly successful group, featuring a style strongly influenced by his hero, Jimi Hendrix.

Work on Broken Barricades began in February and March 1971, shortly after the group had completed yet another gruelling US tour. The album was recorded at Air Studios in London's Oxford Street, the domain of The Beatles' producer George Martin. It took 35 twelve-hour sessions to complete Barricades, with a line up that included Gary Brooker (piano, vocals), Robin Trower (guitar), Chris Copping (bass guitar, organ) and BJ Wilson (drums). They were all veterans of The Paramounts, the R&B band that Brooker had led back in the early Sixties.

There was all the musical empathy born of long association one might expect in the studio, but there was also tension, partly engendered by Robin Trower's own need for greater space as a guitarist. It's a point that Gary Brooker acknowledges when he reminisces today about Procol's fifth album. "Broken Barricades was actually quite a short album, with only eight tracks. In the old days with vinyl, you were limited to 40 minutes before you started to lose quality. There were a couple of tracks however, like Simple Sister and Song For A Dreamer, that were quite extensive. But instead of our usual ten songs, we ended up with eight. Procol Harum was a four-piece band at this time, although we had not dropped any of our instrumentation. From Home onwards, we used all five instruments, but not all at once. Chris Copping played on a special bass keyboard as well as playing the organ, which was something The Doors also did. We played with The Doors in 1967 and noticed they didn't have a bass player. Terry Reid's band also had the same sort of line up." 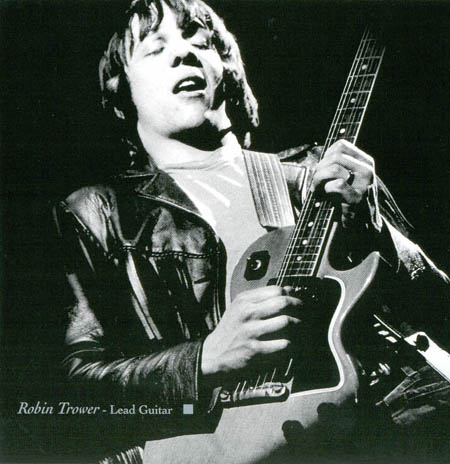 The band got a good sound out of the bass keyboard and if they were playing A Salty Dog or A Whiter Shade Of Pale, where the guitar wasn't so important, then Trower would play bass. By the time they did Broken Barricades, they had developed the idea of moving around on the instruments. Says Gary: "In fact it didn't work that well, ha, ha! Well, it did – but there was a lot of chopping and changing. In the end, the bass / keyboard business didn't really give it the kind of guts we needed. On this album we had become a four piece and the organ had dropped out. Chris Copping mostly played bass and this gave more space for Trower."

The eight original album tracks each have their own significance and Brooker says that the opening Simple Sister was quite an epic. "It has a simple tune and words, although it's quite aggressive. I wrote this for Trower so he had a good riff to play. It became very big in the States. Doesn't mean a bloody thing in England!"

To some ears, the title track might have a revolutionary message. After all, 'To the barricades!' was the cry on 12 May 1588, when the citizens of Paris blocked the streets with barrels of earth (barriques) as they fought the Swiss Guards and forced King Henry III to flee the city.

However, Gary Brooker is not so sure, "Well, I'm not quite sure what that lyric is about. To me, it conjures up a feeling of a ruined planet. Yet, it is more about a personal relationship, if you look into it deeply. I just imagine it as environmental. I don't know why. People talk to me about A Whiter Shade Of Pale and ask 'What does it mean?' It's the same with Broken Barricades'. What does it mean? It can mean whatever you want. So Broken Barricades could be about a personal relationship or it could be about the world falling apart."

Robin Trower contributed three of the tunes on the album and even sang on some. Says Gary warmly: "He wrote a fantastic guitar riff on Memorial Drive and we still play this one in the band now."

The tune was revived when Procol's latter day musicians began jamming on Deep Purple's Smoke On The Water. "I don't even know the number! But it reminded me of Memorial Drive, so I started playing that instead. Everyone else picked up on that, including Geoff Whitehorn, who plays guitar with us now and knows every Procol song. He pitched straight in and it sounded as fresh as in 1971."

Apart from Robin Trower being given space on Broken Barricades, Barry [sic] J Wilson, the band's powerful drummer, also had freedom to express himself. Says Gary: "There are two drum solos on this record, one at the end of Broken Barricades and a full one on Power Failure. This is a real Procol 'touring song' about life on the road."

...Gary describes what happens when the power fails on stage in the middle of a song... 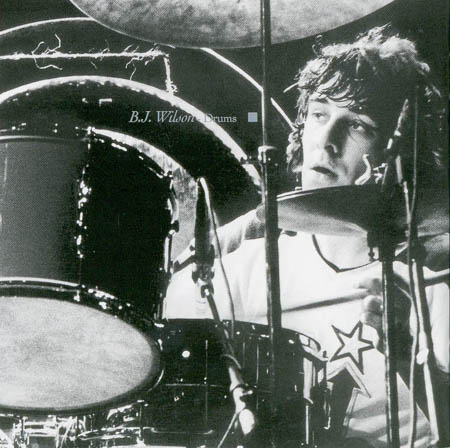 "Being professionals, we know exactly what to do. We don't even think about [sic]. As soon as the electricity goes off, the drummer starts a solo. It's absolutely true. A lot of bands would go 'What's happening?' and walk off. Our drummer just keeps going until the power comes back. We played at the Fillmore East in New York when the power went out. BJ took over and did his solo. He could play for ages. But this time he was getting tired and after fifteen minutes you could see that he had done the 'getting soft and loud again' routine several times. So we went on stage and started gradually taking away pieces of his kit. In the end he was left with one stand, which he played on with his sticks until he faded out. Then everyone went berserk...It was a fantastic solo!"

Song For A Dreamer

is a Robin Trower special. Says Gary: "He was very strongly influenced by the death of Jimi Hendrix in September 1970. We played on the same bill with Jimi in Germany, two weeks before he died in London. I remember standing on the side of the stage with Robin. There were six thousand Germans in the audience and they were booing Jimi Hendrix. He was playing fantastically well, but he wasn't including things like Hey Joe and Purple Haze. He wasn't setting light to his guitar. He just played magnificently and this audience booed him. It was unbelievable and Trower went bloody wild. He was livid. He was totally enthralled with Hendrix' playing, as we all were, and Trower was ready to punch out six thousand Germans! I think Robin changed that day and two weeks later when Jimi died, it really affected him. Song For A Dreamer is about Hendrix. Here was a complete master and yet at this stage in his career, nobody appreciated him." 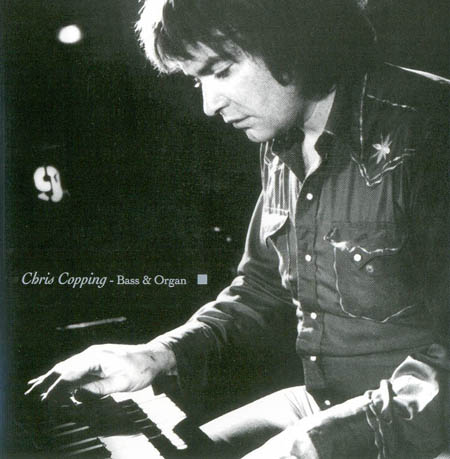 Playmate Of The Mouth

is a play on words. As Gary says: "Don't be dyslexic when you're reading a Procol Harum lyric. I can't remember what this one was about and we never played it 'live'. It was just an idea we had in the studio. Trower had a bit of a blast and we brought in some trombone players from the pub. Poor Mohammed is another piece by Robin and Keith, which Trower sings and has some fantastic bottleneck guitar. I think there must have been some tension between us on this album though, because he left shortly afterwards. We did a tour, but Broken Barricades was his last album with us in the Seventies. Song For A Dreamer was his swansong, because it was all Trower and he continued in that vein with his own group. There's nothing I can put my finger on now about the tension. It was a 'give me space' thing...

Dave Ball, followed by Mick Grabham, replaced Robin Trower. Alan Cartwright joined on bass, which enabled Chris Copping to concentrate on organ. It was this line up that performed the group's next effort In Concert With The Edmonton Symphony Orchestra (1972), one of Procol's most successful albums. Next came Grand Hotel (1973), Exotic Birds and Fruit (1974), Procol's Ninth (1975) and Something Magic (1977).

Procol Harum broke up in 1977 but reformed in 1991 with Gary Brooker, Robin Trower, Matthew Fisher and former Big Country drummer Mark Brzezicki, standing in for the late BJ Wilson who died in 1989. Keith Reid wrote the lyrics for their well received come back album The Prodigal Stranger. This version of Procol toured the US tour in September that year and Procol remain a popular touring band well into the 21st century, with Gary still at the helm, Matthew Fisher on organ and Geoff Whitehorn on guitar. They are still breaking down the barricades of music, blending the many different facets of rock, soul and the classics in that remarkable phenomenon called Procol Harum.