Bobby Harrison talks to 'Beyond the Pale'

Late in 1998 Beyond the Pale contacted Procol Harum's original drummer, to ask him for some background to his 1986 solo album, Solid Silver.

BtP
I've been listening to Solid Silver. How do you feel about that record now?

BH
It was actually done as a promotional thing, so I wanted it live, with a very live feel. And very sort of bluesy because I was the only one up there [Iceland] who could sing blues.

Would you agree that the art-work looks a bit antiseptic, in a way, for a British buyer, a bit clean and cold for a blues album?

Well it is, yeah, I know: but you know that's what they do up there, and I don't think I was in control of it, really. As far as I can remember it was the record company, I suppose. It was done as a promotional type album, in fact. That actual album only took us sixty hours to do from start to finish.

Blimey. Hence the live feel ... presumably a lot of it really is live! There's some splendid soloists in that band: I 'd like to hear them play now.

I first met them when they were eighteen years old in a garage, and I couldn't believe how brilliant they were.

What's their average age on the album, do you think?

You're talking about 22, as an average age. I've always mixed with people a generation younger than myself. Always. At the moment I'm 59 but I feel 49, you know. And I'm still playing with youngsters, and what I do basically is hand over a lot of information to them, my experience.

That's how music develops, I guess. What are Mezzoforte doing these days? 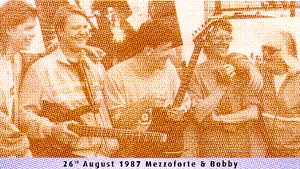 They're all session men now: I think two of them are over here: Gunnlaugur Briem the drummer ... and the co-writer with me on most of the songs was Frizzy, we used to call him, the guitarist Fridrik Karlsson: he played with Shakatak. He's now doing Andrew Whatever-His-Name-Is who writes all the shows, he's working for him now doing some of his shows. Very, very good musician.

You know Mezzoforte had a hit in England called Garden Party? It was an instrumental: first Icelandic band to have a hit!

Oh I talk to everyone in English up there. They all know English, three four and five languages. They're a highly intelligent people. I suppose ... about forty percent I can manage ... I could get away with it. I've got two daughters and a son out there, still of course.

They've got one circuit, really; and once you've done that circuit you just keep repeating it. I'd done everything I had to do up there, musically.

I read that Reykjavik's got the biggest discotheques in Europe.

It's crazy, it's stupid. I hate disco.

You manage to avoid that sound pretty well on most of Solid Silver, I'd say.

Well I was different. My following was different, and I was well-known for the blues, and people used to come along and see me as a blues singer, and singing blues because there was noone else up there who could do it. I mean (laughs) Björk couldn't do it!

She hasn't stayed over there, has she!

No-one apparently likes her over there, any more!

Nothing she does seems to follow on from the last thing: I certainly couldn't make any overall judgment about liking her music or not. I see Matthew Fisher gets a credit on this album: which is the track that he remixed?

Matthew? I love Matthew. He's easy to work with. I mean, he gets what he wants. He knows what he wants, whatever sound, he gets it. Him and Mike Lease, both of them are both more or less the best keyboard players I've ever played with. Got great feel, he has. I'm waiting to hear what you think of him in Freedom.

Are the Freedom records coming out on Angel Air?

There's one coming out in January, I believe: it's called Black on White and it's actually film music from a Dino de Laurentis film, written by the band, all four of us: Ray Royer, myself, Steve Shirley and Mike Lease.

Is Lease still around?

Great keyboard player. Good friend. We've been talking a lot because of this album: he's remixed it all and done everything to it, so it's very good stuff. Sounds a lot like Traffic. Steve Shirley on the other hand sounds a lot like Gary Brooker. Claes Johansen says it sounds like a Procol Harum album. It was done in Italy, came out for a short period of time over there  it was like a 'blue' film, and then it got shelved or something. And then the tax people were after Dino de Laurentis, and he had to skive off to America, and he left all his tapes and things behind, and hence that's where Freedom was.

And that's the name of the film too?

Black on White, yeah. Attraction, too, I think it was called. Either one of those two names.

The opposite of Separation, then, the film Procol Harum were doing at the same sort of time. What other work have you done with Matthew Fisher?

Yes: I done a solo album with Mick Moody, that's how Snafu started off, and Mathew was producing me.

That's Funkist, then. With Ian Paice on drums?

Ian Paice was on it, Tony Iommi from Black Sabbath. Who else was there? Henry McCullough. It's a sort of American style funk, and it's R&B: it's very heavy, yeah.

Are we going to see that on Angel Air?

Unfortunately I think it's Capitol who owns the rights, and they're probably going to want a lot of money for it. It's very sad. But that got to No 76 on the Billboard chart, in America.

And that's why they want big money for it?

Probably. But it's never been released anywhere else, apart from America..

And did Solid Silver sell well?

One of the tracks on there went into the charts.

That would be It's Over, I guess?

But that's not a bluesy sort of track ...

No that's more of a ballad, that particular one.

The sleeve note likens you to 'Tom Jones with taste!' Do I remember hearing Jones cover that one?

Well in a loose way ... it wasn't quite covered, but ... (laughs) I had a promotional company in Iceland, Split promotions. And Tom Jones was over there on tour, and he was given my album and told to listen to it, with a view to covering It's Over. Well he didn't, but he should have done. A bit later he had a hit single, went to Number 4, I think, and I listened to it and ... well I want to say all of this tongue in cheek, okay ... I could have sworn I was hearing my lyrics and a bit of my chorus. But I haven't done anything about it: I was advised not to.

You produce a very nice cultured voice on that track. Have you had lessons of any kind?

No I haven't had lessons, no. It's just natural, purely natural. I was singing when I was very young, I wanted to always sing, I think I started when I was about sixteen.

So ... musical background in the family?

No (reflective) no-one: the only one that had any musical ability was my grandfather, as far as I remember: played a squeeze-box. And that was it really. I'm the only one in the family who has become a professional musician.

Do you play anything apart from drums?

I play a little bit of blues harp. I'm still a baby at that, but I do like playing blues harp.

So the Solid Silver co-writing credits: how does that that work out?

I did melodies and words; Frizzy did the chords.

And who are you playing with at the moment?

I've got two or three or four musicians that I use. I've got a guitar player called Mike Caswell, who was with the late Cozy Powell; I'm playing with him quite a bit, another Christian guitarist called Johnny Sharpe, and a bass-player ... his nickname's Holy Joe, I don't know what his last name is: Gary is his first name. I think he's played with the Feelgoods. Did I tell you I'm a born-again Christian? Since April this year.

What were you before?

Oh, I don't know. Walking in darkness, really. But the plan is now, to put my music to the service of God.

You're over in Southend, now?

Yes, that's right. And I've got a pool of musicians, and I'm based here. I get all my own work and whatever I need: I phone them up and book them as session musicians. There's quite a bit of work in this area.

The Thames Delta: still the cradle of the Blues!

And you get a lot of trad bands round here, trad jazz. Where do you live then?

I'm calling you from Bristol.

Really? Sun Life is down there, isn't it? I've got some money in Sun Life.

Wish I had! Thanks, Bobby.

Bobby Harrison's page at 'Beyond the Pale'