Andrew Slim writes to BtP (June 2002): 'Having visited the web-site almost daily for the past year (and looking forward to Bramhall tomorrow), I decided that I ought to see if I could find my diaries and locate some dates of past concerts'.

Saturday 16 January 1971; I went to Manchester University where Procol were due to be in concert, but it had been cancelled due to Robin Trower's illness.

Friday 3 March 1972; Procol played Salford University. I remember that it was a concert-cum-disco with a couple of other bands (Victor Brox Blues Train?? and another with a name like Iron Maiden). Procol didn't come on stage until just before midnight and did an excellent set which finished just after 1.00 am. 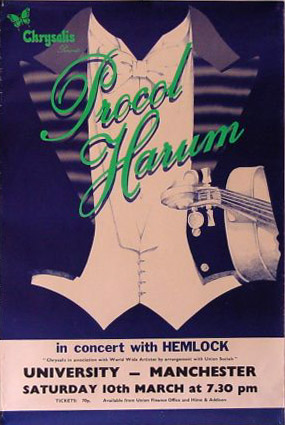 Saturday 10 March 1973; at the Students' Union at Manchester University, where I was in my final year. I had bought the newly-released Grand Hotel a couple of days earlier, and loved it. There was a break in proceedings after the support act had played and, needing to use the toilets, I decided to avoid the queues and, using local knowledge, headed to the toilets on an upstairs floor; these were virtually empty.

I was doing what I had gone to do when someone else came in; it was Gary Brooker. I complimented him on the new album, to which he responded "Oh, thanks! Is it out then?" According to my diary, the band played from 10.20 pm to 11.45 pm. I recall that it was the first time that I'd ever heard the third verse of AWSoP. Afterwards, my great friend Chris (who is heading off to Bramhall with me tomorrow) bumped into Keith Reid and had a chat.

Wednesday 23 February 1977; I was at Liverpool University for the excellent concert, when we got a full two hours from the band. I've seen the set-list on the web site, and it brought back great memories of my second most favourite Procol concert (after Manchester 2001).

Thursday 24 February 1977; Procol played the 'Apollo' at Ardwick in Manchester. A bit of a disappointment after the previous night; a smaller audience in a bigger venue didn't help, but still an excellent concert. The band were on stage from 9.00 pm until 10.45pm.

I hope that these snippets add a little to the collective memory-bank and jog some other brain cells.