Not many Procol fans have had the pleasure of seeing Gary Brooker play guitar on stage ... he used to produce a National for Souvenir of London with Procol Harum, and of course he's played various guitars, mostly acoustic, on stage with No Stiletto Shoes. On the 1974 Procol tour, however, he used to play electric guitar on Monsieur R Monde, and was occasionally announce (it was the heyday of once-popular Gary Glitter, of course) as 'Gary Gold'. [To find out who played the piano on these occasions, read the account of A Dream in Ev'ry Home on this page]

At last, a picture has come to light of Gary Gold in action, kindly sent to BtP by Claes Valentin Jensen. It comes from a newspaper review of the Procol gig that took place at Randers, in Denmark, on 10 October 1974. 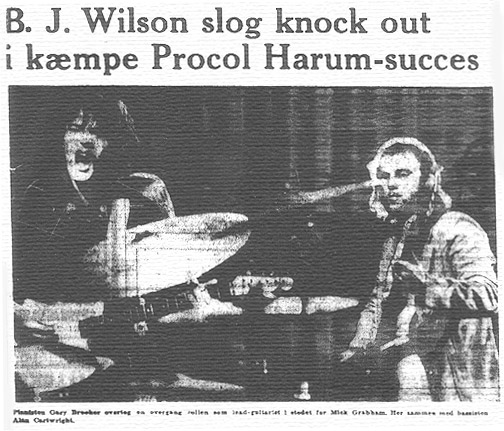 It's not clear where Gary is standing in relation to the drum kit, whether in front or behind. The thing that looks like surf-board under his left arm is presumably a cymbal. Claes has tried, in vain, to secure a fresh print from the picture-desk in question, so we shall have to be content with a scan of his own, timeworn newsprint.

The caption reads 'Pianist Gary Brooker took over the head role as lead guitarist instead of Mick Grabham: here together with bass player Alan Cartwright