Greg Panfile introduced himself on the Procol Harum mail-list on 9 Dec 1997 with these words:

"Hello fellow Harumites, this is my obligatory entry speech. I am five years younger than the musicians and a fan since the late Sixties. Also a songwriter / musician whose other favorites are the poppish Beatles and Brian Wilson / Beach Boys, the folkish Fairport Convention / Richard Thompson / Sandy Denny."

Since that time Greg has unleashed his Resolution collection, which was well-received by Palers, and astonishingly he has now squeezed another magnum opus into the space before the next millennium as well. 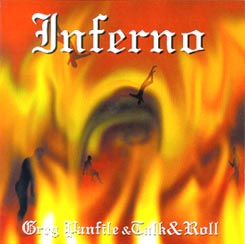 Panfile's work is not merely musical, not merely attractive, not merely literary, though it possesses all these qualities in spades. It's also unfashionably moral - not without a lashing or two of self-criticism - in a way that transcends the occasional naiveties of his musical mentor John Lennon. Note that Greg came on the Procol line within hours of the anniversary of Lennon's death, which, like BJ's, always registers in the mental calendar of the most ardent fans; with any luck BtP will publish this Inferno page on 8 December as well.

Of course Lennon is not the only writer that this collection echoes: imagery of the SoB era Reid comes to mind, and Panfile's moral muscle is also shared with the sterner side of Richard Thompson. But, lest this makes the whole album sound intimidating, let me say that it's just the opposite: it has a feel of great spontaneity and almost artless 'liveness' - indeed a lot of it was recorded live, and very fast: another Thompson quality!

If Resolution promised to lay the confusions of the Twentieth century to rest, Inferno investigates one man's internal contumely and ... I think ... comes to some sort of an accommodation with it. It sounds like Hamlet, I know, yet this is existential angst seen through the eyes and ears of rock'n'roll (the first track lecherously leers at a girl bending over, revealing 'two big reasons' to 'forget about logic and morals and pride' ('a problem comes up, and I have to sit down': as smutty as you like, in fact). So how did this curious synthesis come about? In Greg's own words,

"This all began in 1977 when a theater group called the Cambridge Ensemble planned to stage Dante's Inferno. Greg Panfile was composer in residence at the time, and started writing songs, then an actor quit and the project was deferred. The theater group broke up, and Greg soldiered on alone until 1983 attempting to finish and demo a stage version. In 1994, five years after returning to songwriting, Greg began to reconsider the project. Dialog with Pepe during the Resolution sessions led to discussing the possibility of attacking the project again, and some demos were generated in late 1997 and early 1998. Lyrics finally arrived in the spring of 1999, and David Brown and Pepe became the core of what is now tentatively called Talk and Roll. The concept is that hell is right here on earth, along with the means to escape it. This approach leverages prior work by Hakim Sanai, Dante Alighieri, Idries Shah, and others ... in the author's mind only, of course ;-) "

One great thing about this set is that the playing is exceptional, far far better than one could possibly expect from what is in essence a 'hobby' record, without studio money behind it. A glance at the players' pedigrees helps to explain this:

Jackie Chambers is the stand-out voice on several of the cuts (as well as participating in some of the pre-song banter, which, oddly, gets its own banding on the CD, so that I couldn't figure whether it contained eleven, twelve or thirteen works. Don't worry: I don't care!) and she sounds appropriately like an angel, especially on the miraculous and tender penultimate Nothing Like A Rose: this wholly live track has a lovely Jewish flavour, oddly not at odds with its transcendental Shakespearean libretto, whose sensuality is a lovely and welcome contrast with the schoolboy smirks of the opener.

I'm not sure I actually like all the vocal work by Ed Scheer, whose singing conveys a rather brazen quality to these UK ears: but he too has some glorious moments, as in Oh How I Love You ('A love song to God and my late mother, or a sneaky look at the disabling effects of emotion'). But it may be that one of the underlying structures of the collection obliges the male voice to sing some of the less-appetising lyrics, which Scheer does with apt gusto.

There's a real Salty Dog'sworth of musical range on the album: Latino feel (the insanely catchy It's Just Lust in which Panfile's recreational rhyming reaches Cole Porter proportions (and in which his Beatle credentials emerge in the gratuitous juxtaposition of 'lovely legs' and 'scrambled eggs')); moody, Sting-like voicings (Bloody Murder, with its tawdry violence: 'Near the dead petunias stray dogs sniff the trash'); mature Lennonism (I Don't Know Why whisks me back to 1975, listening to #9 Dream blast from a friend's car in the road in the sun, and thinking it unsurpassable): folksy stuff, Oriental stuff, a bit of Prog, and joyous early Beatlishness (listen to the riff that introduces the searching Rationalise!) ...

But though this is a record one would like to write a lot about, I'm aware that to do so is to risk spoiling the voyage of exploration that listening to it afresh entails. This is poppy music from what sounds like a tormented soul, one for whom a moral framework is obligatory, yet for whom the ready-mades of convention don't seem to suffice. Whether this is sleight-of-auteur or not, I don't want to speculate: certainly it's not trying to convert us in any way. It really is a concept album, not a manifesto: just listen to the intricate tone of the self-loathing She Comes with Instructions, in which the virtues of the cyber-surrogate partner include the fact that she's 'immune to my disease'! Hilarious, alarming, and gruesomely declaimed, with a great guitar solo ... what more do you want?

The final track hints that Greg's journey through the various dark circles of contemporary, existential hell has been a cathartic one. Maybe We Can Find Tomorrow is daringly, brightly touching (significantly, composition began on 9 December 1980) from its electric-piano-and-organ intro to its floating female vocal: 'maybe we can find tomorrow a brighter day, with no more words of harm and sorrow to blind our way'. Panfile's achievement is to move outward from a consideration of a personal hero's death to something (even) more universal. Like many other tracks on this record, this is the sort of thing you excerpt, to put on a compilation-tape to cheer an ailing friend.

This album here could affect so many people so deeply, it astonishes me that Greg is not signed to some major label. When it looks as though the great Robbie Williams is likely to be voted Artist of the Millennium by discerning pop fans, why is Panfile not likely even to feature in the top five? But it's not too late to add this album to your Christmas shopping list, and to add yourself to the Panfile Fanpile. I am satisfied with this music; it really is fine stuff. You believe me, don't you? Good. I will stop repeating myself.

You can also order Panfile's Inferno from Amazon USA