Or: the Day the Hippies Met the Band

I had been introduced to Procol Harum on record by a musical acquaintance in the Home album era, with Matthew Fisher gone but Robin Trower still an integral, even growing, part of the band. I was immediately taken by the dark, pretentious lyrics, the wonderful classical chord progressions with weird, diminished and flatted notes; and of course that strangled-cat blues approach to the guitar leads. As a typical self-important English major and amateur musician / litterateur of the time, this was exactly the band for me, so to speak, given the dissolution of the Beatles and the impending rise of forms I could not readily identify with ... disco, glam rock, and country. At one point I even 'taught' a Modern Poetry seminar on the topic of Keith Reid's lyrics, positioning them among the likes of Allen Ginsberg, Sylvia Plath, and William Carlos Williams ... another tale, to be told another time.

The first concert experience I had of the band took place shortly before the anecdote I am about to relate, at Alexander Hall on the Princeton University campus. This was a wonderful venue for hearing the Harum, small, its Gothic architecture quite congruent with their sonorities and approach. The one disappointment, of course, was discovering that Robin had left the band and been replaced.

Still, it was a great experience. In all the Seventies configurations I ever saw, both Gary and BJ showed up to play and did so in spades, making almost all other considerations moot. Hence when it was announced that the band would appear at a newer venue, a motel near the shore, my associates and I eagerly planned to attend. 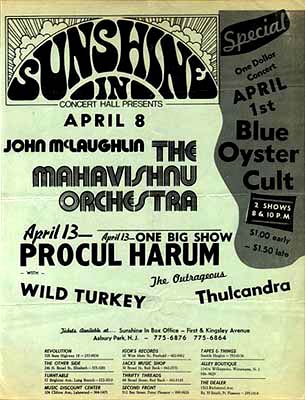 The place was called the Sunshine Inn, although by now it was a bit late for such Aquarian metaphors. We arrived quite early because this concert featured arena seating, and while we were waiting on line to pick up our tickets a most interesting scene began to unfold ... specifically, new guitarist Dave Ball and the road-manager of the time, whose name escapes, were in uffish argument with the local producer, a cigar-chomping penny-pinching fake-tanned toupéed slug of the lowest order ... archetypal of the ilk.

The topic of discussion, with Dave and the manager on the pro side and His Sleaziness on the con, was getting the piano tuned. Herr Wantbucks felt he had fulfilled his contractual agreement by simply providing a piano, and given that this was merely rock and roll and so on, saw no reason to go to the additional expense and difficulty of having said item harmonically healthy, so to speak.

From my nearby perspective, the prospect of a concert with the piano (and therefore the entire band) out of tune was not pleasant to contemplate. Besides that, I wanted to impress people even more then than now, and have never been known to maintain silent dignity and mind my own buzzness in any case.

In the anger of the moment, he quoted shamelessly, up I chimed in support of Dave and the manager, explaining how the piano had to be in concert tune so it would sound right with the Hammond organ, and how we paying fans were entitled to hear the piano in tune because it was the lead singer / songwriter's main instrument etc. etc. Now I don't recall swearing at JP Blorgan calling him any names, but obviously I did something worse, shame him on cheapness ... so he agreed to have the piano tuned (I recall Dave and the manager saying something like 'no tunee, no showee') at the price of excluding me from seeing the show. He directed his minions (presumably named Vinnie, Sal etc.; actually I believe Sal Etcetera really was one of their names) not to let me in under any circumstances. They looked up, and seeing no circumstances, nodded in agreement and grunted in accord, I believe the chord was B minor as said individuals (term used loosely) had no option other than to be minor.

Due to the first-come first-seated festival arrangement and the hardcore nature of my clique, there remained an hour or two till showtime. Of course the entire event now took on an air of tension and uncertainty, especially about my own ability to attend the show. Outside, we smoked joints and speculated, as groupies down from New York, as painted and tarty as humanly possible, drove by in convertibles tooting their horns (in feline anticipation of further tooting of one sort or another, no doubt).

Fortunately around this time, the road manager, (a heftily-built gent in a light brown suede coat, with moustache and long curly hair), assured me I would get in, because the band would let me in by the stage entrance! This was quite exciting overall as you can imagine, so it was agreed that the rest would enter by the front door and hold a place for me, awaiting further developments.

Sure enough, just as the band was about to play, I showed up at the backstage door as agreed, and was ushered in amongst the instruments to join my cronies who of course had staked out the very front and center. I sat and the show was great, especially as it was one of the rare times that Homburg was performed, as the encore.

Afterwards, we hung around to see what might happen, and the road manager stopped by to chat and commiserate over our mutual difficulties with the Commissar of Cash. We offered to share some of the local herb, to which ye manager consented eagerly, and the wafting smell attracted some band members as they came out of takedown mode ...

I recall at that point sitting with Gary and Alan Cartwright at least, perhaps Chris joined in for a hit or two, and indulging in some quite nice hashish and marijuana. The pipe we smoked from was a ceramic piece I had designed and executed myself, later destroyed by an out-of-control dancer in the early disco era ... a metaphor in itself of days to come.

I got to relate the essence of all of the above, and I remember Gary referring to the promoter's flunkies as 'his tomatoes'. We talked about the live show at Edmonton which had been recorded but I believe not yet released, referred to one another as 'an Englishman and a gentleman' or 'an American and a gentleman', and generally got along smashingly. I was able to find out from Gary that Robin Trower's replacement, whom I had briefly met in the lobby, was indeed Dave Ball on what turned out to be, I think, his only tour with the band.

All returned to normal life after that, the band to their groupies and exotic hotel rooms, I to my early-Seventies budget bohemia in central New Jersey. I was later disappointed when Dave was no longer with the group, as I felt his style had a certain sharp recklessness more Troweresque and appropriate than his replacement. Fortunately, one of his better solos still gets airplay on the live Conquistador from Edmonton. Particularly funny was the substitution of Mick Grabham's head on to Dave's body for the Grand Hotel promotional postcard ... I wish I still had that thing, it was hysterical.

My immediate impression, strangely enough, was a vague disappointment, as though I expected these people to somehow be cosmic or enlightened or something other than talented but all-too-human beings. The groupies, the replacement players, the mundane nature of the entire experience and the decompressing return to normal mediocrity, left me somehow less satisfied than I was before. The effort to become somewhat more mainstream in the Grand Hotel era, the lyrics about syphilis and French food, seemed lame and commercial coming from a band that had so daringly plumbed greater depths in the not-too-distant past. Years later, including now, I was able to appreciate that in some way it was my own youthful illusions, based in late-Sixties orgiastic optimism about a changed and enlightened world, that were the primary source of my letdown.

In the early Nineties, I got to see Gary on tour, doing Prodigal Stranger material with a whole new set of players, in the intimate setting of the Paradise in Boston. He put on a great show, sang as well as ever if not better, and still had a Saharan wit that could desiccate an ocean. At some point he commented to the effect that 'The last time I was here, we were all smokin' dope!' Indeed, I remarked to myself, so we were ...

Greg Panfile, author of the memoir above, has been published in various publications including Beatlefan, Excitations, Off the Beatle Track, and the 910 Magazine. Some of his essays are available here; 'Beyond the Pale' briefly reviews his albums Resolution and Inferno: he writes about presenting Keith Reid to his Eng Lit class here.

But was that piano ever tuned?
Carol Bellantoni adds …

The Asbury Park boardwalk is usually pretty 'dead' any time other than high Summer (Bruce Springsteen once referred to it affectionately as "Newark by the Sea"), but there was a good crowd for Procol that night, just the same.

The song I remember most clearly from the gig is Bringing Home the Bacon. I remember it because that was the gig with the duffly-tuned piano. Every time Gary hit the second note on the lead in, it was out of tune! He did not look like a happy bunny, either.

Alexander Hall, on Princeton University's campus, was probably the same tour (but I'm not completely sure). A beautiful place, it's a deconsecrated church that was turned into a concert / theatrical venue (Cat Stevens had played there earlier that same year).

Derek was very excited about Procol playing there, he asked me if that was the Princeton University. This might be selective memory (after nearly 30 years), but I remember them playing In Held 'Twas In I. The vaulted ceilings and stone pillars made an amazing backdrop for Procol.