I was at the 22 April 1972 Ithaca show (my first one, I ashamed to admit). I forgot the name of the opening act but it was, I believe, 2 guys on acoustic guitars whose claim to fame (or infamy) was having written some hit for Tom Jones: I assume they were Mason and Reed, who wrote Delilah. I don't have a ticket stub or photos. Sorry. I could give a shot at reconstructing the setlist from memory, though after 30 years, I don't guarantee its accuracy. [17 years later, we're happy to say, Marvin has located a scan of the ticket-stub, which you'll see on the present page, and also here] 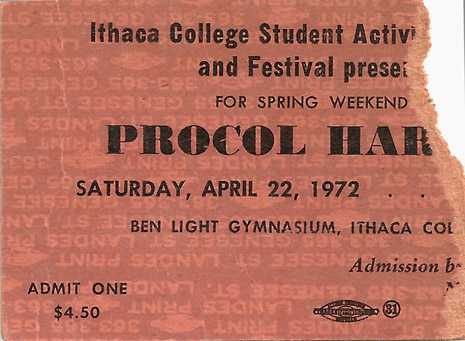 This was probably the show – or one of the shows – that Beverly refers to here: she mentions Mick, but Dave Ball was definitely on guitar. And I don't think Conquistador or the Live album had become hits at that point. Actually, I heard the live version of Conquistador for the first time that day on the car radio of someone who had given me a ride.

However, BJ did grab the mike when they came back for their encore and said something about someone that had cut his hair, though I found it difficult to make out what he was saying. I assume now that he was talking about Procol Hairum as she describes, though at the time I thought he might have been trying to explain that bald spot he had at that era (I know, that sounds terrible).

So I think Beverly had a few shows in mind when she wrote that page.

I was also at the 1 November 1972 gig. This was in Syracuse NY, in an old movie theater. I assume it was Loew's. Their opening acts were Tir-Na-Nog and Steeleye Span. Same thing as above regarding no tickets stubs or photos, but I could see if the setlist resides in the deep recesses of my memory (see Marvin's later memorial reconstruction)

They played in Buffalo NY earlier that year – I believe during March – with Ten Years After but I wasn't able to make it to that one. They also played in Japan with TYA, I believe in May. I wasn't at that one either but I have seen it on videotape.

Index of tour dates at BtP