BtP does not normally announce a Procol gig before contracts are signed with promoters. In this case, however, the promoters are very well known to us (!), and the concert in prospect is something that most of us have only dreamt of.

'Beyond the Pale' already has experience of promoting something of a dream concert: in July 2007 a London audience heard Gary Brooker and Friends ('Procol Rarum') supported by The Palers' Project, featuring Geoff Whitehorn; in the morning we had heard The Palers' Band featuring Dave Ball, and a number from Denmark's Procol Harum Project, from the same stage.

So imagine our surprise to be announcing, in a third European capital city, a triple-length concert headlined by Procol Harum as they now are, 'supported' by a unique tribute band – every one of whose players has performed with Procol Harum at some time in the past. To top even that, in the third part of the show the 17½-minute surprise encore will be played by all the musicians involved: in effect, a double Procol!

We're not in a position to confirm absolutely what the line-up of the 'support' band will be; but we imagine that readers will be happy to guess: and we are offering a pair of tickets for five lucky people who send in the correct line-up (that's ten tickets to give away altogether). Even if the date and place don't suit you (bear in mind that all this music will not be possible without an early start) these will be valuable tickets that you will be able to trade on eBay or give to your nearest and/or dearest – we have absolutely no doubt that there won't even be standing-room at this never-to-be-repeated presentation.

Send your best guess as to the 'support'-band line-up (five names to handle piano/vocal, guitar, Hammond organ, bass, and drums) and all the correct entries received in the next 24 hours will go in the BtP Homburg: five lucky winners will be chosen by an überglamorous assistant. As soon as the line-up is confirmed, we'll let you know who the winners are!

HINT: nobody currently playing in the real Procol will also be playing in the 'tribute' band on the evening. There's a full list of Procolers here, containing all the names you will need.

Click this special link to send your entry (to be fair, please enter only once!)

Many thanks to everyone who submitted suggestions for this nonsensical stellar 'tribute' band farrago. You will all have received an automated response ('Many thanks for your entry, which we are keeping on file until such time as the fantasy line-up is absolutely confirmed. In the meanwhile, make a note of your Receipt Code, which you will find auto-generated in the subject-line of this message: you will need to quote this to claim your pair of tickets, in the event that your entry is one of the five to be pulled from the BtP Homburg') and noted that the 'Receipt Code' ("First Paler Hit") is a clumsy anagram of "April the First", the date on which this page was published.

Although the concert in question is not going to happen, fans' choices were nonetheless interesting: Keith Reid was a surprising choice of pianist/vocalist; Geoff Dunn an illegal choice of drummer. A glance at the diagram below shows that the 'consensus' line-up would be Chris Copping (Hammond), Pete Solley (piano), Dave Ball (guitar), Dave Bronze (bass) and Mark Brzezicki (drums) – we're allotting instrumental duties ourselves, since most people didn't do that; singing duties would have to be shared. We have no doubts that such a line-up would sound pretty magnificent! 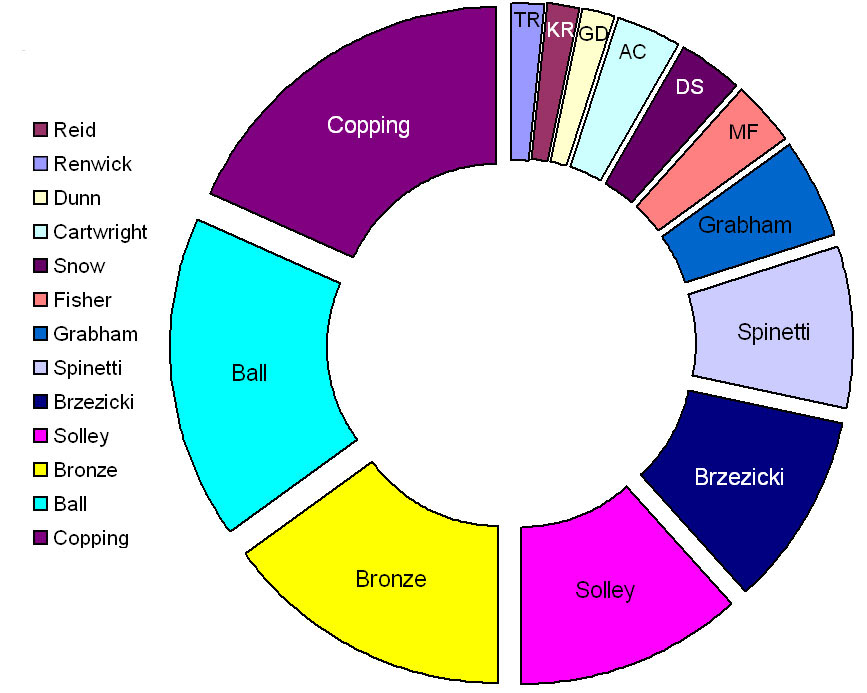 Of course a number of people wrote in exclaiming that they'd spotted that this was an April Fool jape – part of a series that has run, with varying degrees of witlessness, since 'Beyond the Pale' was founded in October 1997 (see foot of page for links). They were right, of course, but the joke is still on them: their 'spoiled votes' were not eligible for the BtP Homburg draw. As it was, we inserted the names of the contributors who chose the 'consensus' line-up, and there was sadly no need to recruit an überglamorous assistant to make the draw, since they were only two in number. Congratulations, then, to Kerry Holloway in the USA and Peter Johnson in the UK: your pairs of tickets will be on its way to you should the venue and date ever be confirmed!