On stage in Germany ... signature pickups ...

Geoff Whitehorn spoke with BtP (2 November 2004) and it was good to catch up with all his musical news.

In particular, he informs us that he will be playing the following gigs with Roger Chapman in December: 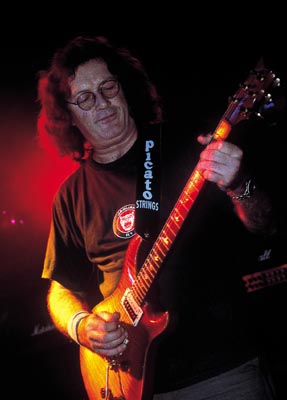 The band consists of Roger Chapman, vox; Micky Moody, guitar (the finest slide player in England, no question); John Lingwood, drums (ex Manfred Mann); Ian Gibbons, keyboards (ex Kinks, Ian Hunter); Gary Twigg, bass (ex Barbara Dickson, Spencer Davis); Andy Hamilton, saxes (from the murky jazz underworld) [parenthetical comments by Geoff]. Although Whitehorn and Moody worked on Roger's first solo album, that is now some time in the past; however, they are both accustomed to working in bands with several solo instruments, so a bit of 'intelligent listening' ensures they won't tread on each other's musical toes. Geoff had not seen Roger Chapman for a while, though they did play together at the Albert Hall on 15 March (the Lord Taverners' gig), and before that they'd talked at Tony Ashton's funeral. It was only about the end of September that Roger called Geoff up to invite him on the present tour.

They've played some UK gigs already – Scotland, Newcastle – and not least the 45th anniversary celebration for Ronnie Scott's club, at London's Barbican. After the German shows, another UK gig ... 22 December, at the Y Theatre in Roger Chapman's hometown, Leicester.

Geoff is using his Variax for the acoustic numbers, and his blue Fret King as seen on the Procol Copenhagen DVD. You may also see him wielding a new Strat (though owning seven Strat-style guitars, he only lately splashed out on the real thing ... a 50th anniversary model). This instrument has been lately equipped with Bare Knuckle pickups – Tim Mills at Bare Knuckle has just brought out 'The Crawler', a signature Geoff Whitehorn pickup ... 'Voiced by Geoff to be equally at home in Les Paul or Strat type guitars, these humbuckers reflect years of experience at the cutting edge of blues rock. Sweet, rich, full bodied tone with power aplenty'.

If you're interested in how these pickups are made, read this article from Guitar Buyer magazine ... very interesting, and it includes a skilful typo: Tim Mills, who runs the company, is described as not only a guitarist but also a 'marshall [sic] arts' instructor

Geoff tells us he hasn't been doing any solo recording lately, barring a few bits and pieces for Marshall shows. He has been recording (by post, as it were) with Elkie Brooks – with whom he played around England in the summer –  and some of that work will appear on her new album. Tim Mills of Bare Knuckle has also played with Elkie ... that is the link with Geoff.

Procol Harum concerts down the years