In its various spellings

'I think it was silly – a silly name'
Adam Dolgins in Rock Names, Pan McMillan 1993

Procol Harum: formed in London in 1967 and are most famous for the hit A Whiter Shade of Pale. In an interview, lyricist Keith Reid, who was always listed as a full-fledged member of the group on their albums, recalls the genesis of their name:

'It's the name of a cat, a Siamese cat. It's the pedigree name, and it belonged to a friend of ours, just somebody that we used to hang out with when we were forming the band. One day, somebody pulled out the cat's birth certificate and said 'Have a look at this', and the name of the cat was Procol Harum. And somebody else, in fact a chap called Guy Stevens who was quite instrumental in Gary [Brooker, the singer and pianist] and myself getting together in the first place, said, 'Oh, you must call the group Procol Harum'. And we just accepted that. We never even questioned it, never even thought if it was a good name, we just went ahead with that suggestion.

Once we put the record out, people started to say, 'Oh, it's Latin, and it means 'beyond these things'. But in fact, we had spelled it incorrectly. It should have been P-R-U-C-U-L, I think, or P-R-U-C-O-L H-A-R-U-M. I believe that's right anyway. If we'd spelled it correctly; it would have meant beyond these things. But s seemed quite apt. That was it really. It was the suggestion of a friend and we just stuck with it.'

Are you glad you chose it?

'No. I think it was silly – a silly name. And the trouble with it is that people have a great deal of difficulty understanding what it is. One of our favourites is Broken Arm. Broken Arm, Purple Horrors ... It's very difficult for people to get the hang of.' [but read Gary Brooker's opinion]

What became of the cat ?

'The cat would now be more than twenty-five years old, so I would guess that it's no longer of this world.'

And who owned this cat?

'It belonged to our dealer. We used to score off of him.'

Thanks to Sam Cameron for sending this to BtP. He notes: 'no source is given for this interview and it contradicts the 'misspelt-when-heard-over-the-'phone' version of the story retailed more recently'. Read Sam's full treatment of this feline subject.

Guy Stevens was not the only svengali of the period to dole out a Latinate name to his protégés. The 'T2' section of The Times (25 October 2002) contained an item about the longevity of Status Quo, from which the following paragraph is excerpted:

"Both Rossi and Parfitt seemed to feel that their lives had just sort of happened. They hadn't even known what 'Status Quo' meant when their manager suggested the name. He offered 'The Muhammad Alis', 'The Queers' or 'Status Quo' said Rossi. And it could have been worse - 'Caveat Emptor' perhaps or 'Quod Erat Demonstrandum' and who knew what 'Procul [sic] Harum' meant, anyway?"

So whose cat was it? 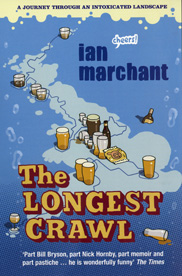 The Longest Crawl, by Ian Marchant, is a newly-published book (2006) describing a month long pub-crawl in Britain. The spelling of the band's name is that of the author. This short extract describes a meeting with someone called Ash in Wales:

In the early sixties, Ash shared a flat with the blues singer Long John Baldry. They used to go busking together up Ladbroke Grove, Baldry singing and playing guitar and Ash handing round the hat. Often, they were accompanied by a young ukulele player known as 'Long Haired Eric' (Eric Clapton) ... Ash passed his pipe and told some more of the stories. 'I had this cat called Procol Harem,' Ash told us. 'A Burmese, a sweetie she was. At this time, '66, '67, I was dealing acid to the beautiful people. Sold it to Hendrix a few times. Gary Brooker was one of my regulars. He played in a group called the Paramounts. He was always around mine. What's your cat called Ash? he asked me. Procol Harem, I said. So they changed the name of the band'.

'But Ash, that's one of the great unsolved mysteries of rock'n'roll,' said Perry.

'Who owned that cat that Procol Harem were named after.'

The Name of the Cat | Is 'Procol Harum' Latin?