These excerpts from New Musical Express, kindly selected for 'Beyond the Pale' by Yan Friis, show the media's growing attempt to make 'personalities' out of the Procol musicians, which some of their 'life-line' replies are evidently sending up. Some of the musical replies, however, are revealingly serious and would later prove sadly ironic: choose your own examples! Gary was to marry 'Franky Brown' the following year, of course. 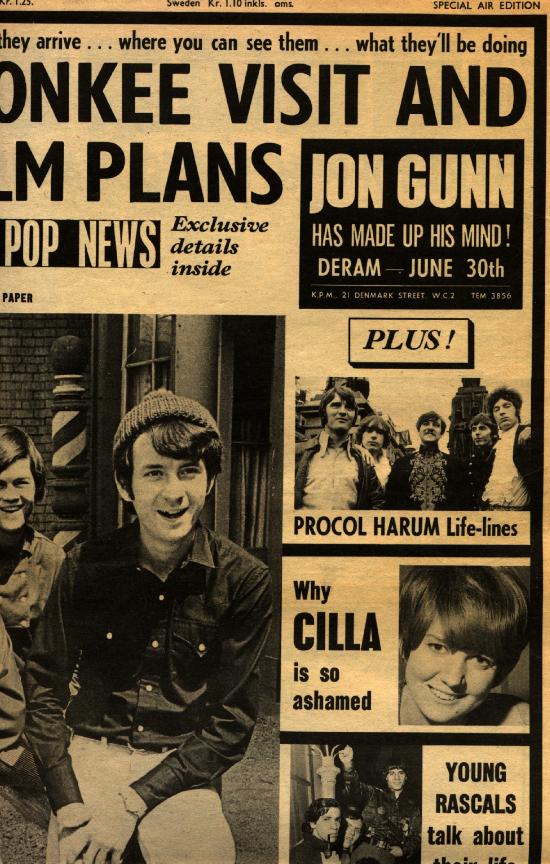 Top 3 in the NME charts:

1 (1) A Whiter Shade Of Pale, Procol Harum
2 (3) There Goes My Everything, Engelbert Humperdinck
3 (2) Silence Is Golden, The Tremeloes

Loussier drops in on Procol Harum (by Jeremy Pascall)

Commented Loussier: 'I like their record and music but their live performance lacks excitement.'

After the performance, which was played to a packed house, the group were dejected by the audience reaction which was appreciative and polite but lacked the explosive element they were expecting.

One reason offered by club manager John Gee was that Monday night's audience was not the usual club scene 'ravers' but out-of-towners paying to see exactly what sort of stuff the current chart-toppers are made of.

When told of Loussier's remarks the boys replied: 'We can only do our best.'

Tailpieces by the Alley Cat

Read more from the first year of Procol press