New stars on the horizon

This is from the October 1967 issue of Hit Parader: a one page write-up on PH under the heading 'New stars on the horizon'. (The other ones are Spanky & Our Gang, Scott McKenzie and the 5th Estate.) The article and picture are a little out-of-date as they include Royer & Harrison: there's a very similar article in one of Yan's NME excerpts here. 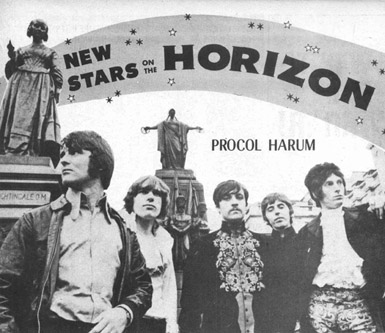 Why not? In pop music today, anything goes, baby. So we have A Whiter Shade of Pale by Procul [sic] Harum at the top of the charts in England, France and America. The imagination boggles at the thought of what will come next.

Procol Harum, whose Latin-derived name means "Beyond These Things", has been together for less than a year although each member of the five-strong outfit have [sic] worked with other groups. The organist, Mathew [sic] Charles Fisher, has been a student of classical organ at the Royal Academy of Music for the past four [sic] years.

Others in the line-up are Ray Royer, lead guitar, Bobby Harrison, drums, Dave Knights, bass guitar and Gary Brooker who plays piano, sings and writes songs like A Whiter Shade of Pale, which he created with manager [?] Keith Reid.

Mathew [sic] Charles Fisher was born March 7, 1946, in Croydon, England. He plays bass guitar, piano and tongs as well as organ. He attended the Guild Hall School of Music and when asked at what age he entered show business, he said "never." He describes his favorite clothes as "moody but magnificent" and his best friend is "my trusty sword." He likes Baroque music and rock and roll.

Gary Brooker, born May 29 1945 has "patch work eyes." He has learned to play piano, organ, trombone, cornet, piano, accordion and Bengal flute. He was born in Hackney and he made his show business debut in 1949 when he was 6 years old on the Hawaiian Serenade radio program. His favorite clothes are "other people's." He would like to master twenty-five instruments and catch a twenty-five pound roach. He listens to Baroque, New Orleans and Dylan music. [the dates don't add up here: see alternate version here]

Ray Royer plays lead guitar and violin. He was born October 8 1945 in the Pinewoods. His favorite musician is jazzman, Albert Ayler, he dislikes "people spitting at me," and he has a pet Bograt.

Dave Knights comes from Islington, where he was born on June 28 1945. He plays guitar and bass. He made his first professional appearance in the Wigan Pier Fantasia. He claims he was once a cowboy, he likes to drink syrup of figs and his taste in clothes is "restrained." He likes smiling, hates frowning and he would like to meet Edward Heath - briefly!

Bobby Harrison plays drums and vibes. He has patch work hair. Born in East Ham on June 28 1943 [sic], he has consistently refused to enter show business. Among his former occupations is "masked crime fighter" and he dresses "snappily sloppy." He would like to remain anonymous or achieve recognition as the mood strikes him. He has two pet tadpoles.

Procol Harum are the hottest group in England this week and soon we shall be able to see them. What more do you want?

Thanks, Marvin for the typewriter torment