These excerpts from New Musical Express, kindly selected for 'Beyond the Pale' by Yan Friis, show Procol Harum closing the Rainbow and playing very occasionally while they record with Leiber and Stoller; meanwhile Mickey Jupp tells his tale.

But what's with the buddy-buddying with Artie Garfunkel? (big pic of Bowie and Garfunkel)

Pub Rock: Would you ask a man to drink and jive? 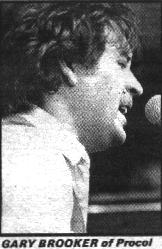 Procol Harum have been added to the bill of the all-star concert at London Rainbow Theatre this Sunday (16), which officially marks the venue's closure. Frankie Miller will guest in Procol's set and play with the band. Another new booking for the show is Welsh band Sassafras, who recently toured Britain with Black Oak Arkansas. But the Jess Roden Band will not now be appearing - and neither will Alvin Lee, because he is out on his own tour (see separate story).

The full bill, in alphabetical order, now reads: Kevin Coyne Band, Hatfield & The North, John Martyn, Frankie Miller, Procol Harum, Sassafras and Richard & Linda Thompson. There will also be surprise guests, and at least two are likely to be big names. The concert runs for at least nine hours, starting at 3 pm. Chrysalis are rushing out a live album of the event, titled Over The Rainbow on April 11.

This is likely to be Procol Harum's one-and-only British appearance for some time. They are currently rehearsing material for a new album, which they start recording at the end of this month. They then have extensive overseas commitments.

Meanwhile, back at the NME Top 5 the rot has set in:

(sorry, just unreadable babbling from the guy, mostly concerning his own ego, just namechecking some singles on the way..)

And then on page 37, full page ad for the Rainbow concert. 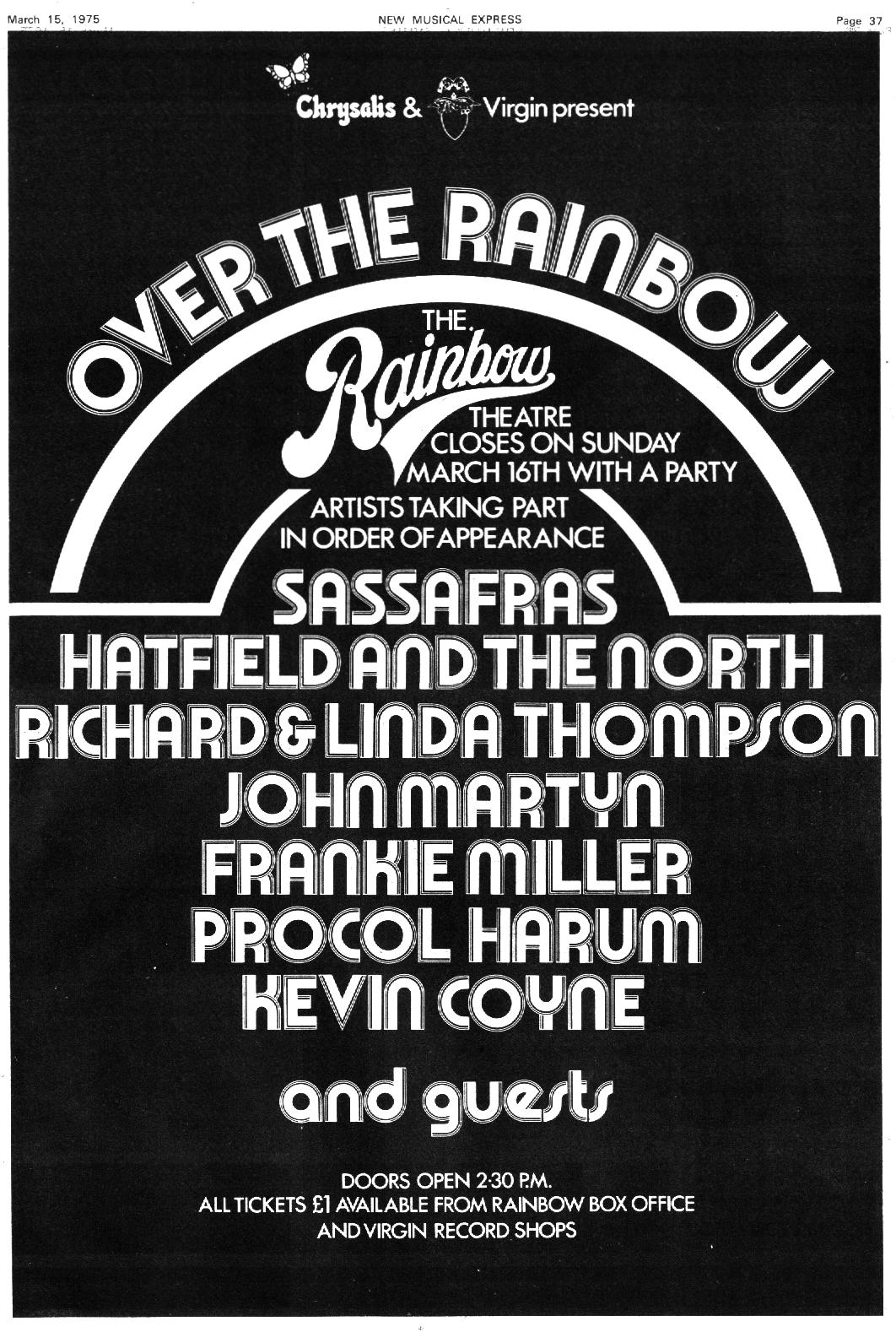 Hey that's no way to say goodbye
As the curtain came down for the last time at the Rainbow, ROY CARR looked on and wept

Except for Procol Harum, who turned in a killer set, both on their own and with Frankie Miller, the remaining acts did nothing more than was expected of them, and one of them didn't even manage that...

(My comment: Roy Carr uses the rest of his "review" trying to kill Kevin Coyne.)

From an interview with Mickey Jupp:

The Lost Legends of Southend Rock
by Max Bell

"...Word got around that I could play and Robin Trower (then in Southend's premier R&B band The Paramounts) said he knew of a group who needed a pianist. So I joined.

"We rehearsed in a place called The Shades, marvellous atmosphere, where the Paramounts played on Sundays. One and six to get in, cokes seven pence. Stupid. Gary Brooker, who was also in The Paramounts, christened us The Orioles, and we moved in Wednesdays doing stuff like Right String Baby But The Wrong Yo-Yo and Brand New Cadillac. One day I said how about Money? and they said 'Right, you're the singer from now on.' That's how I started.

"We weren't good, in fact we were bloody useless, but we lacked confidence. We had a guitarist who was amazing at rehearsals but come a gig he couldn't play through nerves. he had a nervous breakdown and left. After that we got a guitarist (Mo) who I knew at Art College and he was good all the time. When The Paramounts moved out we took over and built up an even larger following ...

...they (Legend) weren't a playing entity until two years after the formation of Procol Harum by Brooker. Jupp meanwhile played in an informal set up known as The Jam with Trower, and Wilko went off to University.

"This could go on for bloody ever. Before The Paramounts there was The Rockerfellers and they were it. Individually not so good but together as tight as that. They split in 1962. End of part one.

"...There was a single National Gas, which Bob Harris used to play when he was on the circuit.

"Anyway nothing more came of it, fine, over. I went back to Bath, not doing anything, and a letter arrives from Robin Trower, who was in Procol Harum with Gary. It said to call him, so I did. Harum's bass player David Knights was leaving them to go into management and, same old bit, wanted a band to go on the road. I said OK but I've got to have Mo Witham on guitar and little Bob Clouter on drums, 'cos I'd always been with them in The Orioles and I was getting a little older and a little fussier. Anyone round here - Wilko... anyone - will tell you Mo's shit hot ... Wilko used to watch him like this (he stares wide eyed and open mouthed). That was Legend two ...

News briefs:
Procol Harum are to play a solitary concert at Eastbourne Congress Theatre tomorrow (Friday), and it is expected to be their only British date until the autumn. the band have now almost completed work on their new album.