These excerpts from New Musical Express, kindly selected for 'Beyond the Pale' by Yan Friis, show Procol Harum releasing a new album, playing a big gig, and attracting grudging praise mixed with hostility from the critics.

Procol Harum have been set for another one-off concert. It is at the Bournemouth Village Bowl (formerly the Hardrock) on June 24. 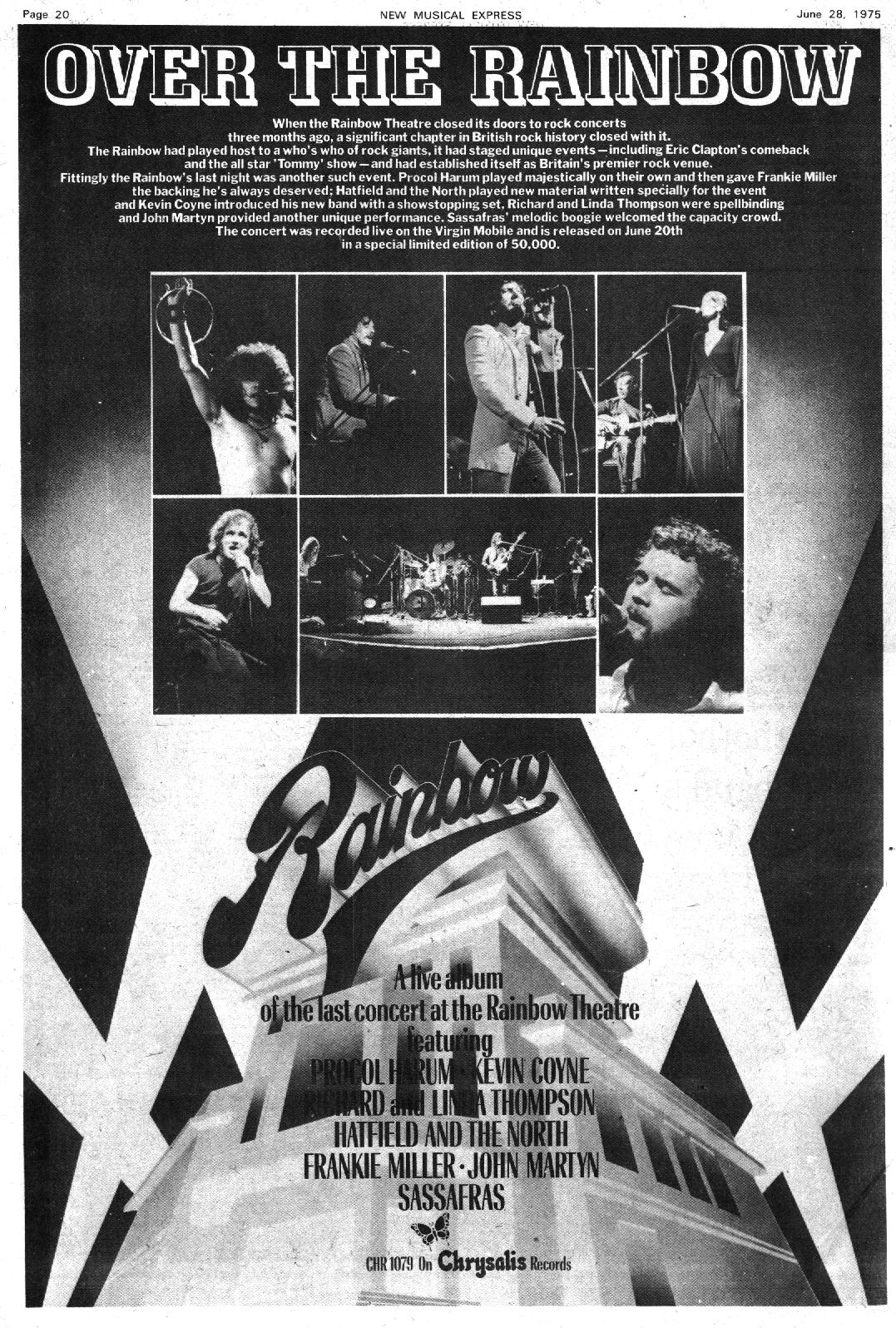 Procol Harum are to headline in concert at the London Palladium on Sunday, August 10. They will be showcasing material from their new album Procol’s Ninth, set for world-wide release on August 1. The Palladium gig will probably be Procol’s last British appearance for the rest of this year. Tickets are now on sale priced from 75 p to £1.75. Subsequently the band will undertake a string of concerts in Europe, followed by a September tour of America.

Half page ad for Procol’s Ninth. 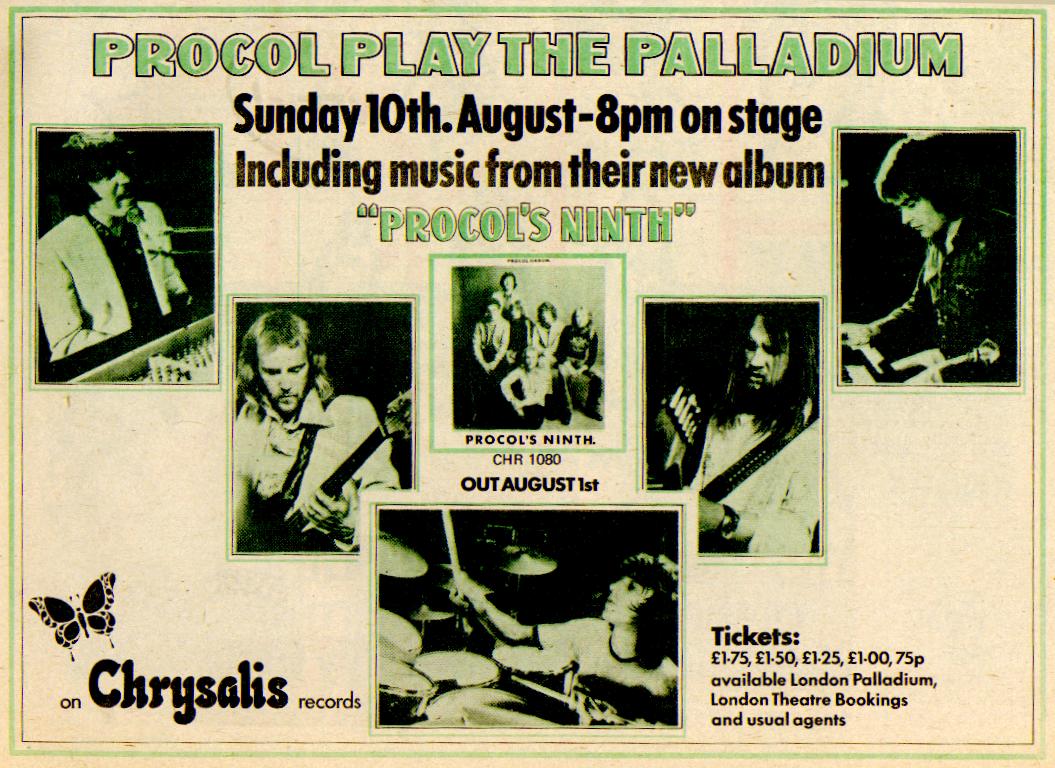 Procol Harum, already set to play the London Palladium this Sunday, will now also appear at Hastings Pier Pavillion this Saturday (9). They will be performing the entire show at both gigs, with no support act, and will play two separate sets.

The horse that Steve Marriott Ate


Pointer Sisters, How Long (Betcha Got A Chick On The Side)
Otis Redding, My Girl / Hard To Handle
The Byrds, Full Circle
James Taylor, How Sweet Is It
Average White Band, If I Ever Lose This Heaven

Procol – forward into the 60s

Procol Harum should have made this album seven years ago.

It sounds very much like a 60s release. Quite why the band decided to do this escapes me, at present. On many of the tracks, there's either a technique of production, perhaps a snatch of organ, or even a guitar line that’s reminiscent of those times – but quite why Procol should have decided to try for this kind of sound escapes me. Though, of course, during the 60s, Procol were in full commercial flight, and arguably one of the bands around.

Things, of course, have slipped since then. 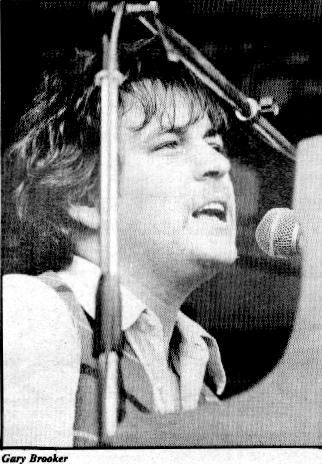 The inclusion of Lennon and McCartney’s Eight Days A Week (set at a slower pace) and Leiber and Stoller’s rather good rock song, I Keep Forgetting also help create the atmosphere of a decade ago.

But even several of Procol’s own compositions, particularly The Unquiet Zone, Typewriter Torment and The Final Thrust (my own favourite) project similar aura.

Because the band seems to have found a more positive direction from this particular source of inspiration, however, they have almost managed to move away from the major musical themes which dominated so much of their recorded work.

echoes the thematic structure of, say, Whaling Stories, and it is the only track that recalls their earlier work [all sic!].

But the change in composition style has not altered the playing style to an unrecognisable degree, even though Jerry Leiber and Mike Stoller’s production has brought out various facets to a greater extent than previously, occasionally detrimentally.

For instance, the vocals of Gary Brooker and his piano playing are predominant throughout the set, and great care has been taken to ensure he continually sounds at his absolute best in both areas.

This means the use of echo on his voice to make it appear he’s hitting the higher notes – which is a device Procol have used in the past. A Whiter Shade Of Pale being one of the earliest illustrations of this.

More innovatory though is the power of the rhythm tracks, and the reliance on drummer BJ Wilson and bassist Alan Cartwright to carry through several numbers (particularly on the second side). And when aligned to the regular guitar fills and excellent lead work of Mick Grabham this is most certainly revealed as a tonal quality which hasn’t been exploited well previously.

The unfortunate repercussion is that Chris Copping’s appearances astride his organ are too seldom [sic], and the instrument lacks its usual bite (witness Typewriter Torment).

Secondly the synthesised strings used at various junctures are weak and virtually made redundant by the production – so removing that symphonic quality so often prevalent in the band’s overall sound.

And this is a dangerous game, as quite a lot of Procol’s appeal lies in these very two characteristics.

Nonetheless the album is good on a musical level, with such pieces as Fool’s Gold ample evidence that their new approach can succeed. The only real, significant blemishes (apart from Keith Reid’s words see below) come with the lethargic The Piper’s Tune, and the cacophonous instrumentation of Torment.

The lyrics, however, are a different bucket of whale bait.

It’s be easier if I just say the humour on Torment is good (even though no Souvenir Of London as it was obviously intended), and both Pandora’s Box and Taking The Time work in their own way.

The other five sets of lyrics leave me cold, and if it hadn’t been for the excellence of Brooker’s vocals and the musical settings, Reid’s shortcomings would have been considerably more apparent.

But, with that reservation, Procol’s Ninth is still a good album of music, indicating more positiveness [sic] than Exotic Birds And Fruit ever did.

One senses that Gary Brooker could well fancy his chances with Joan Bakewell.

Procol Harum are of course, the very essence of BBC2 talkshows: British with a smattering of artiness, rough-hewn and earthy but no more than you'd find down in the Ambridge 'Bull'; and, of course, their music is strongly traditionalist with most riffs still traceable back to Brooker, Copping and Wilson's r'n'b days with the Paramounts. 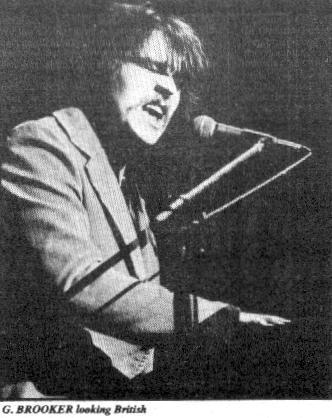 They are also quintessentially English in that they take their status as a cult band so thoroughly for granted. Rather like Tory MPs with undeniably safe seats, in fact.

Including a twenty-minute interval Procol Harum were on stage for some three hours. The time was filled with their greatest album cuts. And the onus appeared to be on the audience to be thoroughly familiar with all the numbers.

Even so, the band almost blew  the second (and final) date of their UK promotional tour for the new album. The first couple of numbers (both from Home), indeed, were such tangled heaps of static top that it didn't seem too improbable that Leiber and Stoller – the producers of Procol's Ninth – were up at the mixer attempting to give the boys a truly ethnic r'n'b sound. To the bone certainly. Procol Harum's sound was happening in the circle however. The mixer is in the circle at the Palladium.

Without Whaling Stories, their fourth number, the band may as well have knocked the first hour and ten minutes on the head. Brooker – who'd obviously sussed that even Conquistador, the previous number, hadn't totally cut it – sang the song's intro at piano with an almost desperate sense of histrionics that were thoroughly soundwashed by Chris Copping's Garth Hudson organ sound-alikes. [see here]

It was pleasing to see Mick Grabham able to so thoroughly parody the hod-carrier-as-lead-guitarist stance without omitting to droop his eyelids during the solos that he scratched deep into the number.

With Cartwright's almost comatosely restrained bass playing and BJ Wilson's hyper-active drum-kit the fourth number was a successfully grandiose as a non brain-storming Ken Russell. Even so, the prime memory at the end of the second half was of Brooker's penchant for descending chord scales [sic] and Wilson's love for his cymbals.

B J Wilson – with his kit stage right of the rest of the band – is a supreme drum technician. Procol, however, have a tendency to pull the whole band as a rhythm section number during which Wilson's playing becomes so neurotically busy that prolonged exposure would certainly result in severe high-hat OD.

The first half, though, just did not happen. People from the band's record company expressed mild concern. Viv Stanshall emceed the second half – as he had the first – in a none-too disguised attempt to vibe up the audience. He was largely successful.

Then came Part Two. The band hustled through the set knocking out piece after piece with much added funk, and staying well clear of the near-pedantry they'd steered too close to in the first half. Butterfly Boys from Exotic Birds and Fruit, Unquiet Zone and Piper's Tune from the new album, and Grand Hotel. Plus many more.

Globules of sweat flew off of Brooker's head as he made the transformation from the neo-Gilbert O'Sullivan persona he'd presented earlier to a foot-stompin', piano poundin' Southend variant on Jerry Lee Lewis.

Then – just to put the audience back in their place as it were – Procol Harum ended their set with The Blue Danube. And Brooker probably does want to play Hamlet.

Two encores including the thoroughly redundant Eight Days A Week and that certain first hit single (during which the curtain was dropped. Always gets the audience off, that). And that was it. Enough for Procol to have saved their skins with the second part of the show.

Even so, the individual abilities, the subject matter of the number, and the general mystique, all promise so much more than is actually delivered.

[setlist here: an entirely different view of this gig is here] 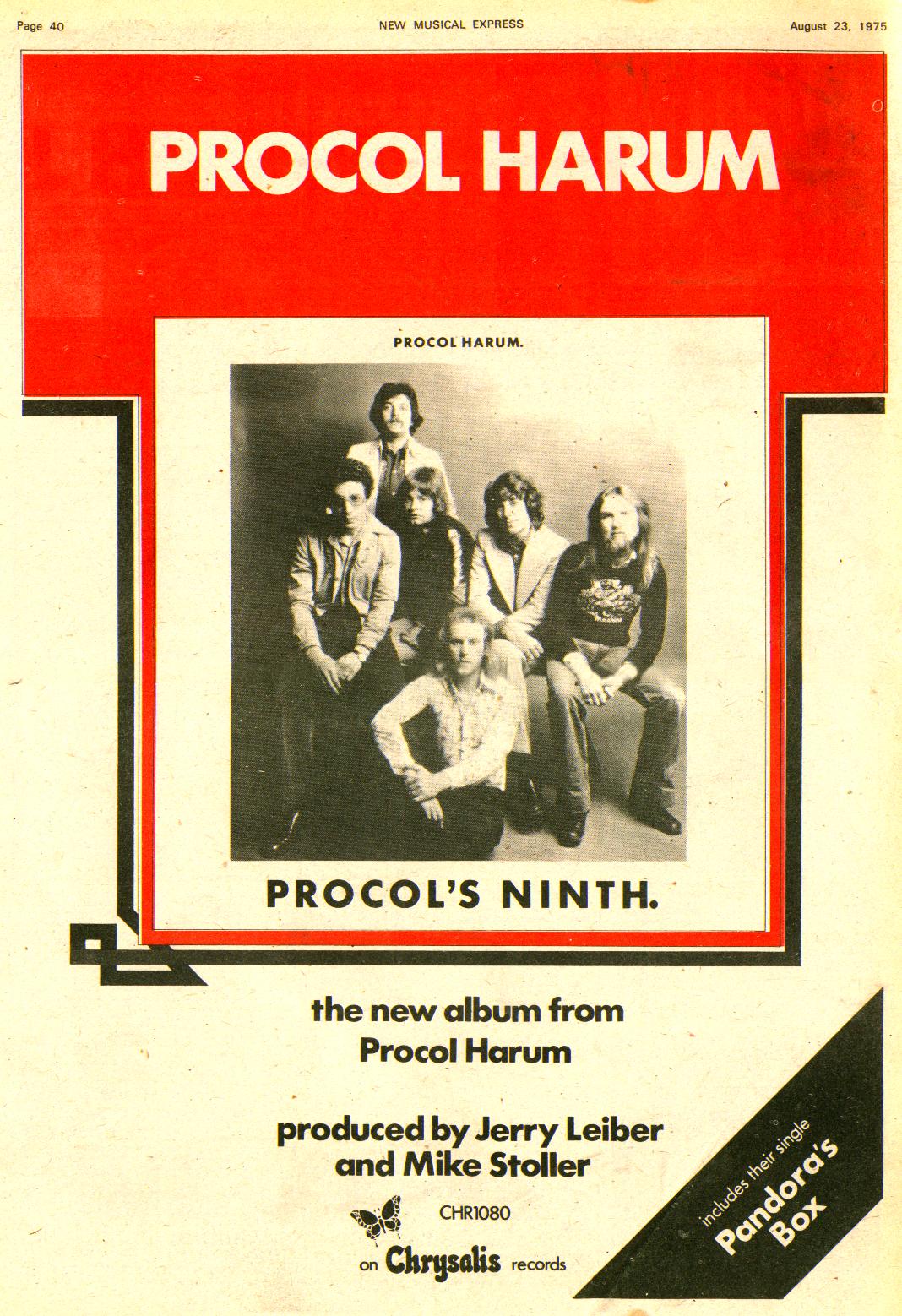 Read also the review of Procol at the Orange Festival, from this issue of NME