These excerpts from New Musical Express, kindly selected for 'Beyond the Pale' by Yan Friis, show 'Harum make it second time around' in the single and the album charts.

RAINBOW RE-OPENS
The Rainbow Theatre in London's Finsbury Park - acclaimed as Britain's leading rock centre during its brief four-month span until it closed down in early March - is to re-open shortly.

The lease on the premises has been acquired by a specially formed company run by Chris Wright and Terry Ellis, who are also the bosses of the Chrysalis organisation.

Artists and groups recording for the Chrysalis label, or handled for management or agency by Chrysalis, will be among the first attractions featured at the re-born Rainbow. These include Jethro Tull, Ten Years After, Procul [sic] Harum, Cat Stevens, Black Sabbath and Edgar Broughton.

There's also a Beach Boys live album headline (with pic and story, but I have cut out the piece with the headline unfortunately)

The chart is dated May 23, so it is more or less exactly 5 years since the song made its début!

RAINBOW IS RE-OPENING
(a more detailed version of the front page story, but Procol Harum (correctly spelled this time) is only mentioned once among the same artists (and a couple more) as on the front page.)

...Subsequent attractions will include J. Geils Band, Quintessence, the Strawbs, Wishbone Ash and Procol Harum. Booker John Martin says that the Friday-night concerts will run through the summer. "They are a revival of the first-ever rock sessions at the Lyceum," he added.

Main album reviews:
In Concert, Janis Joplin
Free For All, Free (sic! - the title would of course become Free At Last)
At His Best, Jimi Hendrix
The Road Goes Ever On, Mountain
Sailin' Shoes, Little Feat
A Possible Projection Of The Future / Childhood's End, Al Kooper
Obscured By Clouds, Pink Floyd
Music Of My Mind, Stevie Wonder
Phase III, The Osmonds

Inside: Bolan / ELO / Neil Young / John Entwistle / Steve Marriott (and some more, but piece cut out)

HARUM MAKE IT SECOND TIME AROUND
One of the most amazing happenings in the singles chart for some time is the re-entry of Procol Harum's five-year-old smash hit A Whiter Shade Of Pale.

It couldn't have happened to a better group. Harum are undoubtly the finest thing to emerge in the last decade, although they are still much more popular in America than here.

The single, re-released on the Fly label, also includes the two records that followed-up Whiter Shade Of Pale, Homburg and A Salty Dog.

Singer-pianist Gary Brooker and Keith Reid are the group's leading lights. Reid's active part only involves somgwriting, but without him they probably wouldn't have had even a fraction of their success.

Reid writes the words and Brooker supplies the music, and up to now dozens of numbers have been put to wax.

When Brooker first met Keith Reid he was still with a group called The Paramounts. Reid had written the words to A Whiter Shade of Pale. Brooker gave them a tune. And as they say, the rest is history.

Procol Harum have had numerous personnel changes, but the standard of their music has never suffered. The In Concert With The Edmonton Symphony Orchestra album is typical of the faultless perfection of their music. At this live concert with an audience of 3,000, they were also backed by the 24-piece De Camera Singers.

The two latest additions to Harum are guitarist Dave Ball and bass player Alan Cartwright, who joined after the recording of Broken Barricades. Ball replaced Robin Trower, now one of the founder members of Jude.

Until Cartwright came in, Chris Copping had been doubling on bass and organ. Now Copping can concentrate on the latter instrument.

Cartwright and drummer BJ Wilson create a tight rhythm behind the piano, guitar and organ lead.

The group have just returned from Japan, and will play some British venues before leaving for America on June 19 for about a month. 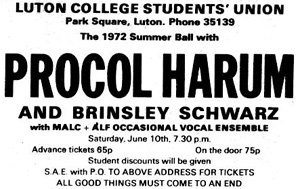 Main albums reviewed:
So Tough, The Beach Boys (reviewed by Bruce Johnston!)
The Rise And Fall Of Ziggy Stardust And The Spiders From Mars, David Bowie
Nature Planned It, Four Tops
Wind Of Change, Peter Frampton 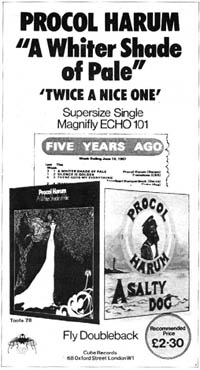 By the way, interesting to note Tony Tyler's reaction to the first Roxy Music album:

...Altogether, this is the finest album I've heard this year and the best 'first' I can EVER remember.

And that concludes the first half of 1972. A good half year it has been too, at least concerning media coverage. Disappointing though, that their re-releases got more attention than the new album. But as we have seen, that's not the media's fault.

But why on earth doesn't the NME cover Procol Harum's concerts? There's so much live stuff in the 1972 issues, but nothing at all on them. Maybe in the second half?