These excerpts from New Musical Express, kindly selected for 'Beyond the Pale' by Yan Friis, herald the advent of Pete Solley, a live show and an impending BBC engagement. Otherwise it's Punk time, with the only Procol feature, 'life after death', relating to the Liquorice John sessions six years before!

Procol Harum are to top a special one-off concert in York Museum Grounds on Sunday, July 4, as part of that city's Arts Festival. No other gigs by the band are planned at this time.

PROCUL HARUM [sic] have undergone a line-up change, with the departure of bassist Alan Cartwright. Keyboards player Chris Copping now reverts to his original position of bass player, while new man Pete Sollie [sic] comes in on the keyboards.

Sex Pistols hit the front page, 2/3 covered by a picture of Johnny Rotten (the rest covered by a Dr Feelgood pic).

Centre spread story on Pistols, concerts by The Damned and Buzzcocks reviewed.

And ABBA is No. 1 with Dancing Queen.

There's no room for Procol Harum in this brave new world...

Encounter: What Angie does while Bowie's in Paris with Eno (big pic of Eno)
Ecstasy: Robert Palmer and his regiment of women
Probe: S&M special (safety pins & macho, to you)
Thrust: 10cc take their partners in two way 'split'
Sex: Pistols-whippings in the Valley of the Dolls
Penetration: Feelgoods, Skynyrd, Todd, Clapton tour news

PROCOL HARUM LIFE AFTER DEATH SHOCK
Armed with a plentiful supply of best brandy and champers, five musicians calling themselves Liquorice John Death And The Rock 'N' Roll Allstars went into the Abbey Road studios one evening during the winter of 1970. With only the occasional break for refreshments they recorded over 30 songs during a solid 12-hour stint. 'Great Music!' they congratulated themselves blearily.

Unfortunately Liquorice John's tapes were locked away, and became one of the best kept secrets of the rock biz. It appeared that the public would never be acquainted with either the band or their music.

Six years later the recordings somehow found their way into the hands of Roger Scott, a DJ on London's commercial radio station, Capital. He slipped a cassette to his colleague Nicky Horne, and on last Monday night's edition of his programme Your Mother Wouldn't Like It he gave the band their first public airing. 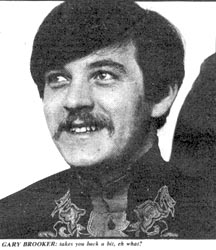 Well, actually it is. Hiding behind that unlikely pseudonym are present and former members of Procol Harum, namely Messrs Gary Brooker, BJ Wilson, Chris Copping and Robin Trower. And their old mate Jack Lancaster (then with Blodwyn Pig) popped along to supply the sax parts.

Even more surprising is that these maestros of dicky-bow rock should play rock 'n' roll like Kansas City, Lucille, The Girl Can't Help It, Matchbox, and Keep a-Knockin'.

As Procol and Trower are out of the country, they were unable to comment on the broadcasting of the tapes, but the band's manager Nick Blackburn was willing to reveal just how and why the tapes were made available to Capital.

Procol - or at least someone acting on their behalf - apparently thought it a good idea to offer them to Scott to play on his afternoon radio spot, Cruisin', because they were fun recordings and might be of novelty interest to the public. Besides, they're also out of the country, have no album release planned and the interest Liquorice John will create may help to keep their name in the punters' heads.

Of course Nick denies they could be using the broadcasts to see what kind of feedback they receive and so decide whether or not to release the 13 tracks, mixed by Chris Thomas, as an album. 'There was no intention of a commercial release,' he states. [But it was released: see here!]

He also thinks that the tapes dismiss the myth that Procol are solely a classical rock band. 'They can play rock 'n' roll better than the heavy rock groups,' he says. 'They've got a great feel for it.' Their musical taste is so comprehensive, he adds, that they once encored with I Shot The Sheriff on a Rumanian tour.

But what if the public response to the Capital airings is good? Will you then consider a commercial release'?

'No comment,' responds Mr Blackburn amiably. 'I don't know. I haven't thought about it.'

Obviously, he continued, Procol would be flattered if a general release was requested. 'And I think the tapes are strong and could be released. But that's just a personal opinion.'

Future developments will be reported in due course, folks.

Most of the running orders has now been finalised for the New Year In Concert series, to be transmitted simultaneously by BBC-2 and Radio 1 in stereo. Radio 1 producer Jeff Griffin, who is in charge of the series, has set Renaissance to open on Saturday, January 8 - followed by the Jess Roden Band (15), Santana (22), Rory Gallagher (29), the Chieftains (February 12), Jethro Tull (19), Kiki Dee (26), Gallagher and Lyle (March 5) and Procol Harum (12).