'Vox' (founded 1990) is a British monthly music-glossy much in the mould of 'Q' and 'Mojo'.
If you happen to spot the odd error or omission in the following article, why not drop a line to
Victoria Segal, editor of 'Vox Pops' (the letters page): victoria_segal@ipc.co.uk?

'Fly-fishing, all-star hoe-downs and that song'

Among the plethora of 30th anniversaries which are cropping up throughout 1997 ('Sgt Pepper', Radio 1, the Summer of Love, etc.) we have now been living for a full three decades with that unique blend of Bach-like organ chords and soulfully sung oblique lyrics that was Procol Harum's 'A Whiter Shade of Pale'. The third biggest single of 1967 (it was outsold by Englebert Humperdinck's 'Release Me' and 'The Last Waltz') this is one of those records which radio will never let go. Somewhere today, on one station or other, somewhere in the UK (let alone the rest of the world, where it enjoys similar popularity), 'A Whiter Shade of Pale' will be played, and hundreds of listeners will be delighted to hear it. Like 'Stairway to Heaven' and 'I'm Not in Love', the song hangs permanently in the ether.

Though you'd think that by now he would wish it transported to the far side of the galaxy, the song's immortality doesn't seem to be a problem for its vocalist and co-writer Gary Brooker. Most long-standing rock acts have an 'albatross', in the form of an early big hit which the public still loves but the band want to bury, and 'Whiter Shade ...' should be Brooker's, but it seems he's happy to keep singing the song live for as long as people want to hear it. Since he's very much still around and performing, and on the basis that anyone paying to see him is going to want to hear that, it looks like he'll be singing it until the day he drops.

Gary has made the odd attempt to let the old dog die. Procol Harum lasted longer than you probably realize (if 'A Whiter Shade of Pale' is all they mean to you) and toured and recorded for ten years before calling it a day in the spring of 1977. Brooker went on to have a semi-successful solo recording career for a few years, after which he variously joined Eric Clapton's band, side-stepped the music biz for a while to become a champion fly-fisher, and got a band together with Andy Fairweather-Lowe [sic].

Then, in 1991, there was a Procol Harum reunion, which may well have passed you by since the resultant album, 'The Prodigal Stranger', wasn't particularly big over here, and the lengthy round of touring barely took in the UK. The band called it a day again after 1992, but Brooker and the others briefly reunited in August 1995 for a one-off [sic!] Procol Harum concert at London's Shepherd's Bush Empire. Guess which song was the highlight of the show for 99 percent of the audience? Yep, that's right. 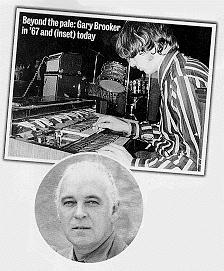 Although Gary spends a lot of his time off the road nowadays composing (and presumably still fly-fishing), you can check for yourself that neither he nor 'A Whiter Shade ...' are missing in action by watching out for, and star-spotting at, Brooker's next annual Xmas charity concert (usually held in December at Chiddingfold Club in Surrey). Or, if you fancy a trek to the States or Japan (because they don't play here), look out for the next stadium foray by Ringo Starr's All-Starr Band -- a caravan of celebs ranging from Billy Preston to John Entwistle and Jack Bruce. When Gary is featured vocalist, his songs are, of course, the classic Procol Harum numbers: 'Conquistador', 'A Salty Dog', and -- well, you know the other one.

A Procol Harum best-of album, 'Halcyon Daze', is out now on Music Club. (as BtP predicted!)

The illustration  caption: 'Beyond the pale: Gary Brooker in '67 and (inset) today'  shows how Fisher has turned into Brooker over the years!